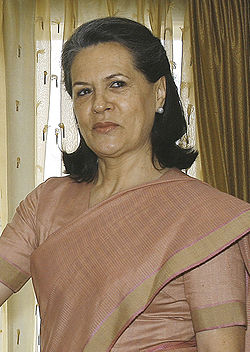 Sonia Gandhi, the soon to be replaced president of the Congress party if media reports are to be believed, is leading the charge against the land acquisition bill. And this is very ironical given that it was the Congress party which created the land acquisition mess in the first place.
Until 2013, land acquisition in India was governed by the Land Acquisition Act 1894. This Act came into being during the period of British rule in India and survived for nearly 120 years.
A 1985 version of this Act stated: “Whenever it appears to the [appropriate Government] the land in any locality [is needed or] is likely to be needed for any public purpose [or for a company], a notification to that effect shall be published in the Official Gazette [and in two daily newspapers circulating in that locality of which at least one shall be in the regional language], and the Collector shall cause public notice of the substance of such notification to be given at convenient places in the said locality.”
Given the fact that the Act was a remnant of the British era, it gave enormous powers to the government to seize almost any land that it wanted to. The British were the rulers of India, and not a democratically elected government. They could do what they wanted to.
The surprising bit was that the Land Acquisition Act 1894 managed to survive through 66 years of independence as well. It was abused by almost all governments over the years. The governments seized land from people and handed them over to corporates who made a killing. It would be safe to say that many politicians also benefited in the process.
The humble farmer whose land was being seized saw this happen. The land that was acquired from him at a pittance(if at all anything was paid) by the government was handed over to private parties and everyone except the farmer benefited in the process.
Hence, the trust that is required for any system to work completely broke down. And this will not be easy to repair. Unless this trust is rebuilt land acquisition for business purposes will not be easy at all. The farmer or individuals whose land is being acquired need to start to feel that they are not being taken for a ride.
Further, given that governments acquired land for them, Indian corporates have become lazy over the years. Also, many of them started to see themselves as landlords and wanted land just for the heck of it. This can be said from the inefficient use of industrial land in India.
Let me first share something from personal experience. I grew up in Ranchi, which had many public sector enterprises. The biggest of them all was the Heavy Engineering Corporation (HEC). It was built on land acquired from farmers. But only a small portion of the total amount of land that was acquired was ever put to use. Large portions of land at HEC were simply lying unused.
Professor R Krishna Kumar makes a similar point in a recent column in The Hindu Business Line in a more precise way: “Japan uses a mere 1.9 million hectares for residential and industrial use. This is only 5 per cent of their land; forest cover in Japan is a whopping 67 per cent. Compare this with the 22 million ha of Indian non-agricultural land. That is, Japan uses less than 10 per cent of the non-agricultural land available in India to produce three times more industrial output! The inefficiency of Indian industry in land-use is glaring.”
Hence, those corporates who have acquired land over the years haven’t put it to efficient use, given that they haven’t paid for it or got it an extremely concessional rate. One look at the five-star campuses of Indian IT companies should make this clear as well.
The Congress party was in power for most of these 66 years with only brief interludes where other coalitions came to power in Delhi. And it chose not to do anything about the 1894 Land Acquisition Act, for nearly six decades, even though it was in power in every decade after independence. In 2013, the party put forward The Right to Fair Compensation and Transparency in Land Acquisition, Rehabilitation and Resettlement Act 2013, which went to the other extreme and brought all land acquisition to a standstill.
Hence, the party protesting against the The Right to Fair Compensation and Transparency in Land Acquisition, Rehabilitation and Resettlement (Amendment) Ordinance, 2014, which is nothing but the Congress 2013 Act with a few amendments, is nothing but sheer hypocrisy. After taking the people of this country for ride on more than six decades, the party suddenly seems to have discovered its humane side.
To conclude, for the land acquisition system to start working again the trust that has been lost needs to be rebuilt. For this to happen the government needs to proceed very carefully. As Namita Wahi writes in a column in The Indian Express: “Acquisition of land by the state for private industry must only be done upon the showing of a demonstrable public purpose in each case.” And that is very important.

The column originally appeared on Firstpost on Mar 18, 2015