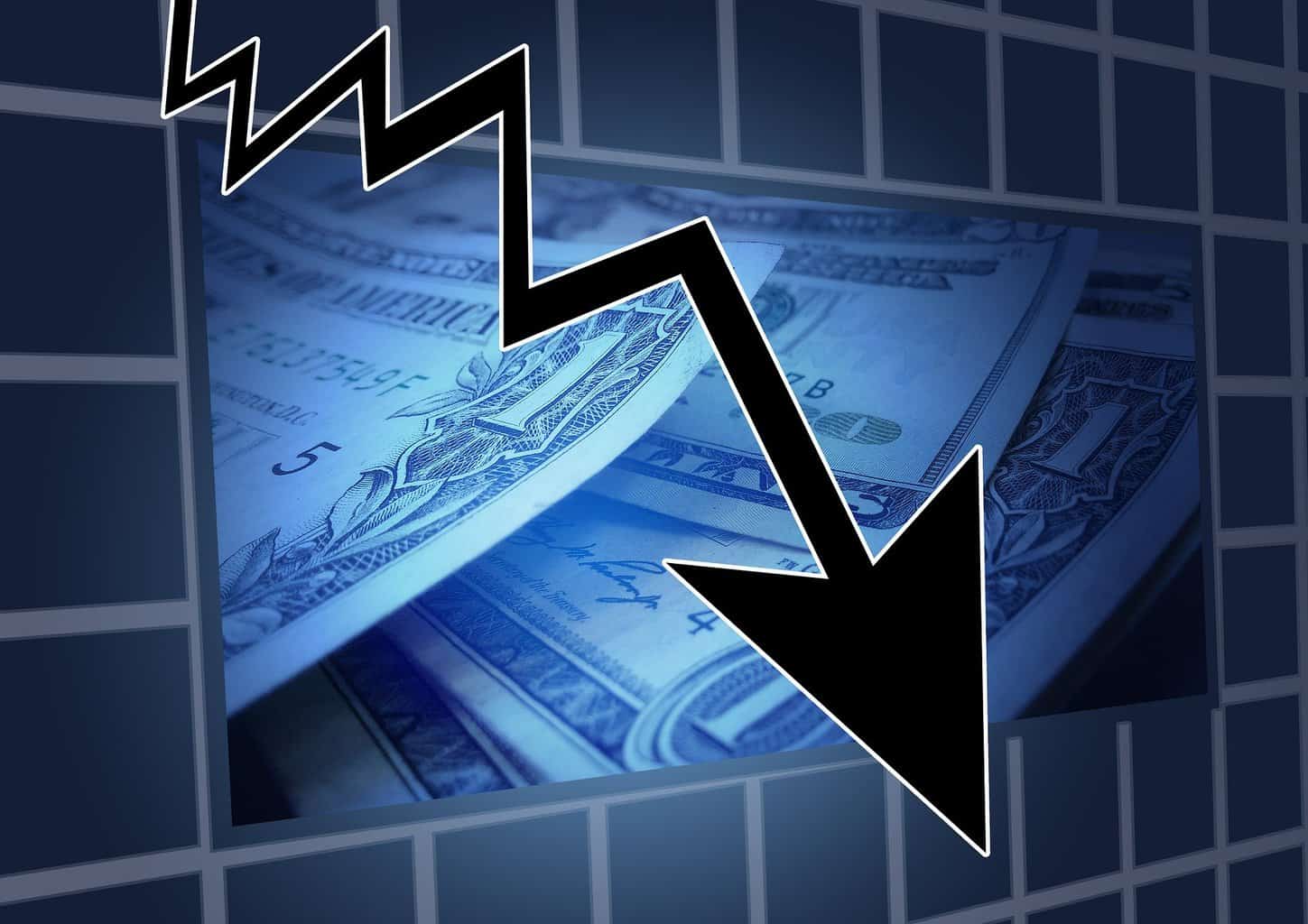 Almost all large economies in the world, other than China, are in the midst of a technical recession, with their gross domestic product (GDP) having contracted for two or more quarters. On Friday, India became the latest large economy to enter this list. The spread of the covid pandemic and a big fear of a possible second wave, have led to consumers and businesses being very careful in the way they spend their money and saving for a possible rainy day.

What is a technical recession?

When the GDP of any economy contracts for two consecutive quarters, economists refer to the situation as a technical recession. GDP is a measure of economic activity and size of a country. Let’s take the case of the United States. The GDP contracted by 9% between April and June 2020 in comparison with the same period in 2019. It contracted again by 2.9% between July and September 2020. So, as of end September, the American economy was in a technical recession.

If we consider the United Kingdom, the economy has contracted in each of the periods between January to March, April to June and July to September, by 2.1%, 21.5% and 9.6%, respectively. Hence, the country has been in a technical recession since the end of June. The only exception to this has been China, which has grown by 3.2% and 4.9%, respectively, between April and June and July and September.

How is a technical recession different from a recession?


An economic scenario where the economy of a country has been contracting for a long period of time, is referred to as a recession. The trouble is there is no standard definition for how long is long. The National Bureau of Economic Research in the United States defines a recession as “a significant decline in economic activity that is spread across the economy and lasts more than a few months”.

Hence, if the current decline in economic activity across countries continues in the months to come, then we can safely say that we are in the midst of a recession. The spread of covid has led to economic activity slowing down. Businesses in order to continue to exist have slashed salaries and/or fired people. Even those who haven’t been fired live with the fear of getting fired. All this has led to a slowdown in people and businesses spending money.

When was the last time the world was in a recession?


Lehman Brothers, the fourth biggest investment bank on Wall Street, went bust in mid-September 2008. Many other financial institutions came under huge financial stress and had to be rescued by the governments and the central banks of the United States and Europe. The trouble spilled from Wall Street to Main Street and a recession hit the Western economies.

The central banks in the Western world printed a huge amount of money to drive down interest rates, in the hope that people will borrow and spend, and businesses will borrow and expand. A lot of this money found its way into stock markets all across the world. The interesting thing is that even in 2020 the central banks are using the same formula. They have printed a lot of money to revive economies. The Federal Reserve of the United States has printed more than $3 trillion between end of February and now. 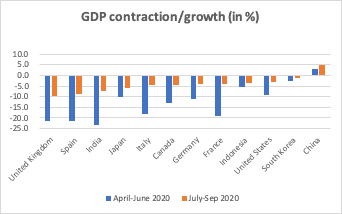 When did India enter a technical recession?

Why has this happened? Private consumption, or the stuff that people buy, and which forms more than half of the Indian GDP, has completely collapsed. Between April and June, it contracted by 26.7%. It contracted by 11.3%, between July and September. As mentioned earlier, this is primarily because of people saving more for a rainy day. This can be gauged from the fact that deposits in the Indian banking system have gone up 6% or Rs 8.1 trillion between end of March, when covid first started to spread in the country, and now.

How can the world get out of this economic mess?


The British economist John Maynard Keynes had a term for a situation like this – the paradox of thrift. When a society as a whole saves substantially more, it hurts the economy, simply because one man’s spending is another man’s income. Hence, in recessionary times, when individuals and businesses are spending less money, the government needs to chip in and spend more money than it usually would have.

This spending puts more money in hands of people. And if they go out there and spend it, it helps in economic revival. The trouble is that thanks to a recessionary environment, tax collections have collapsed. Some governments have resorted to printing more money to finance extra expenditure and hoping to create growth. But not every country has this option because money printing can lead to higher prices or inflation, as a greater amount of money chases the same set of goods and services.

This piece originally appeared in the Khaleej Times on November 30, 2020.

Promises are meant to be broken, especially in politics.

Narendra Modi, the prime minister of India, in the run-up to the 2014 Lok Sabha (the lower house of Indian Parliament) had promised “minimum government and maximum governance” to the citizens of India.

He has clearly forgotten the minimum government bit of that promise. At least that is the way it seems from the third annual budget, for 2016-2017, presented by Arun Jaitley, the finance minister in the Modi government.

The allocation to the Mahatma Gandhi National Rural Employment Guarantee Scheme (MGNREGS), a scheme of which Modi has been severely critical of in the past, has been set at Rs 38,500 crore ($5.62 billion) for 2016-2017.

This is the highest allocation ever to the scheme. The scheme guarantees work for 100 days in a financial year to every household whose adults are willing to do unskilled manual work. The trouble is it doesn’t lead to the creation of any useful assets and hence, more or less works as a dole.

Also, the scheme doesn’t benefit many of those it is intended for. The economist Surjit Bhalla has called MGNREGS as the fourth most corrupt institution in the world after FIFA, the BCCI (the institution that governs cricket in India) and the public distribution system used by the Indian government to distribute food grains as well as kerosene to the poor.

The allocation to food subsidy stood at Rs 1.35 lakh crore($19.7 billion) down a little from Rs 1.39 lakh crore($20.3 billion) last year. The government sells rice, wheat and sugar at subsidised rate through 5.5 lakh( 0.55 million) fair priced shops, which form the public distribution system, throughout the country. The trouble is the system is extremely leaky and a huge proportion of the food grains are siphoned off and get diverted into the open market.

A committee to fix up this system was set up very soon after the Modi government came to power. It submitted its report in January 2015. The recommendations of the committee haven’t been taken on.

The government also sells fertilizers to farmers at a subsidised price. The subsidy towards this has marginally fallen to Rs 70,000 crore ($10.2 billion) from Rs 72,438 crore ($10.6 billion) during the last financial year. This small fall is because of a fall in fertilizer prices. This system is also extremely leaky and only around 35% of urea (a kind of fertilizer) actually reaches the small and marginal farmer it is meant for.

The same is true about kerosene as well, which the government distributes through the fair prices shops. Nearly, 46% of the kerosene is siphoned off. The allocation towards petroleum subsidies this year is at Rs 26,947 crore ($3.9 billion) against Rs 30,000 crore ($4.4 billion) during the last financial year. But what needs to be kept in mind is that oil prices have fallen during the last one year.

What this tells us very clearly is that as far as subsidies are concerned Narendra Modi has been no different from his predecessor Manmohan Singh and continues to run full throttle, what is a very leaky system.

Further, the government continues to own 27 banks. Since 2009, the government has invested around Rs 1.02 lakh crore in these banks to recapitalise them. The banks have given loans to crony capitalists close to the previous government, which they are now unable to recover.

For the next financial year, the government has allocated a further Rs 25,000 crore ($3.65 billion) to be invested in these banks. Jaitley also said that “if additional capital is required by these Banks, we will find the resources for doing so.”

What Jaitley meant here was that the government would do “whatever it takes” to keep these banks going.

The question that Jaitley did not answer is—why does the government need to own 27 banks? Over and above this, the government continues to own and run loss making companies. Until March 2014, the accumulated loss on these companies was Rs 1.04 lakh crore.

The government has also talked about selling some assets of these firms. As Jaitley said, we will encourage these companies to “divest individual assets like land, manufacturing units, etc. to release their asset value for making investment in new projects.”

The government also decided to set up a Higher Education Financing Agency (HEFA) with an initial capital base of  Rs 1,000 crores. As Jaitley said in his speech: “The HEFA will be a not-for-profit organisation that will leverage funds from the market and supplement them with donations and CSR funds.”

The question here is why not just allow education to be run as a for-profit business, legally. Currently, most private education institutes in India are owned by politicians, and are conduits as well as generators of black money. Black money is essentially money which has been earned but on which taxes have not been paid.

Now this doesn’t mean that there was nothing good in the budget. Here are some of the good points. The government buys rice and wheat from the farmers directly at a price referred to as the minimum support price. The benefits of this direct buying are concerned by farmers in a few states like Punjab, Haryana, Andhra Pradesh etc.

The government has plans to extend procurement of food grains to other parts of the country. It has plans of setting up an online procurement system through the Food Corporation of India.  Given that, a government benefit is available, it should be available throughout the country and not only in certain states.

A major problem that the Indian farmer faces is getting his produce to the market before it goes bad. As the finance minister Jaitley said in his speech: “A lot of fruits and vegetables grown by our farmers either do not fetch the right prices or fail to reach the markets.”

In order to tackle this the government plans to implement the “Unified Agriculture Marketing Scheme which envisages a common e-market platform that will be deployed in selected 585 regulated wholesale markets.”

Another interesting move in order to tackle produce going bad is allowing “100% FDI…through FIPB route in marketing of food products produced and manufactured in India.”

One of the major successes of the Modi government since coming to power has been electrification of villages.  As of April 1, 2015, 18,542 villages were not electrified. Between April 1, 2015 and February 23, 2016, 5542 villages were electrified. This was more than the total combined achievement of the last three years. Also, the government has promised 100% electrification by May 1, 2018.

The government is also trying to create jobs and plans to invest Rs 2,18,000 crore in roads and railways during the course of the year.

To conclude, while the government is trying to do the right things on many fronts, but by trying to run every business possible, it is just overextending itself.

And that is something that could have been easily corrected in this budget. Sadly, an opportunity has been lost.

The column originally appeared in the Khaleej Times on March 1, 2016, with a different headline.