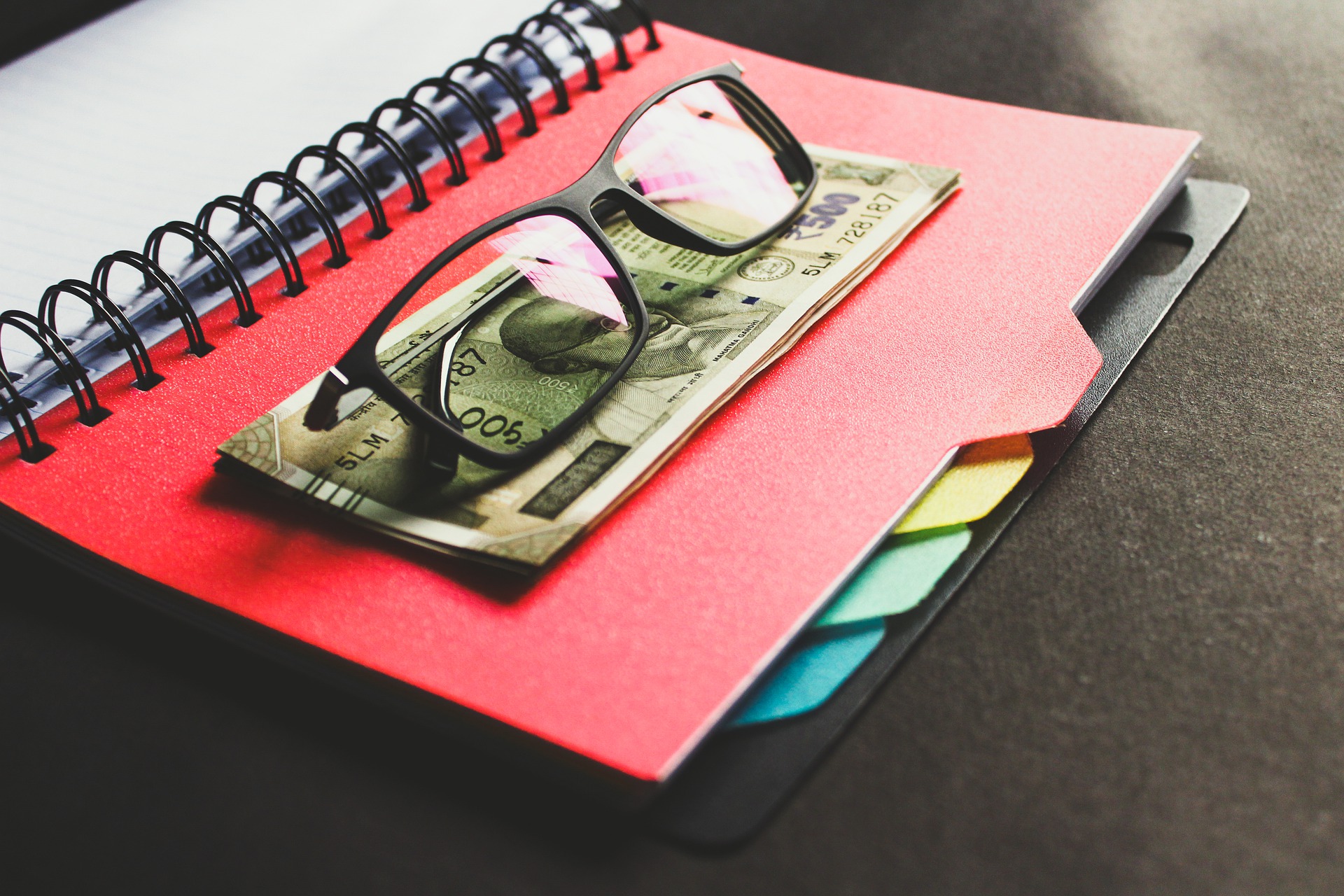 In all this, it is hardly surprising that the Reserve Bank of India (RBI), with Shaktikanta Das at its helm, has also padded up and gotten into the business of narratives and spin. Before I explain this in detail, let me give you some background to this piece.

In November 2016, the central government demonetised Rs 500 and Rs 1,000 notes. The citizens had to deposit these notes into their bank accounts. The result was that 86% of the currency by value suddenly went out of the financial system.

Paper money has different uses, but its main use is as a medium of exchange. It basically facilitates the process of buying and selling. Of course, if people want to, the process of exchange can be carried out through other means like issuing a cheque, making a demand draft, carrying out a money transfer or even paying money digitally.

But India back in 2016 was a country which believed in operating in cash. When the cash went out of the system, the economic transactions especially in the informal sector took a beating. The gravity of the situation never really came out fully, except perhaps anecdotally, given that the government data collection for the informal part of the economic system was and continues to remain abysmal. I guess, which is why it is called an informal sector in the first place.

My contention over the years has been that the cash in the system will eventually rise to touch the pre-demonetisation level. Earlier this year, in April 2020, writing in the Mint, I had said: “The cash in the system [as of March 2020] works out to 12% of GDP.” I had made this calculation on the basis of the currency in circulation as of March 27 and the GDP forecast for 2019-20 (up until then, the actual GDP numbers were yet to come in).

A formal confirmation of this came yesterday with the RBI  releasing its annual report. In the annual report, the RBI says: “The currency-GDP ratio increased to its pre-demonetisation level of 12.0 per cent in 2019- 20 from 11.3 per cent a year ago, indicating the rise in cash-intensity in the economy in response to the pandemic [emphasis added].” The currency in circulation constitutes of cash with banks and cash with the public.

Before analysing this statement, let’s look at the following figure, which plots the currency in circulation to the GDP ratio or the cash in the system, over the years.

Cash in the System 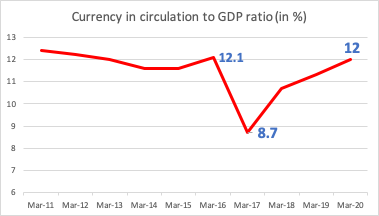 In March 2017, a few months after demonetisation was carried out and after the whole country had queued up to deposit the demonetised Rs 500 and Rs 1,000 notes into their bank accounts, the cash in the system fell to 8.7% of the GDP.

The reason for this was very straightforward; the government and the RBI couldn’t replace the cash in the system at the same pace as they had taken it out. There were all kinds of problems, including banks having to reset ATM trays in order to take care of the smaller size of the new notes.

As of March 2020, the cash in the system is back to 12% of the GDP, which is at an almost similar level of 12.1% of the GDP as of March 2016, before demonetisation was carried out. The RBI feels this has happened because there has been a dash for cash in light of the spread of the covid-19 pandemic. People hoarded on to more cash than they normally do and this led to a faster rise in the cash in the system than it normally would have.

The point to be remembered here is that we are talking cash in the system as of March 2020 and not August 2020. At that point of time, people had just started to take covid-19 seriously. Let’s take a look at the monthly increase/decrease in currency in circulation during the course of 2019-20.

Changes in currency in circulation 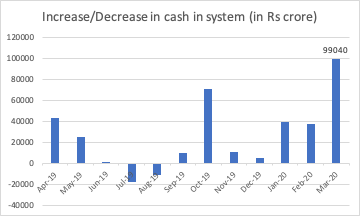 Source: Author calculations on data from Reserve Bank of India.

It is very obvious from the above chart that at Rs 99,040 crore, the maximum monthly increase in cash in the system during the year, happened in March 2020. Does this then imply that there was a dash for cash as the fear of the pandemic spread? In order to say this with surety we will have to look at weekly increase in cash levels in the system during the course of March 2020. 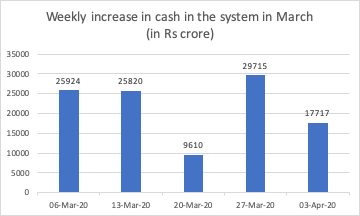 India went into a physical lockdown starting March 24, 2020. It is only around then that most of the country realised the gravity of the pandemic. This can be seen by increase in cash in the system in the week ending March 27. This implies a higher than normal increase in currency with public with a higher withdrawal of money from the banking system than would have been the case if all was well.

Let’s say if things had gone on normally then it is safe to say that the increase cash in the system in March would have been around 80-85% of what it eventually got to. At this level of increase, the cash in the system as of March end would have been around 11.95% of the GDP, which is not significantly different from 12.03% of the GDP, it eventually came to. The RBI’s dash for cash argument hangs on a few basis points.

While India of November 2016 was a country which believed in operating in cash, so is the India of March 2020. Yes, digital transactions have gone up along the way and that’s a good thing. But that could have happened anyway without putting the country through the trouble that demonetisation did.

Also, it is time we realised that people don’t store their black money in cash. In fact, data from a White Paper on black money published in May 2012 showed that around 4.9% of the total undisclosed income admitted to during search and seizure operations between 2006 and 2012 was held in the form of cash. Cracking down on black money is much more complicated operation than just cracking down on cash in the system.

Further, societies with more cash aren’t necessarily more corrupt. If that was the case Japan with a cash in the system of around 20% of the GDP would be more corrupt than India. On the flip side, Nigeria which has a cash in the system comparable to that of Norway, wouldn’t be a country as corrupt as it is. The government needs to make peace with this fact.

To conclude, I think one reason the RBI might have resorted to this spin and is trying to create a narrative, lies in the fact that when demonetisation was carried out, the current RBI governor Shaktikanta Das was the finance secretary.

My guess is that a part of Das still wants to justify demonetisation as a good thing and show it by telling the nation that the cash in the system rose to the pre-demo level simply because of the Covid-19 pandemic, something that wouldn’t have happened otherwise.

But as I showed above that is a very weak argument. It is time the RBI sang a different tune on this front and moved a dash for cash to Das for cash.