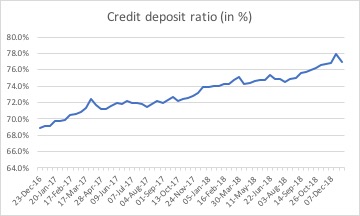 In December 2018, consumer price inflation came in at an 18-month low of 2.19%. After this, the government expects the monetary policy committee (MPC) of the Reserve Bank of India (RBI) to cut the repo rate when it meets next, in early February.  Repo rate is the interest rate at which RBI lends to banks.

What’s the problem with this argument?
A major reason why consumer price inflation has been low is because of low food inflation In December 2018, it was in a negative territory (-2.51%). RBI has no control over food inflation. Given this, let’s look at just core inflation (inflation after leaving out food and fuel items). In December 2018, it stood at 5.48%. If we take this rate of inflation into account, then the real rate of interest no longer remains one of the highest in the world, as the finance minister had said. It is at 1.32% (6.8% interest minus 5.48% inflation).

Which are the sectors leading the lending?
In November 2018, lending to the services sector went up 28.1%, whereas lending to retail went up 17.20%. Even industrial lending growth hit a two-year high of 4%, with lending to medium-level industry growing 11%. Sector wise details are available only up to November. The growth rates in December would have been even faster. In this scenario, banks will need more deposits to keep funding the increase in lending. So, are they really in a position to cut interest rates?

This originally appeared in the Mint on January 21, 2019.