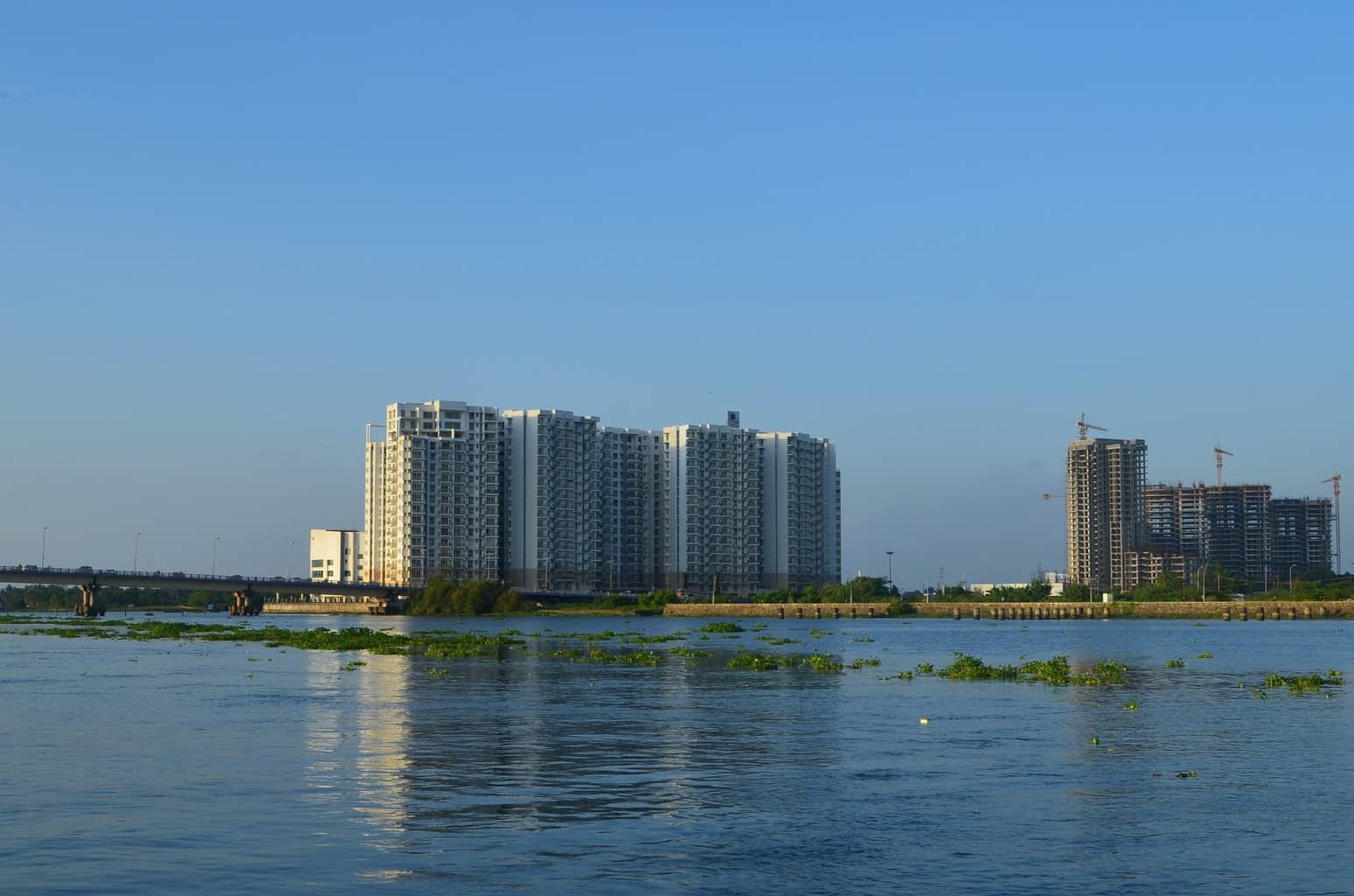 Yesterday evening I had gone to meet a cousin who lives in the Western suburbs of Mumbai. All along the way, there were billboards of Kotak Mahindra Bank advertising its home loans, which are available at an interest rate of 6.65%.

A few things have happened because of these low rates. There have been scores of stories in the media citing surveys where everyone from women to HNIs to NRIs to millennials seem to want to buy a house and they want to do it right here and right now.

Of course, these surveys have been carried out by real estate consultants, whose very survival depends on the real estate sector doing well. Incentives as they say.

Low interest rates on home loans also have led to stories in the media suggesting that this is best time to buy a house. The other thing that has happened is that analysts have been recommending stocks of home finance companies (HFCs).

The logic being that at lower interest rates people will take on more home loans. This will help the loan book of HFCs grow, making them good investment bets. How easy all this sounds? But is it?

All this stems from the flawed assumption that people borrow more at lower interest rates and live happily ever after. Let’s see if that is true or not.

Take a look at the following graph. It plots the increase in home loans outstanding during the period April to January, over the years. 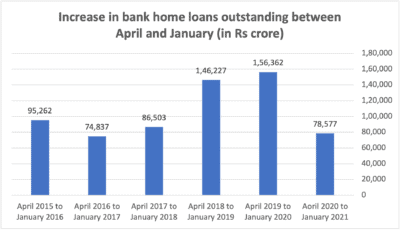 In fact, the increase between April 2020 to January 2021, was the second lowest in six years in absolute terms. The lowest increase of Rs 74,837 crore was between April 2016 to January 2017. This period included demonetisation when banks had more or less stopped doing everything else and concentrated on taking back the demonetised notes from the public.

If we look at the period between April 2016 to October 2016, before demonetisation happened, the increase in home loans had stood at Rs 64,501 crore. Clearly the disbursal of home loans slowed down in the post demonetisation months.

There is another point that needs to be made here. Other than banks, HFCs or home finance companies, also give out home loans. Typically, banks give out two-thirds of the home loans and HFCs, the remaining third. Nevertheless, the last couple of years haven’t been good for a few HFCs. This has meant that some of the business of home loans has moved from HFCs to banks.

Why is that the case? For economists and analysts, the interest rate is the most important parameter that people look at while taking a home loan, nevertheless, a little bit of common sense tells us that this isn’t the case.

Let’s try and understand this through an example. As per HDFC, India’s largest HFC, their average home loan size is Rs 28.5 lakh. Their average loan to value ratio at the time of giving the loan is 70%. This basically means that HDFC on an average gives up to 70% of the price of the home as a home loan.

This basically means that the average price of a home in the books of HDFC against which they give a home loan, stands at Rs 40.7 lakh (Rs 28.5 lakh divided by 70%). Let’s round this to Rs 41 lakh, for the sake of convenience.

What does this mean? It means that in order to buy a home, other than taking on a loan of the buyer first needs to make sure that he has savings of around Rs 12.5 lakh (Rs 41 lakh minus Rs 28.5 lakh) to make the downpayment on the home loan. Even if the money is available, he or she needs to make sure that they are in a position to spend that money. 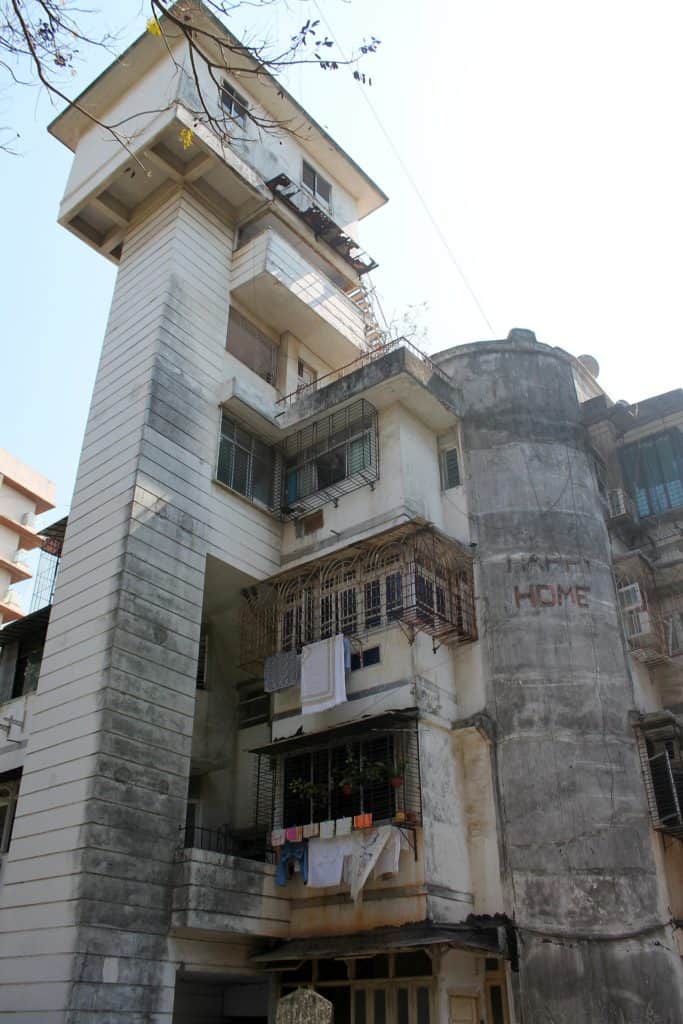 This is not where it ends. In many parts of the country a portion of the real estate transaction is still carried out in black. Money needs to be available for that. Further, a stamp duty needs to be paid to the state government. Then there is the cost of moving into a new house (everything from transport to perhaps new furniture).

Once we factor these things into account, we can conclude that the home loan forms around 50-60% of the overall cost of buying a house. Further, in a time like present, any individual thinking of buying a house will have to weigh the decision against the possibility of losing their job or facing a drop in income in their line of work.

So, yes, the EMI is lower. But what will the buyer first look at? The lower EMI or the ability to be able to pay the lower EMI and be able to continue paying it in the days to come. Of course, the buyer will look at his ability to pay the EMI and be able to continue paying it. Also, it needs to be remembered that the interest rate on the home loan is a floating one, and can rise in the years to come.

Hence, this decision will be based on the confidence that the buyer has in his or her own economic future. This is not something that can be measured at an aggregate system level and varies from buyer to buyer. The point being that everything that is important cannot necessarily be measured in numerical terms.

Having said that, the confidence in the economic future will be currently low, with many individuals losing their jobs or seeing their friends, relatives and acquaintances lose jobs. Hence, other than losing a job, there is also the fear of losing the job. There has also been a drop in their income or in some cases small businesses have been shutdown.

Also, whether it is the best time to buy a house or not, like most things in personal finance, it depends on your finances and more importantly your mental makeup of what you want from life. If you want to settle in life and make your parents and relatives happy, and have the money to do so, then now is as good a time as any to buy a home.

So, right now if you think you have enough money and enough confidence to keep paying the EMI, and want a home to live in, then please go ahead and buy one. Also, make sure that you have enough savings to pay the EMI for at least six months to a year, even without your main source of income.

To conclude, buying a home is not just about low interest rates. There are several other factors, which people who are in the business of selling real estate, seem to conveniently forget about.

Then there are surveys in which a high proportion of people end up saying they want to buy a home to live in. Of course, they do. But just wanting to do something doesn’t add to demand. I mean, I want to buy a house in central Mumbai, but I also know that ain’t going to happen. My finances don’t allow it.

I know I am kind of going overboard with the analysis of the data released by the Income Tax department last week, but believe me it is necessary, to show how loaded things are against people who actually pay income tax.

Last week, the Income Tax department released some very interesting data-the kind of stuff that it had not released for a while.

Take a look at the following table:

This table tells us that the average income of individuals filing an income tax return is around Rs 4.40 lakh.

Table 1: Income under the head (in Rs crore)

How do things look if we look at just the salaried class?

It is important to understand here that most individuals belonging to the salaried class would have an income lower than the average income of Rs 5.37 lakh. In order to understand this, we will have to take a look at the data in a little more detail.

The average income of those earning less than Rs 5 lakh is around Rs 2.66 lakh. These individuals form around two-thirds of the overall salaried class filing income tax returns.

How do things look for those earning more than Rs 10 lakh per year?

The average income of those earning more than Rs 10 lakh per year comes to around Rs 21.7 lakh more and is significantly more than the overall average of Rs 5.37 lakh for the salaried class.

A question worth asking here is what sort of a home can individual earning a salary of Rs 3.69 lakh per year, actually afford. An annual income of Rs 3.69 lakh translates into a monthly income of around Rs 30,755.

What sort of a home loan would a bank give against this amount? Typically, a bank works with the assumption that 40% of the monthly income can go towards servicing an EMI and accordingly gives a loan.

In this case that amounts to around Rs 12,300. An EMI of Rs 12,300 at an interest rate of 10% and a tenure of 20 years, would service a home loan of Rs 12.75 lakh. Banks typically lend up to 80% of the official value of the property. This means an official value of property of around Rs 16 lakh (Rs 12.75 lakh divided by 80%). Please take into account the fact that I have used the word official because there is bound to be a black component as well.

What this number tells us is that most salaried class in 2011-2012, were not in a position to buy a home to live in, across large parts of the country. There is no reason to believe that things would have changed since then.

The point is that the demand for real estate is in the below Rs 20 lakh market price segment. But what is being built across large parts of the country is clearly above that price. As RBI governor Raghuram Rajan said in a recent speech: “I am also hopeful that prices adjust in a way that encourage people to buy.”

The column was originally published in the Vivek Kaul’s Diary on May 6, 2016