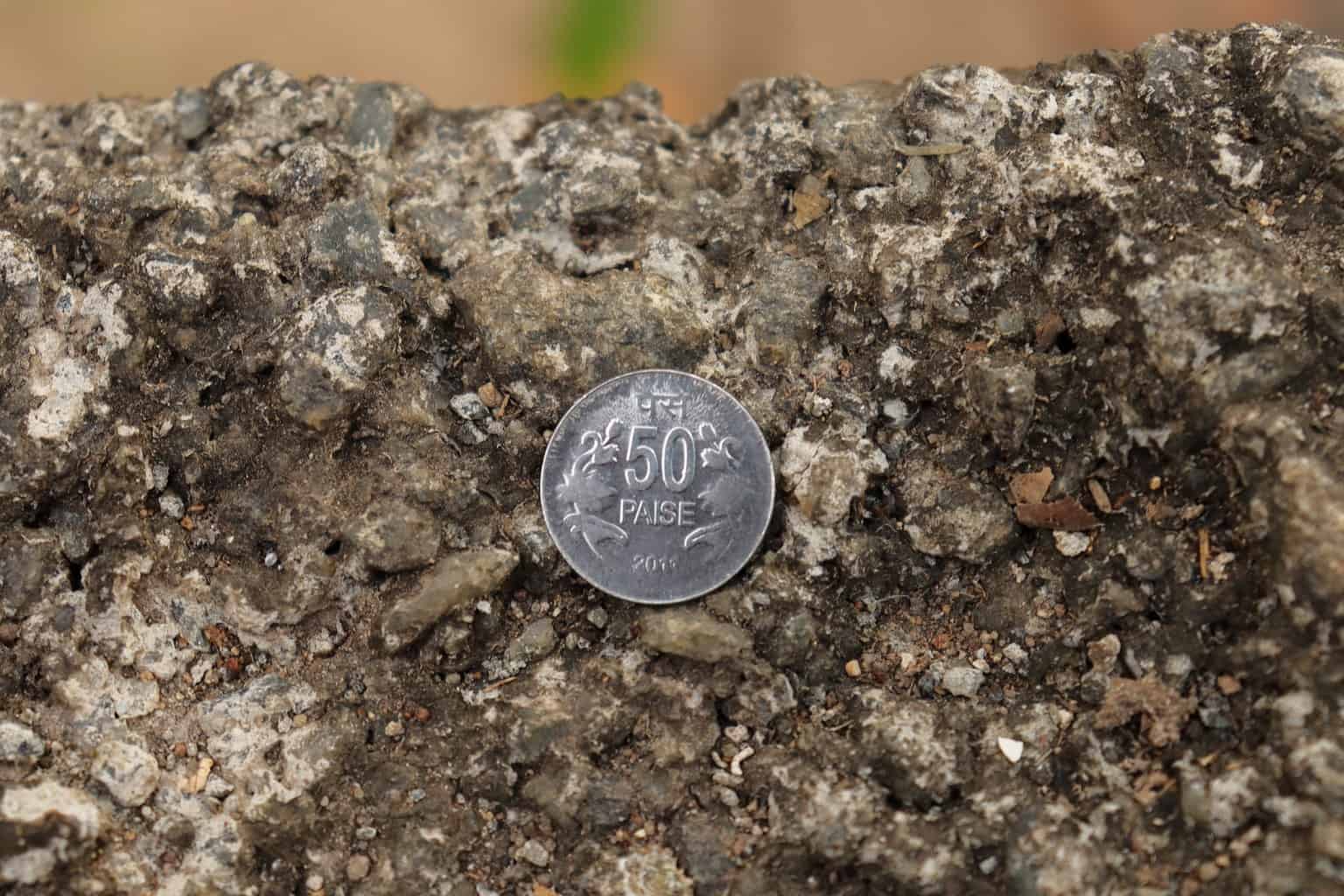 So how did bad loans of public sector banks come down by nearly a fourth? First and foremost, as of March 31, 2018, IDBI Bank, the worst performing bank when it comes to bad loans, was a public sector bank. From January 21, 2019, the bank was categorised to be a private bank. Accordingly, its bad loans moved to the overall bad loans of private banks. But we need to remember IDBI Bank is owned by the Life Insurance Corporation of India, that makes it as close to being a private bank, as Indian Chinese food is close to the real Chinese food.

So, bad loans worth Rs 47,272 crore came down, simply because IDBI Bank got recategorised as a private bank.

Let’s move to the next point. Take a look at the following chart, which basically plots the bad loans of public sector banks over the years. The bad loans of IDBI Bank are included in this chart. 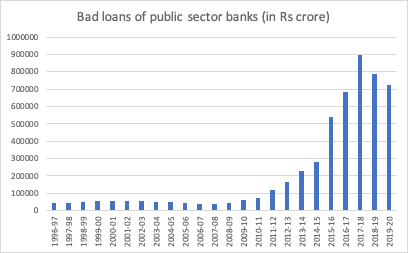 As I elaborate in detail in my book Bad Money, the RBI practiced regulatory forbearance between 2011 and 2014 and did not force public sector banks to recognise their bad loans as bad loans, even though they had started to appear by then. In simple English, regulatory forbearance, essentially means the central bank looking the other way from the problem.

An asset quality review (AQR) was launched in mid 2015 and this forced banks to recognise their bad loans as bad loans. As you can see in the chart, the overall bad loans of public sector banks take a huge jump post 2014-15. This was the AQR at work.

Accordingly, they got written off from the balance sheet of banks. Of course, before such bad loans are written off, a 100 per cent provision needs to be made for these bad loans. This means that banks need to set aside money to meet the losses arising from these loans. This essentially led to the overall bad loans of banks coming down as well.

And over and above this, the banks would have managed to recover a portion of the bad loans (which includes bad loans that have been written off as well). The overall recovery rate for banks through various recovery channels during 2018-19 was around 15.5% of the amounts involved. (Numbers for 2019-20 aren’t currently available or at least I couldn’t find them anywhere).

In fact, a bulk of the current accumulated bad loans will disappear from the balance sheets of public sector banks over the next two to three years, thanks to the fact that bad loans can be written off after they have spent four years on the balance sheet.

Nevertheless, the question is: even after this can the public sector banks operate in a healthy way where they don’t need to be constantly recapitalised. In fact, once public sector banks get around to identifying post-covid bad loans early next year, their balance sheets are likely to come under stress again.

But the basic problem of public sector banks remains interference by the government. This interference can take several forms. As Viral Acharya and Raghuram Rajan write in a research paper titled Indian Banks: A Time to Reform?: “Interference, including appointing favoured candidates to management, expanding lending just before elections, or directing banks to lend to favoured borrowers is obviously harmful.” (Again, something I discuss in great detail in my book Bad Money).

To ensure that public sector banks do not face this kind of interference it has been suggested that they need to be privatised. Over and above this, there have been news reports which suggest that the government is looking to privatise public sector banks.

This remains a difficult decision politically. Also, in an economic environment like the one prevailing, there will be fairly limited number of firms looking to buy government banks saddled with a huge amount of bad loans and a section of employees not used to the idea of working.

Further, unlike other public sector enterprises, the government has to be even more careful while selling a bank. As Acharya and Rajan write:

“The experience in other countries with allowing corporations to own banks is that it increases the possibility of self-dealing within the group – the bank is used to make risky loans to failing group entities, and the bill is paid by the tax payer when the bank is eventually bailed out.”

They further say that the Indian industry is already heavily concentrated. As a recent McKinsey Knowledge Centre report titled India’s turning point An economic agenda to spur growth and jobs points out: “Our analysis shows that just 20 of the country’s roughly 600 large firms contribute 80 percent of the total profit of large firms.” The report defines large firms as firms with an annual revenue of more than $500 million.

If India’s large corporates end up buying its banks, the industry is likely to get even more concentrated. Hence, while privatisation of public sector banks remains a good idea over a long-term, currently, the government can initiate the reform process through the Axis Bank model, wherein the government is an investor in banks rather being a promoter.

The Committee to Review Governance of Boards of Banks in India (better known as the Nayak Committee, after its chairman, PJ Nayak) which presented its report to the RBI in May 2014, suggested the Axis Bank model.

Axis Bank was originally called UTI Bank. It was set up in 1993. It was owned by the Unit Trust of India (UTI) and a clutch of public sector banks. Even though ownership was 100 per cent in the public sector, the bank got a licence to operate as a private sector bank. The bank was listed on the stock exchanges in 1998. UTI Bank was later renamed Axis Bank.

In February 2003, the shareholding of UTI in the bank was transferred to SUUTI. UTI Bank was later renamed Axis Bank.

As the Nayak Committee Report pointed out:

“The Government-as-Investor stance has characterised the control of the Bank, with SUUTI acting as a special purpose vehicle holding the investment on behalf of the Government. The CEO is appointed by the bank’s board, and because the bank was licensed in the private sector, it sets its own employee compensation, ensures its own vigilance enforcement (rather than being under the jurisdiction of the Central Vigilance Commission), and is not subject to the Right to Information Act. SUUTI appoints the non-executive Chairman and up to two directors on the Board, and there is no direct intervention by the Finance Ministry.”

This means that the bank has been run as a proper banking business, without much intervention from the government. Between March 2003 and March 2014, the share price of Axis Bank rose thirty-two times. Over the years, the government has been able to sell its stake in the bank to raise a decent amount of money.

The point being that even though, as per its shareholding, Axis Bank ‘was for many years a public sector bank’, but ‘fortuitously, the bank was licensed at the commencement of its business as a private sector bank’.

The Nayak Committee Report suggests that the government should look at public sector banks as an investment and not as a business it has to run, and follow the Axis Bank model. This essentially means the government reducing the stake in these banks to less than 50 per cent, and letting the bank’s management and its board do their job, like in the case with private sector banks.

But then as the oft-repeated cliche goes, public sector banks are not just about making money. They also need to keep the social objectives of the government in mind. This is something that even Prime Minister Narendra Modi had suggested at the First Gyan Sangam in 2015 (a meeting of bureaucrats, bankers and insurers). As Modi had said on that occasion, while “government interference was inappropriate, but government intervention was needed to further public objectives”.

It’s this line of thought has driven India’s public sector enterprises for seven decades now and gotten them nowhere in the process.

R C Bhargava, the current Chairman of Maruti Suzuki, who was also an IAS officer for a very long time, writes the following in his book Getting Competitive: A Practitioner’s Guide for India:

“The USSR was the pioneer in attempting industrialization along with creating a communist society. It did not succeed. On the other hand, Japan became a highly competitive and industrialized nation and has a high degree of equality and social justice. The policies for regulating and promoting industrial growth do not have any social content in them [emphasis added]. Social equality was a result of the political and industrial leadership understanding that manufacturing competitiveness would be enhanced if there was greater equality and the bulk of the people were enabled to become consumers of manufactured goods.”

This does not mean that the government should do away with meeting its social objectives. Not at all. But what it should do instead is incentivise banks on this front.

As Acharya and Rajan write:

“Perhaps a better approach would be to pay for the mandates (such as reimbursing costs for maintaining branches in remote areas or opening bank accounts for all) so that both private banks and public sector banks compete to deliver on them. This will distance the public sector banks a little from the government. While public sector banks may be given a slightly different set of objectives than private banks (for example, they may put more weight on financial inclusion), their boards should have operational independence on how to achieve the objectives.”

Competition and incentivisation goes a much longer way in delivering services than a government diktat.

The question is, where will the money for all this come from? Allow me to throw a few numbers at you, before I answer this question.

The point I am trying to make here is that if public sector banks end up being much better run than they currently are, the stock market will give them a higher market capitalisation. And the government can then finance its social objectives by gradually selling the shares it owns in these banks.

Of course for anything like that to happen, the Department of Financial Services in the Finance Ministry which controls the public sector banks, needs to take a backseat. As Rajan writes in I Do What I Do: “Unless PSBs are run like normal corporations, they will not be competitive in the medium term. I have a simple metric of progress here: We will have moved significantly towards limiting interference in PSBs when the Department of Financial Services (which oversees public sector financial firms) is finally closed down, and its banking functions taken over by bank boards.”

But as we all know, bureaucrats don’t take backseats.

Oh and politicians. Let’s not forget them here. Back in 2000, the Atal Bihari Vajpayee government tried to push through the move and dilute the government stake in PSBs to 33 per cent. And it failed. Why?

Vajpayee’s finance minister, Yashwant Sinha, had introduced a bill to reduce the government’s stake in PSBs to 33 per cent. It never saw the light of day. In a 2018 interview, Sinha said: “The parliament and the people were not prepared for such [a] kind of step”.

In fact, all these years down the line, we are still grappling with the same issue.

And I sincerely hope, I am proven wrong on this.