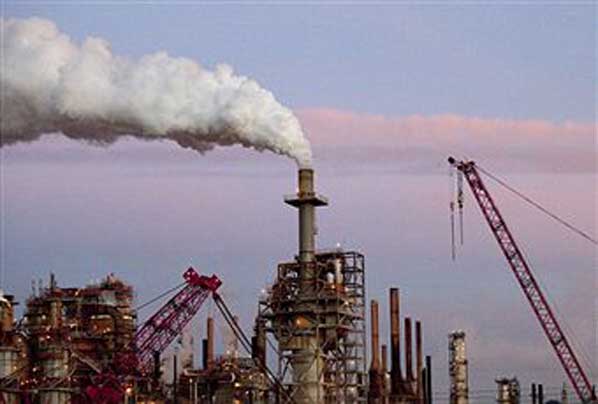 A lot of questions have been raised about the validity of the economic growth number put out by the ministry of statistics and programme implementation earlier this month. The ministry expects the gross domestic product(GDP) growth during this financial year to be at 7.4%. The number was based on a new GDP series. Before this, the Reserve Bank of India(RBI) had forecast a GDP growth of 5.5%.
Until now, no reasonable explanations of this sudden jump in economic growth have been provided. The trouble, as I have mentioned on earlier occasions, is that, the high frequency data that has been coming out doesn’t seem to suggest that the economy has any chance of growing at 7.4%.
In fact, some high frequency data that has come out over the last few days, continues to suggest that it is unlikely that the economic growth during this financial year will be at 7.4%.
Take the case of corporate profit and sales. A recent news report in the Business Standard points out that “aggregate net profit of 2,941 companies” declined by 16.9%. The sales growth also has been the weakest in at least 12 quarters, the report points out. Falling profits and slowing sales clearly show weak consumer demand.
This has also led to the tax collection targets of the government going awry. For the first ten months of the financial year between April 2014 and January 2015, the total amount of indirect tax(service tax, central excise duty, customs duty) collected went up by 7.4%, in comparison to the last financial year.
The budget had assumed a 20.3% jump in indirect tax collections. And that hasn’t happened. In fact only 68.6% of the annual indirect tax target has been collected in the first ten months of the financial year. It seems highly unlikely that the government will be able to meet the indirect tax target that it had set for itself at the time it presented the budget in July 2014.
Things are a little better on the direct taxes front. The growth in direct taxes was expected to be at 15.7% during the course of the year. The actual growth during the first ten months of this financial year has been at 11.4%. Hence, the gap between the expected growth and the actual growth is not as huge as it is in the case of indirect taxes. In fact, Rs 5,78,715 crore or 78.6% of the annual target has been collected during the first ten months of this financial year.
Direct taxes are back ended(i.e. a large part gets paid during the last three months of the financial year). In a report titled Will the Government Meet the Fiscal Deficit Target for F2015? analysts Chetan Ahya and Upasana Chachra of Morgan Stanley point out that “tax collection picks up seasonally toward the end of the fiscal year, with direct tax collection between December and March at 51.4% of total (five-year average).”
Given this, the gap between expected collections and the actual collections will not be huge, by the time this financial year ends. But indirect taxes will continue to be a worry.
There is other high frequency data which clearly suggests that all is not well with the Indian economy. Loans given by banks are one such data point. Latest data released by the Reserve Bank of India(RBI) suggests that bank loans have grown by 10.7% over the last one year (as on January 23, 2015). In comparison, they had grown by 14.4% a year earlier. Interestingly, bank loans have grown by just 6.7% during this financial year.
In fact, things get more interesting if we look at the sectoral deployment of credit data released by the RBI. This data among other things gives a breakdown of the total amount of bank lending that has happened to different sectors of the economy.
The lending to industry has grown by 6.8% during the last one year (as on December 26, 2014). During the same period a year ago, the lending had grown by 14.1%. A slowdown in bank lending is another clear indication that all is not well with Indian businesses as well as the economy.
A major reason for this slowdown in lending is the fact that public sector banks are still facing the problem of bad loans. As Amay Hattangadi and Swanand Kelkar of Morgan Stanley write in their latest Connecting the Dots newsletter titled Putting Serendipity to Work: “State-owned banks that comprise over 75% of the banking system’s outstanding loans are constrained in their ability to lend. Neither has the formation of bad assets ebbed, as is being evidenced in their latest quarterly reports nor have they been able to raise adequate capital to accelerate lending.”
The monthly wholesale price index (WPI) inflation data also points in the same direction. For the month of January 2015, the WPI inflation was at (-)0.39% versus 0.11% in December 2014. Manufactured products which form 64.97% of the index declined by 0.3%. What this tells us is that manufactured products inflation has more or less collapsed. A major reason for the same lies in the fact that people are going slow on buying goods.
Despite falling inflation, people still haven’t come out with their shopping bags.  When consumers are going slow on purchasing goods, it makes no sense for businesses to manufacture them. This also tells us that businesses have lost their pricing power, given that consumers are not shopping as much as the manufacturers can produce.
If all this wasn’t good enough, exports have been growing at a minuscule pace as well. The total exports for the period April 2014 to January 2015 stood at $265.04 billion. Between Apirl 2013 and January 2014 the exports had stood at $258.72 billion. This means a growth of 2.44% in dollar terms, which is nothing great. In fact, during January 2015, exports stood at $23.88 billion down 11.2% in comparison to January 2014.
Car sales, another good indicator of economic activity, also remain subdued. They grew by 3% in January. The  Society of Indian Automobile Manufacturers (SIAM) expects sales growth to be subded during this financial year at 3-5%.
What all this clearly tells us is that 7.4% GDP growth is just a number. It is clearly not happening at the ground level.

The column originally appeared on www.equitymaster.com as a part of The Daily Reckoning, on Feb 19, 2015