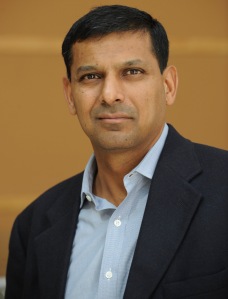 The Federal Reserve Bank of Kansas City is one of the 12 Federal Reserve banks in the United States. Every year in August it organizes a symposium at Jackson Hole in the state of Wyoming. The conference of 2005 was to be the last conference attended by Alan Greenspan, the then Chairman of the Federal Reserve of the United States, the American central bank.
The theme of the symposium was the legacy of the Greenspan era. Those were the days when Greenspan was god, and hence, the economists who had turned up at the conference, were expected to say good things about him and his time as the Chairman of the Federal Reserve of United States, which had lasted close to two decades.
One of the economists attending the conference was Raghuram Rajan, who at that point of time was the Chief Economist of the International Monetary Fund. Rajan presented a paper titled “Has Financial Development Made the World Riskier?” at the conference.
As Neil Irwin writes in The Alchemists—Inside the Secret World of Central Bankers “Raghuram Rajan presented a rare moment of clarity at the 2005 conference. Rajan indeed had an astute understanding of the ways in which the financial industry, with misguided compensation policies that encouraged risk-taking, was making the world a more dangerous place: Bankers were paid big bonuses for making money in the short run even if they were betting poorly in the long run.”

Rajan in his speech also suggested that banks were not in the best shape as was being made out to be. As he put it “The bottom line is that banks are certainly not any less risky than the past despite their better capitalization, and may well be riskier. Moreover, banks now bear only the tip of the iceberg of financial sector risks…the interbank market could freeze up, and one could well have a full-blown financial crisis.”
In the last paragraph of his speech Rajan said that “One source of concern is housing prices that are at elevated levels around the globe.” Rajan’s speech did not go down well with people at the conference. This is not what they wanted to hear.
Rajan recounts the situation in his book Fault Lines – How Hidden Fractures Still Threaten the World Economy: “I exaggerate only a bit when I say I felt like an early Christian who had wandered into a convention of half-starved lions. As I walked away from the podium after being roundly criticized by a number of luminaries (with a few notable exceptions), I felt some unease. It was not caused by the criticism itself…Rather it was because the critics seemed to be ignoring what going on before their eyes.”
Rajan’s prediction turned out to be right in the end and a little over three years later in September 2008, the world was in the midst of a full-blown financial crisis, the impact of which is still being felt, almost six years later. Banks and financial institutions about the go bust had to be rescued by governments all over the Western world. Also, in the aftermath of the crisis, Western governments and their central banks decided to print trillions of dollars in order to get their economies up and running again.
Now Rajan has sounded a warning again.
In an interview to the Central Banking Journal which was published a few days back Rajan said “The problems arising are not so much from credit growth, which is relatively tepid in the industrial markets and has been much stronger in emerging markets, but from asset prices due to financial risk-taking and so on. Unfortunately, a number of macroeconomists have not fully learned the lessons of the great financial crisis. They still do not pay enough attention – en passant – to the financial sector. Financial sector crises are not as predictable. The risks build up until, wham, it hits you. So it is not like economic growth, where unemployment offers a more continuous indicator.”
What Rajan is essentially saying here is that all the money printed and pumped into the financial system by the American and other Western governments has led to financial market bubbles all over the world. And these bubbles when they burst will lead to another financial crisis. As Rajan put it “We are taking a greater chance of having another crash at a time when the world is less capable of bearing the cost.”
Rajan went on to suggest that central banks have had a role to play in creating financial market bubbles all across the world. As he put it “The kind of language we hear is akin to gaming. Investors say, ‘we will stay with the trade because central banks are willing to provide easy money a
nd I can see that easy money continuing into the foreseeable future’. It’s the same old story. They add ‘I will get out before everyone else gets out’.”
In another interview to the Time magazine published on August 11, 2014, Rajan said “A number of years over which we, as central bankers, have convinced markets that we continuously come to their rescue and that we will keep rates really low for long — that we do all kinds of ways of infusing liquidity into the markets — has created markets that tend to push asset prices probably significantly beyond fundamentals, in some cases, and make markets much more vulnerable to adverse news.”
One of the reasons for the bubbles is the fact that compensation structures which encourage high financial risk-taking are back on Wall Street. The following table makes for a very interesting reading. 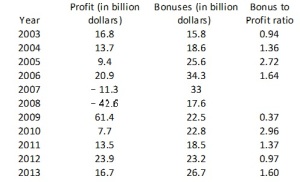 In 2007 and 2008, the Wall Street firms faced huge losses. But their employees still got their bonuses. In fact, in 2007, the total bonus had stood at $33 billion. This, when firms had faced losses of $11.3 billion.
In the year 2009, the Wall Street firms made a profit of $61.4 billion because of all the bailout money given by the government. Even during the heydays of the bull run between 2003 and 2006, the firms had not made that kind of money.
Interestingly, if one looks at the bonus-to-profit ratio between 2003 and 2006, it stands at 1.55. For the period after the financial crisis, between 2010 and 2013, the ratio stands at 1.48. There is not much material difference between the two ratios.
What this clearly tells us is that the bonus paid as a proportion of profits continues to remain high among Wall Street firms. Hence, the “risk” that these high bonuses built into the American financial system continues. As Michael Lewis writes in Flashboys: “Once the very smart people are paid huge sums of money to exploit the flaws in the financial system, they have the spectacularly destructive incentive to screw the system further, or to remain silent as they watch it being screwed by others.”
What Rajan had warned about in 2005 continues unabated and that has led to financial market bubbles all over the world. The real estate bubbles which played a major role in the financial crisis which started in September 2008, are also back with a bang. As Albert Edwards of Societe Generale wrote in a research note titled Here we go again…and once again no-one is listening “We are in the midst of the mother of all housing bubbles.
The economist Nouriel Roubini wrote in a November 2013 column “Now, five years later, signs of frothiness, if not outright bubbles, are reappearing in housing markets in Switzerland, Sweden, Norway, Finland, France, Germany, Canada, Australia, New Zealand, and, back for an encore, the UK (well, London). In emerging markets, bubbles are appearing in Hong Kong, Singapore, China, and Israel, and in major urban centers in Turkey, India, Indonesia, and Brazil.”
Over and above this the stock market in the United States continues to rise. As investment newsletter writer Gary Dorsch puts it in a June 2014 column “The “Least Loved” Bull market is still running on steroids, even at 63-months old. The median lifetime of the Top-12 Bull markets is 55-months. So it’s lasted 8-months beyond its mid-life. A -10% correction hasn’t happened for the past 34-months, far beyond the average of 18-months between corrections.”
And when these bubbles start bursting all over again, as they are bound to do, there will be trouble along the lines Rajan has been talking about. He might have the “last laugh” second time around as well. Though until that happens he may still be the “early Christian who [has] wandered into a convention of half-starved lions”.

The article was originally published on www.Firstbiz.com on August 14, 2014