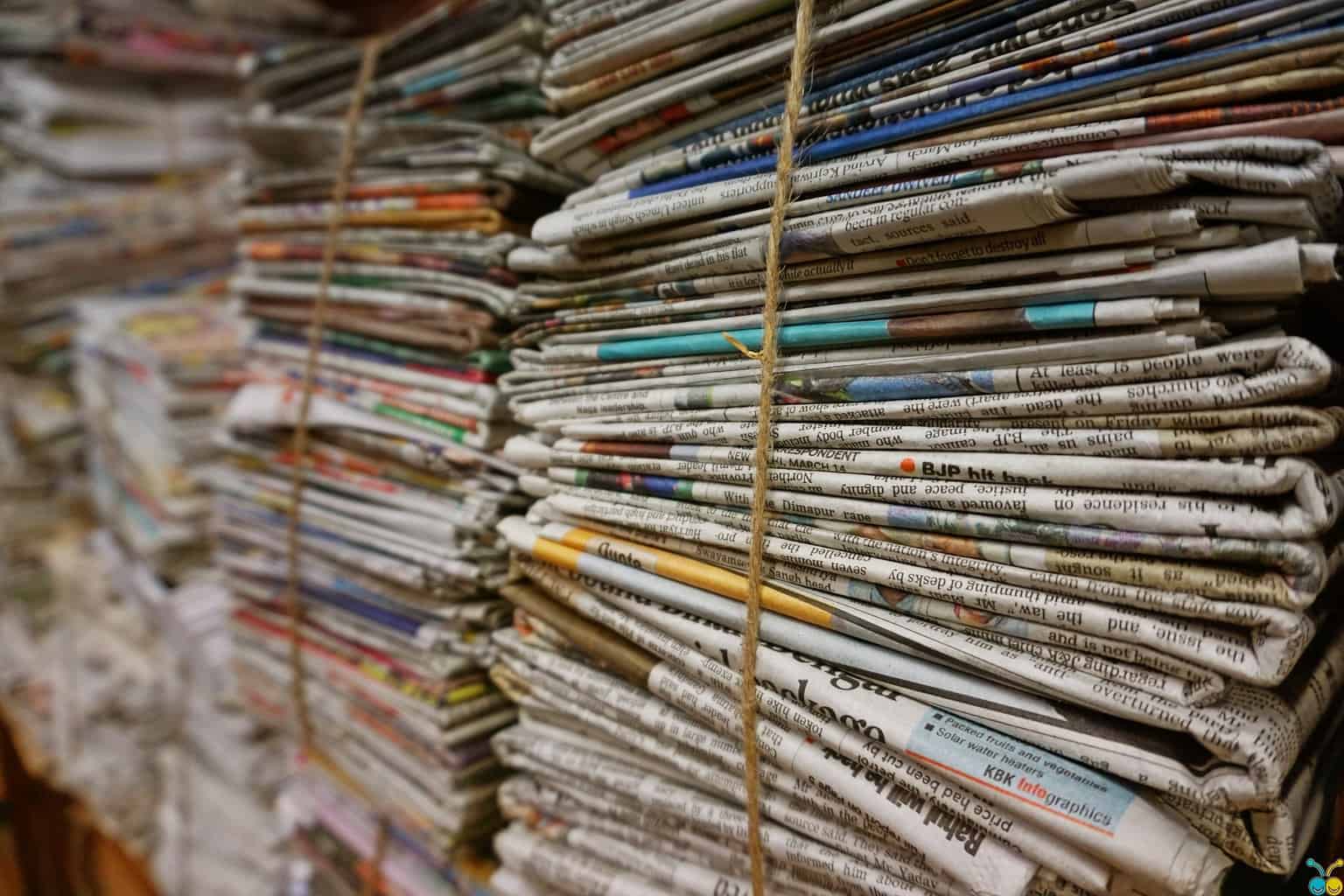 There was a time when I bought and tried to read eight daily newspapers. Two things led to a change on this front. The first reason was very practical. Apartments in Mumbai are small and buying eight newspapers for six days a week (I took a break on Sundays), meant that the raddi accumulated very quickly and took up a lot of space.

The second reason was something I learnt from experience. Most news is just noise. Following noise helps if you are a news reporter because that is precisely your job. But if you are looking to understand the big picture and not miss the wood for the trees, as I was, it made sense to ignore most news that was published and train the mind to look at a few limited things which mattered. (Also, with the internet, one could always Google up the noise later, if the need arose).

This led to a massive cutdown in the newspaper buying habit. Also, around early 2007, I went fully digital, rarely buying physical copies. Hence, I have been reading e-papers now for close to fourteen years. Of course, unlike earlier, I seriously read only two newspapers (on most days) and sort of flip through a third one. And now one of the newspapers which I read seriously, Mumbai Mirror, is shutting down.

This development has made me take a look at the economics of the Indian media, newspapers and digital, in particular. TV news is an entirely different beast, which I do not understand well enough to be writing about. I will also look at the entire issue from the point of view of readers and try to explain why things have become very tricky.
Let’s take a look at the issue pointwise.

1) Indian newspapers, the way they have evolved over the years, have totally become advertisement driven. Depending on who you ask, you are likely to be told that the split between advertisement revenue and subscription revenue, is 80:20 or 90:10, for that matter.

The point being that the readers are not consumers for newspapers, but the product, which is sold to corporates who advertise. Now in a post-corona world, the advertisements in newspapers have come down. Mumbai Mirror used to have an edition of 36 pages on most days before the covid pandemic struck. After covid, the size of the edition barely went beyond 16-18 pages on most days.

Clearly, the newspaper hadn’t been getting enough advertisements, hence, the decision to shut it down. One can also speculate here that the sales of physical copies of newspapers have crashed post the pandemic and are nowhere near what they used to be (I mean newspapers in general here). That’s one reason to possibly explain the lack of advertisements in Mumbai Mirror.
Also, the main reason behind setting up Mumbai Mirror doesn’t exist anymore. The Times Group started the newspaper in 2005, to protect its prime brand, the Mumbai edition of The Times of India, from the Daily News and Analysis (DNA). The Mumbai edition of DNA was launched in July 2005. The other reason behind launching the Mumbai Mirror was to also protect Mumbai edition of The Times of India from The Hindustan Times, which launched a Mumbai edition in July 2005 as well.
DNA was shut down in October 2019, though the newspaper had been down in the dumps for close to a decade before that.

Given this, the Times Group, which looks at its publications not as news ventures but as products which solicit advertising, decided to cut down on its losses.

2) In the last couple of years, many media houses have put their epapers behind the paywall. Some media houses now offer only a certain number of articles per month free, beyond that the reader needs to subscribe (Honestly, there are very simple hacks available to get around this).

While, this might be a sensible thing to do, the chances of it working out quickly are very low. The Western newspapers which have been successful in raising a substantial portion of their revenues digitally, have been at it for almost two decades. Off the record conversations with a few higherups in the newspaper space tell me that digital doesn’t bring in much money currently.

Also, a lot of the digital strategy of the Indian news media is all over the place. Like in the recent past, almost everybody has launched podcasts, without having the most basic infrastructure in place. The recordings of many of these podcasts are absolutely terrible (There are podcasts out there whose production values are superb as well, but that is more an exception which proves the rule). Of course, very few of these podcasts, like most of the digital media, earn any money. They have been launched because everyone else has also done so.

3) One of the theories that has been propounded in the recent past is that the media will survive and report the news that it should, only if the readers pay for the news they consume. Right now most news consumption is free.  Honestly, I have subscribed to this theory as well at some point of time.

But now I am very sceptical of this argument. Let me offer a few reasons for the same. With corporate advertising taking a beating, the news media as a whole is now dependent on government advertising more than ever before. Revenues from the digital media cannot fill the gap because of the fall in corporate advertising.

Hence, the media as a whole needs to keep government(s) in good humour, so that the advertisements keep coming in. Also, other than this economic incentive, the other reason is simple political pressure and the fact that any government has a lot of nuisance value. The current central government thrives on projecting narratives which it wants to and for that it needs the so-called national media on its side. This will stop the media from covering news items like they should.

To cut a long story short, just because you, dear reader, have bought an annual digital subscription which cost Rs 1,000-2,500, it doesn’t mean that the news media will start reporting news the way they should. Propaganda and spin will continue to be the order of the day.

4) Another phenomenon being seen is the rise of paid-newsletters. Some newsletters have achieved some scale and a few thousand paid subscribers. This is often offered as an example of how people are willing to pay for stuff which is written and presented well. While this is a good development, one needs to take into account the fact that the paid-newsletters are extremely niche with a large focus on the private equity, venture capital space, stock market investors etc.

At best they look at business and corporate stories. This doesn’t fulfil the need for the media being the fourth pillar in a democracy. A few thousand people paying for some news they consume isn’t going to help either the Indian media or the Indian democracy in any way, for that matter.

5) Another recent phenomenon has been that of out of work journalists starting their own newsletters and charging for it. While I have no specific idea of how well these newsletters are doing, I can tell you from my own experience that the point about at least 10% of your social media followers will end up paying for the newsletter, is a lot of bunkum. If you can get even 10% of your social media following to click on what you write, you will be doing a decent job of it, forget paying for the content.

6) Also, with newspapers and websites going behind a paywall, WhatsApp forwards and false news, will gain greater legitimacy as people will have easy access to them than genuine news.

7) Where does all this leave news-media houses? A basic point that MBAs who run these organisations haven’t seem to have understood is that today’s reader doesn’t get his news from just one source like the old days, when most families subscribed to one newspaper or at best two newspapers and/or a weekly magazine.

Today’s reader likes to read from multiple sources, basically whatever he finds interesting enough and/or whatever gets shared with him on WhatsApp or social media. Media houses clearly haven’t caught up on this trend. They still want readers to make an upfront payment and commit to a subscription of at least one month.

It’s time that they started adopting micro-payments and pricing their digital stories for as low as five bucks and let people pay for it, if it interests them. Other than offering people choice, this will allow news media houses to tackle the subscription fatigue that will set in sooner rather than later.

It is important to remember here that news media is competing not just with other news media, it is also competing with over the top (OTT) media platforms like Hotstar, Amazon Prime, Netflix, SonLiv etc., for a share of the consumer’s wallet as well as his time and mind-space.

Other than Netflix, which is on the expensive side, the cost of subscribing to other OTTs is quite cheap. The news-media is competing with these OTT platforms as well.

7) Talking about competition, news media houses are now also competing with individual content creators, who have a strong presence on YouTube. Some of these content creators, who focus on delivering free as well as paywalled video content around the important news of the day and cut the clutter, have huge social media followings. Their business model rests around seeking donations from their followers. These donations can be as low as Rs 10. This makes another case for micropayments.

To conclude, common sense suggests that it will be easier to get people to pay for news digitally, if the amounts involved are small. As far as readers are concerned, there are no guarantees that they will get what they are looking for, even if they are ready to pay. One solution is to follow and support individuals like me who are trying to put out stuff they feel people should know about and which the mainstream media isn’t writing about. Nevertheless, the problem there is that there is only so much an individual can do and it is very difficult for individuals to be consistent day and day out.