An internal working group (IWG) of the Reserve Bank of India (RBI) has suggested that large corporate/industrial houses may be allowed to promote banks. Does this huge leap of faith being made by the Indian central bank, given their current extremely cautious and conservative approach, make sense? Let’s try and understand.

Why should large corporates be allowed into banking?

The IWG feels that allowing large corporates to promote banks can be an important source of capital. In a capital starved country like India this makes sense. Further, these corporates can bring “experience, management expertise, and strategic direction to banking”.

The group also noted that internationally “there are very few jurisdictions which explicitly disallow large corporate houses”. All these reasons make sense, but there are major reasons as to why the RBI in the last five decades hasn’t let large corporates enter the banking sector in India. At the heart of all this is the conflict of interest it would create.

Why have large corporates not been allowed into banking?

The IWG spoke to experts on the issue: “All the experts except one [said] that large corporate/industrial houses should not be allowed to promote a bank.”  The corporate governance in Indian companies isn’t up to international standards and “it will be difficult to ring fence the non-financial activities of the promoters.”

What does history have to say in this regard?

As Pai Panandikar, an Advisor in the Finance Ministry, wrote in August 1967, regarding these banks : “Internal procedures… vest large discretionary powers in the Boards of Directors who have often acted as sources of patronage in deciding credit matters.”

What did these large discretionary powers lead to?

In an October 1967 report commissioned by politician Chandrashekhar, then the Secretary of the Congress Party, it was found that of the total bank loans of Rs 2,432 crore in 1966, Rs 292 crores was the debt due from the bank directors and their companies.

In fact, if indirect loans and advances were included, the actual debt-linked to directors was Rs 600-700 crore. There is a danger of something similar happening even now given the weak corporate governance structures. 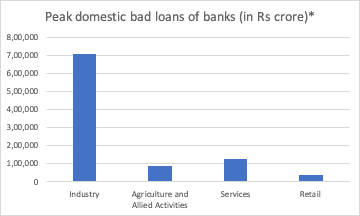 What does this mean in the current scheme of things?

The corporates have been responsible for a bulk of the mess in the Indian banking sector. Given that, handing over banking licenses to them is not a sensible idea, especially when the ability of banks to recover bad loans is limited.