Dr Subramanian Swamy has time and again suggested that personal income tax should be abolished. The logic is that this will put more money in the hands of people, and they will go out there and spend a lot of it, and this will benefit businesses and the overall economy.

What the government will lose out on the direct tax front, it is likely to make up from indirect taxes like goods and services tax, as people consume more. Companies will earn more and as a result pay a higher corporate income tax.

So, clearly there is economic logic to what Dr Swamy has been suggesting over the years. But the fact of the matter is that no government will have the balls to take a decision like this.

Take a look at the following chart. 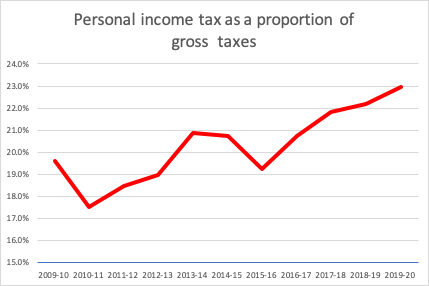 Source: Author calculations on data sourced from www.cga.nic.in and www.indiabudget.nic.in

In 2020-21, the central government hopes to collect a total of Rs 6,25,000 crore as personal income tax. This is around 26% of the total taxes that the government expects to collect in the year.

Of course, this estimate was made before covid-19 struck. Nevertheless, irrespective of that what it tells us is that the government during 2020-21 hoped to collect more personal income tax as a proportion of overall taxes than it has ever done before.

If the government does away with individual income tax as Dr Swamy has suggested over the years and as many income taxpayers have come to wholeheartedly want, it loses nearly a fourth of its tax revenue immediately.

As mentioned earlier in the piece, this will mean a windfall for individual income taxpayers. As they spend a part of this money, the government will earn taxes in other forms. At least that’s what the theory suggests. The government can also sell a lot of assets (its shares in public sector enterprises and land) that it owns to make up for the elimination of personal income tax.

And that’s where the trouble is. No government in its right mind will give up on a fourth of its tax revenues, just in the hope of making up for it through other ways.

Hence, hoping that the government will abolish personal income tax is at best a pipe dream. It’s not going to happen.