As a matter of routine, every afternoon, the power minister Piyush Goyal sends out a tweet titled Afternoon power check. Here are his tweets from the last few days:

What this clearly tells us is that India as a whole has surplus power. Nevertheless, large parts of the country still suffer from power cuts. Just go to news.google.com and say power cuts + India and you will get a spate of news reports on it.

One such news report recently appeared in The Economic Times. It points out that no  Pan-India data on power cuts is available, nevertheless, rural India and small towns experience regular power cuts.

An NGO called Prayas, has been monitoring power cuts in different parts of the country and coming up with a monthly report. As of now the April 2016 report is available. The report collects data from 160 locations (33 Rural and 127 Urban). It essentially looks at three main parameters of the quality of power supply. These are: i) no supply hours, ii) number of interruptions, and, iii) evening hours of supply.

Interestingly, Bihar did much better than Uttar Pradesh and had no power for only 7.5 days during the course of the month. 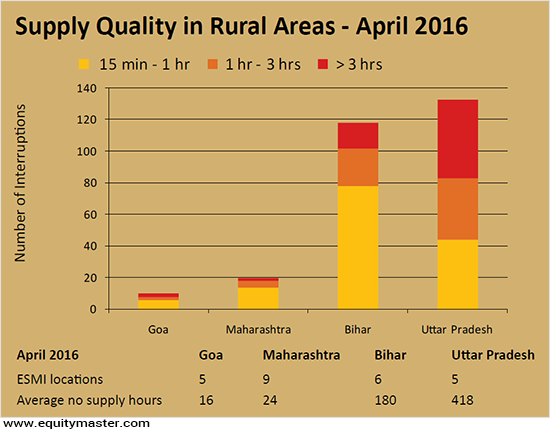 While this data is not definitive, it does tell us that power cuts are still the norm in large parts of India. This despite the fact that the country now has surplus power.

As the Load Generation Balance Report 2016-2017 points out: “The country is likely to experience the energy surplus of 1.1% and peak surplus of 2.6%. Statewise power supply position shows that almost half of the states would be either surplus or balanced.”

In fact, when the report was first published these lines got splashed across the media. The caveats that came after these lines were largely ignored. Let me point them out here: “Surplus energy is anticipated of the order of 3.3% and 6.9% in the Southern and Western Regions respectively. Northern, Eastern and North-Eastern regions are likely to face energy shortage of 1.8%, 10.3% and 8.3% respectively. The peaking shortages are likely to prevail mainly in the Northern, Southern and North-Eastern Regions to the tune of 1.6%, 10.0% and 3.8% respectively.”

In the Eastern region, Bihar and Jharkhand are likely to see a deficit of 18.4 per cent and 7.2 per cent, respectively. The power deficit states need to buy power from the power surplus states, in order to ensure that there are no power cuts.

As Load Generation Balance Report points out: “The remaining states would face both peaking and energy shortages in varying degrees during 2016-17. However, the actual shortage in a state would depend on the extent to which the state is able to get additional power from the surplus states.”

Hence, states that have a power deficit need to buy power from states that have a power surplus, in order to ensure that there are no power cuts. In order to do this, they need to have money. Let’s take the case of Uttar Pradesh. The government run electricity business in Uttar Pradesh suffered losses of Rs 17,678 crore in 2013-2014 (the latest number I could find). Given that, the state has no money to buy surplus power that is available in the country as a whole.

Further, the state had aggregate technical and commercial losses of 24.65 per cent in 2013-2014. This basically means that a major portion of the power that is used is not paid for. This, further means that the state loses money on any extra electricity that it buys and supplies. Hence, if it wants to limit its losses, then it is better off not buying any surplus electricity that is available from other states.

As the power minister Piyush Goyal lamented in June 2016: “We’re selling power for Rs 3.70 per unit to Uttar Pradesh…What can I do if UP does not buy power?” In comparison, the union government used to sell power at Rs 10 per unit earlier, Goyal had said.

What is true about Uttar Pradesh is true for several other states which incur huge losses every year and have huge accumulated losses as well. This explains why even though India has a power surplus, power cuts still continue to be the norm in large parts of the country. Also, this is a mess which will not be easy to sort out. I will continue dealing with this issue in the days to come.

The column originally appeared in Vivek Kaul’s Diary on July 27, 2016