In yesterday’s column I had explained why the gross domestic product (GDP) growth number of 7.4% is more of a statistical quirk. The GDP is essentially the measure of the size of an economy.

The coverage of the GDP news in the media talked about the 7.4% economic growth, without really getting into the details of how that number was arrived at. The GDP growth of 7.4% that everyone from the politicians to the media seem to be talking about is essentially the real GDP growth.

Neither the media nor the economists and the politicians talked about the nominal GDP, which came in at 6%. The nominal GDP is calculated at the current price levels. Once this is adjusted for the prevailing inflation, we arrive at the real GDP.

This as I had explained yesterday is because the GDP deflator is a sort of a combination of inflation as measured by the consumer price index and inflation as measured by the wholesale price index. The wholesale price index has been in negative territory for some time now. And this has led the GDP deflator into negative territory as well. Hence, the deflator instead of deflating the nominal GDP number is inflating it. 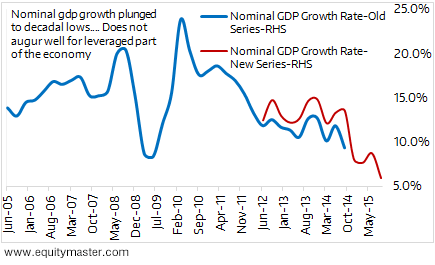 Earlier this year, the ministry of statistics and programme implementation moved to a new way of measuring the gross domestic product. They also produced some backdated data for the last few years. The red curve shows the nominal GDP growth rate as per the new method of calculating the GDP. The blue curve, on the other hand, shows the GDP growth as per the old method of calculating the GDP.

As I had mentioned in yesterday’s column, negative wholesale price inflation has had a huge role to play in inflating the economic growth number. India is seeing a negative wholesale price inflation because of several reasons. Commodity prices have crashed and that is the good bit, because we import a huge amount of important commodities like oil.

On the flip side, negative wholesale price inflation is also a reflection of weak industrial and consumer demand, low capacity utilisation by factories as well as low private investment and falling exports.

What all this tells us is that for economic growth to really recover, the nominal GDP number needs to start to move up. Also, it is worth highlighting here that nominal growth really matters.

Corporate earnings are not adjusted for inflation through the GDP deflator. Neither are wages given by companies both private and government, as well as entrepreneurs. And this has an impact on the psychology of private consumption. The corporate earnings for the period of three months between July and September 2015 grew by less than 1%. In this scenario wage increments will be low.

Let’s say the companies are generous and give around 3% wage increments to their employees in the coming year. The employee will look at it as a 3% increment in wages, which is not huge. He will not look at it as a 7.5% ‘real’ increase in wages (3% nominal wages minus the wholesale price inflation of around – 4.5%). This tendency to look at money in nominal rather than real terms is referred to as the money illusion. Given this, higher wages will not lead to a higher consumption.

Let’s assume that the nominal GDP growth improves during the second half of the year, and the final nominal GDP growth number comes in at 9%. What happens to the fiscal deficit? Assuming the absolute fiscal deficit stays the same, the fiscal deficit as a proportion of the GDP will cross 4%, against the targeted 3.9%. In order to ensure that this does not happen, the government will have to cut down on its expenditure. In an economy where private expenditure and investment is slow that is not the best thing that can happen.

Further, the government wants to reduce the fiscal deficit to 3% of the GDP by 2017-2018. For that to happen, the nominal GDP has to start to go up at a higher rate. It also needs to be pointed out here that the Raghuram Rajan, the governor of the Reserve Bank of India, in the latest monetary policy statement said that he expects the government to continue maintaining the fiscal deficit in the years to come, despite the increased expenditure due to the implantation of the recommendations of the Seventh Pay Commission.

The column was originally published on December 3, 2015 on The Daily Reckoning