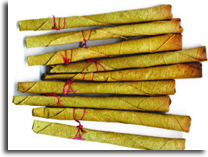 Disclosure: I do not smoke. And I would like to thank PV Subramanyan for explaining several points that I made in this piece.

The article appeared originally on www.equitymaster.com on Nov 27, 2014