A few days back sections of the media reported that Vijay Mallya, a part-time businessman and a full-time defaulter of bank loans, had celebrated his sixtieth birthday by throwing a huge party at the Kingfisher Villa in Candolim, Goa.

This is while banks wait to recover thousands of crore of loans that Mallya has defaulted on, in his quest to own and run an airline.

While Mallya and other industrialists continue to have a good time, the bad loans of banks continue piling up. The Mid-Year Economic Analysis released by the ministry of finance last week points out towards the same. As it points out: “Gross Non Performing Assets (NPAs) of scheduled commercial banks, especially Public Sector Banks (PSBs) have shown an increase during recent years.”

The total bad loans (gross non-performing assets) of scheduled commercial banks increased to 5.14 % of total advances as on September 30, 2015. The number had stood at 4.6% of total advances, as on March 31, 2015. This means a jump of 54 basis points in a period of just six months. One basis point is one hundredth of a percentage.

In fact, we get the real picture if we look at the stressed assets of public sector banks. The stressed asset number is obtained by adding the bad loans and the restructured assets of a bank. A restructured asset is an asset on which the interest rate charged by the bank to the borrower has been lowered. Or the borrower has been given more time to repay the loan i.e. the tenure of the loan has been increased. In both cases the bank has to bear a loss.

The stressed assets of the public sector banks as on September 30, 2015, stood at 14.2% of the total advances. Hence, for every Rs 100 of loans given by public sector banks, Rs 14.2 are currently in dodgy territory. In March 2015, the stressed assets ratio was at 13.15%. This is a significant jump of 105 basis points. In fact, if we look at older data there are other inferences that we can draw.

In March 2011, the number was at 6.6%. In March 2012, the number grew to 8.8%. And now it stands at 14.2%. What does this tell us? It tells us very clearly that banks are increasingly restructuring more and more of their loans and pushing up the stressed asset ratio in the process. And that is not a good thing. The banks are essentially kicking the can down the road in the hope of avoiding to have to recognise bad loans as of now.

This clearly tells us that the balance sheets of public sector banks continue to remain stressed. Data from the Indian Banks’ Association shows that the public sector banks own a total of 77.4% of assets of the total banking system. This means they dominate the system. And if their balance sheets are in a bad shape it is but natural that they will go slow on giving ‘new’ loans. As the latest RBI Annual Report points out: “Private sector banks with lower NPA ratios, posted higher credit growth …At the aggregate level, the NPA ratio and credit growth exhibited a statistically significant negative correlation of 0.8, based on quarterly data since 2010-11.”
As the accompanying chart clearly points out the loan growth of private sector banks which have a lower amount of stressed assets has been much faster than that of public sector banks. 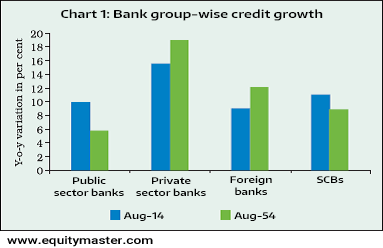 Also, it is worth asking here why are public sector banks continuing to pile up bad loans. The answer might perhaps lie in the fact that the interest paying capacity and the principal repaying capacity of corporates who have taken on these loans continues to remain weak. As the Mid-Year Economic Review points out: “Corporate balance sheets remain highly stressed. According to analysis done by Credit Suisse, for non – financial corporate sector (based on ~ 11000 companies in the CMIE database as of FY2014 and projections done for FY2015 based on a sample of 3700 companies), the number of companies whose interest cover is less than 1 has not declined significantly (this number was 1003 in September 2014 and is 994 in September 2015 quarter).”

Interest coverage ratio is arrived at by dividing the operating profit (earnings before interest and taxes) of a company by the total amount of interest that a company needs to pay on what it has borrowed during a given period. An interest coverage ratio of less than one, as is the case with many companies in the Credit Suisse sample, essentially means that the companies are not making enough money to even be able to pay interest on their borrowings.

Given this, it is not surprising that bad loans of banks continue to pile up, while guys like Mallya continue to have a “good time”.

Postscript: I will be taking a break from writing The Daily Reckoning for the next few days. Will see you again in the new year. Here is wishing you a Merry Christmas and a very Happy New Year.

The column originally appeared on The Daily Reckoning on December 24, 2015

Vijay Mallya is too much of a stiff upper lip to have ever read the Urdu poet Mirza Ghalib. But if he has, he would know, that one of Ghalib’s most famous couplets, fits the current situation that Mallya is in, very well.
Sometime in the nineteenth century Ghalib wrote:

(We have heard about the dismissal of Adam from Heaven,
With more humiliation, I left the street on which you live…

The board of United Spirits Ltd, India’s largest liquor company, has asked Mallya to step down as the Chairman of the company. The liquor baron may have been involved in financial irregularities as per an internal probe carried out by the company.
In a press release dated April 25, 2015, the company said: “The inquiry covered various matters, including certain doubtful receivables, advances and deposits. The inquiry revealed that between 2010 and 2013, funds involved in many of these transactions were diverted from the Company and/or its subsidiaries to certain UB Group companies, including in particular, Kingfisher Airlines Limited…The inquiry also suggests that the manner in which certain transactions were conducted, prima facie, indicates various improprieties and legal violations.”
Mallya in true Indian style has refused to bow out. ““All I wish to say is that I intend to continue as chairman of USL in the normal manner. This includes chairing monthly operating review meetings and board meetings,” he told the Mint newspaper.
Where does this confidence come from? Mallya personally holds 0.01% shares in United Spirits. United Breweries Holdings Ltd (controlled by Mallya) holds 2.90%. Other investment companies controlled by Mallya own around another 1.18%. So Mallya’s holding in United Spirits is down to a little over 4%.
Diageo, the British company to which Mallya sold United Spirits, owns 54.78% of United Spirits. Mallya’s confidence stems from the fact that while selling United Spirits, Mallya and Diageo entered into an agreement, as per which Diageo has to endorse Mallya as the Chairman of United Spirits. This, till Mallya has a stake in United Spirits.
Given this, the stage is set out for a messy legal battle, which will continue for sometime to come. Nevertheless, the question is how did Mallya end up in the mess that he has? One reason was that he took his flamboyant style a little too seriously and ended up starting Kingfisher Airlines in 2005.
Airlines are huge cash guzzlers. As Warren Buffett has said in the past: “The worst sort of business is one that grows rapidly, requires significant capital to engender the growth, and then earns little or no money. Think airlines. Here a durable competitive advantage has proven elusive ever since the days of the Wright Brothers. Indeed, if a farsighted capitalist had been present at Kitty Hawk, he would have done his successors a huge favor by shooting Orville down. The airline industry’s demand for capital ever since that first flight has been insatiable. Investors have poured money into a bottomless pit, attracted by growth when they should have been repelled by it.”
Kingfisher Airlines became Mallya’s bottomless pit. Mallya was in a rush to buy planes. He had plans of buying one Airbus A-320 every month until March 2012. All this needed a lot of money. Mallya loaded up on debt from public sector banks. At the same time, Mallya being Mallya could not have run a low cost airline. In a October 2012 article, Tehalka quotes an aviation sector CEO as saying: “Food served in KFA[Kingfisher Airlines], recalls an aviation sector CEO, was about Rs 700-800 per passenger compared to Rs 300 of Jet’s.”
Other than this Mallya was in a hurry to fly Kingfisher to international destinations. A domestic airline was allowed to do that only once it had completed five years of operation. That meant that Kingfisher would be allowed to fly abroad only by 2010. Mallya did not have the patience to wait for that long. He bought Air Deccan in 2007 to get around the regulation. He ended up overpaying for the low cost airline.
Further, he rebranded Air Deccan as Kingfisher Red. By doing this he diluted the premier positioning that Kingfisher Airlines had acquired in the minds of the consumer. The philosophy required to run a premium brand is totally different in comparison to the philosophy required to run a low cost brand. Hence, Mallya buying Air Deccan was mistake. And then changing its name to Kingfisher Red was an even bigger mistake.
So in the end this did not work and Mallya decided to close down Kingfisher Red. He explained it by saying that “We are doing away with Kingfisher Red, we do not want to compete in the low-cost segment. We cannot continue to fly and make losses, but we have to be judicious to give choice to our customers.”
It is very difficult to run a full-service airline as well as a low cost airline at the same time. The basic philosophy required in running these two kind of careers is completely different from one another. The full service Kingfisher also soon ran into trouble leaving Mallya with a lot of debt. He had got terrible publicity for not paying the salaries of employees of Kingfisher Airlines.
Other than running the liquor and the airline business, Mallya also has interests in real estate. Over and above this, he also indulged in expensive hobbies by buying a formula one and an IPL cricket team. Running an airline is a full time business and can’t be done in a part-time sort of way which Mallya did.
The best Indian companies in the last few decades have made money by concentrating on one line of business. Airtel made money in telecom. It did not make money trying to sell us insurance and mutual funds. The same stands true about DLF. Tata, Birla and Ambani, all lost money in the retail business. Businesses over the years have become more complicated. And just because a promoter has been good at one particular business doesn’t mean it will be good at another totally unrelated business. Mallya did the same with his main liquor business, which he is now losing control of.
Over the last few years, Mallya has been battling the banks which have been going after his assets, for all the debt that is unpaid. To conclude, Mallya has always been too busy living his flamboyant lifestyle and that seems to have caught up with his businesses in the end.

The column originally appeared on www.Firstpost.com on Apr 27, 2015

The column originally appeared on www.equitymaster.com as a part of The Daily Reckoning on Feb 18, 2015