Many media reports have been published around the spat that is currently on between Cyrus Mistry and the Tata Group. Mistry, till he was fired by the board, was the Chairman of the Tata Group of companies.

A report that has made it into the media over and over again, is that of the market capitalisation of the Tata Group of companies, falling by so many thousand crore, after Mistry was fired. Here are the links to a few of these reports.

This table was shared by a senior editor of the Mint newspaper on Twitter. (I have changed it slightly to the extent of rounding off the numbers). The text accompanying the table stated: “#TataSons meltdown Conglomerate loses Rs. 55,000 crore in market cap in 3 days as #CyrusMistry ouster snowballs.”

If we were to look at the situation in percentage terms, then the total market capitalisation of the Tata companies fell by 6.5 per cent, over the three-day period. While, this is huge, it doesn’t sound as big as saying that the market capitalisation has fallen by Rs. 55,000 crore. This is what the media has been doing.

How does the situation look once we adjust for this anomaly? Suddenly the total fall in market capitalisation is down to around Rs. 23,000 crore (or Rs. 22,747crore to be precise). In percentage terms this fall is around 3.4 per cent.

Now the situation doesn’t look as bad as it did earlier. Or to put it in other terms, if Tata Motors, is taken out of the equation, the media headlines are no longer as sexy (for the lack of a better term) as they originally sounded.

The point being that one Tata group stock i.e., Tata Motors has had to bear the brunt of the spat between the Tata Group and Cyrus Mistry. In fact, between October 24, 2016 and October 27, 2016, the price of the stock fell by 17.8 per cent.

The investors in these cases perhaps did not like these stocks anyway, and were looking for an excuse to sell out of them. The Tata Group and Cyrus Mistry spat, just provided them an excuse for it.

The major point here is that we all like to look at absolute numbers. But that doesn’t really mean anything unless we take percentages into account. This is because a rise or a fall is essentially meaningless without taking the previous price or market capitalisation into account.

This is a tendency to concentrate on absolute numbers is visible in real estate investing as well. People tend to fondly remember anecdotal stories about friends, relatives, neighbours and others, who bought a flat for Rs. 10 lakh and sold it for Rs. 60 lakh. They do not factor in the expenses over the years or the time value of money.

And that is one of the reasons that has kept the real estate bubble going.

The column originally appeared in Vivek Kaul’s Diary on November 1, 2016 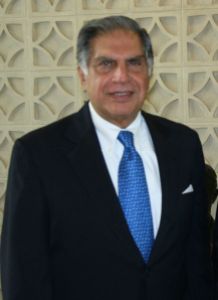 (The article originally appeared on www.firstpost.com on August 31,2012. http://www.firstpost.com/business/ta-ta-how-ratan-rebuilt-the-house-that-jrd-left-him-437593.html)