But like most stock market wisdom, this is easy to mouth, but difficult to implement in real life. It is very difficult to buy when others are selling and vice versa.

The tendency is to go with the herd because there is safety in numbers. And if things don’t work out as intended, one has someone else to blame as well. “I only did what Mr Singh’s son recommended,” goes the argument.

Take a look the following chart. That is how the Sensex has looked between April 1, 2011 and March 31, 2016. As can be seen from the chart, the overall trend of the Sensex has been in the upward direction, though it did fall during the course of 2015-2016. 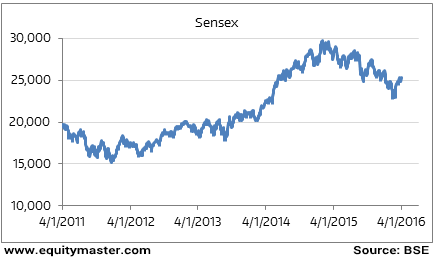 Now take a look at the following table.

Source: Annual Report of the Reserve Bank of India

The table shows the portion of gross national disposable income (basically the GDP number adjusted for a few other things. For a detailed treatment click here) made up for by investments in shares and debentures, which are a part of the household financial savings. In 2011-2012, shares and debentures made up for 0.2 per cent of the gross national disposable income. By 2015-2016, this had jumped up to 0.7 per cent. The household financial savings comprise of currency, deposits, shares and debentures, insurance funds, pension and provident funds and something referred to as claims on government. The claims on government largely reflects of investments made in post office small savings schemes.

What the table clearly tells us very clearly is that a very small portion of Indian retail investors invests in shares and debentures. In fact, these numbers also include the mutual fund numbers.

What do we learn from the chart and the table? As the Sensex went up, so did the investments in shares and debentures.

The trouble is that for some reason, which actually makes no sense, the RBI puts out the data for shares and debentures together. A breakdown of the total amount of money held in the form of shares (or debentures for that matter) is not available. But with the help of some other data we can prove that the Indian investor basically follows the policy of buying once the stock markets have rallied.

And this new money kept coming in as the Sensex kept going up. Take the case of what happened between March 31, 2015 and March 31, 2016. The Sensex fell by 9.3 per cent during the course of the year. The assets under management of equity mutual funds on the other hand, went up by 12.8 per cent.

This is a clear indication of the fact that investors actually invest in equity mutual funds only after the markets have rallied. Once the market has rallied, the investors probably assume that it will continue to rally.

Hence, I guess, it is safe to say that a similar behaviour is on when it comes to direct investing in stocks as well. And that (along with increase in mutual fund investments) explains why the share of shares and debentures has increased from 0.2 per cent of gross national disposable income in 2011-2012 to 0.7 per cent in 2015-2016.

Of course, one would be able to say this with much greater confidence if the RBI gave an exact breakdown of shares and debentures. I hope that this anomaly is corrected in the days to come.

The column originally appeared in The Five Minute Wrapup on September 7, 2016