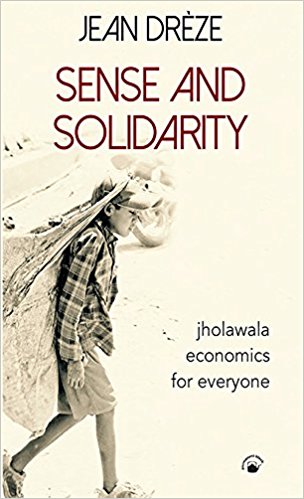 Jean Drèze, unlike other economists, has “lived experience” of India. This is clearly missing among most economists who practice economics (for the lack of a better phrase) sitting in their air-conditioned rooms, working in big cities like Mumbai and New Delhi, and just looking at data.

While looking at numbers is important, nevertheless, as Drèze writes in the introduction to his new book Sense and Solidarity—Jholawala Economics for Everyone, in the context of widows who get government pension: “What is no less useful is to spend some time with widows and the elderly and ask them about their lives. If you have a heart, their pain and helplessness will move you like no statistical evidence is likely to.”

And Drèze’s book does move at many levels. Even if you consider him to be a jholawala, you really cannot contest much of Drèze writes in this book, which is essentially a collection of columns which he has written over the years. Drèze defines a jholawala as a disparaging reference used by the corporate sponsored media for activists.

Take the case of godowns of Food Corporation of India hoarding food grains which are rotting, while the market price of rice and wheat has been going up. This scenario played out repeatedly up until a few years back.

As Drèze writes: “The food subsidy is essentially a deficit of the Food Corporation of India (FCI), whose operations are now chiefly geared to keeping food prices up rather than down. This has been achieved, temporarily at least, by accumulating massive amounts of food in FCI godowns.”

Drèze further says that the poor benefit very little from the price support measures of the government. The government buys rice and wheat directly from the farmers at a minimum support price. This tends to help the bigger farmers especially in the bigger states like Punjab and Haryana. It also leads to a lot of rice being grown in a semi-arid like Punjab. Also, it ensures that farmers like to produce rice and wheat and not diversify into other crops.

This is something that most non-jholawala economists would agree with as well.
Or take the case of the humungous bureaucracy that holds back India’s administrative system. Drèze gives the example of the sub-divisional magistrate of Latehar district in Jharkhand.

He talks about a scenario where the pension applications were being forwarded to the state government at a snail’s pace, simply because the sub-divisional magistrate had to sign each application six times. There were 13,000 applications pending, which meant 78,000 signatures were required from the magistrate.

Not surprisingly, it is such rules and regulations that lead to rent-seeking behaviour and increase the distance between good governance and the citizens of this country.
Drèze also goes into detail about the health care system in India. This is by far the best part of the book. Even though India’s growth rate has grown from strength to strength over the last quarter century since economic reforms were initiated, the country continues to lag on the health front.

When it comes to child mortality rates, India lags even countries like Bangladesh and Nepal, which have a much lower GDP per capita than that of India. As Drèze writes: “For instance, despite being about twice as rich as Bangladesh in terms of per capita GDP, India lags far behind Bangladesh in terms of child vaccination rates, breastfeeding practices, the incidence of open defecation, access to safe water, and related indicators. The same point applies if we compare India with Nepal, which is even poorer than Bangladesh.”

This is a big puzzle. Why does the country give such low priority to health? The public expenditure on stands at 3 per cent of GDP for low-and-middle-countries. In India, it is significantly less than that. What explains this?

The answer to this perhaps lies in the section in the book dealing with food security. Here Drèze offers the example of Tamil Nadu and Chhattisgarh and the success of the public distribution system, which sells food grains at a very low price to citizens in both the states. In case of Chhattisgarh it was a political calculation that worked very well for the Raman Singh led BJP. But the political calculation came with political will which ensured that people of the state got their fair share of rice and wheat at the price mandated by the government. And this led to a vocal demand for a functional PDS from the people.
As Drèze writes: “Vocal demand is very important for the success of PDS. This is one reason why the PDS works much better in Tamil Nadu than elsewhere; everyone has a stake in it. Chhattisgarh’s recent success builds on the same principle.”

The moral of the story is that once people get a taste of good governance, they are more likely to demand it than not. This is something that can be applied in case of India’s poor record on the health front. Only once there is political will to improve India’s standing on the health front, will things start changing at the ground level.

Also, it is time that the government spent more on the health front. Of course, the government doesn’t have an endless amount of money. Hence, it must allocate what it earns, properly, which it has not been doing.

Drèze talks about a huge amount of money being spent every year as fertilizer subsidy, with doubtful social benefits, and environmental damage. And above all this, it basically benefits rich farmers, who are a strong political lobby.

There are other reasons as well, including a big public sector. A big public sector was at the heart of the Nehruvian model of development. By the time late seventies and early eighties, a central government company was present in almost every sector. From condoms to colas, the government made it at all. Of course, the capital that went to the setting up of these companies could have easily gone towards more important areas like health and primary education. But it did not.

Not surprisingly, many of these companies ended up making huge losses. The government continues to subsidise the losses of many of these companies. One of the biggest of them is Air India. The company has made losses of Rs 35,891 crore, between 2010-2011 and 2015-2016. Another such company is Hindustan Photo Films Manufacturing Company. Between 2004-2005 and 2015-2016, the company has made total losses of Rs 14,960 crore.

Just between 2011-2012 and 2015-2016, the loss making public sector enterprises have lost close to Rs 1,40,000 crore. Now that is a lot of money. This does not include the loss making public sector enterprises run by the state governments across the country and the losses that they make. It also does not include the bad loans of the public-sector banks which are written off and the government has to infuse fresh capital into these banks. A lot of money is required to keep the unviable parts of the government going.
And at the cost of repetition, every rupee that funds these companies, essentially gets taken away from healthcare and other important areas like education.

To conclude, Drèze writes lucidly with a lot of passion on issues that really impact India. These are not issues that you will see corporate economists and analysts talk about, given that they are perpetually busy in selling the India growth story still going strong.
Of course, one may not agree with everything that Drèze has written. His views on Aadhar may not go down well with the supporters of the current government. Also, his views on cash-transfer may not go down well with many economists and analysts (including the reviewer) who look at it as a way of tackling huge corruption that prevails in India.

Nevertheless, most of the issues that Drèze writes and analyses, are the real issues that are holding back India and they need to be tackled sooner rather than later on a war footing.

The column originally appeared in Equitymaster on December 20, 2017.