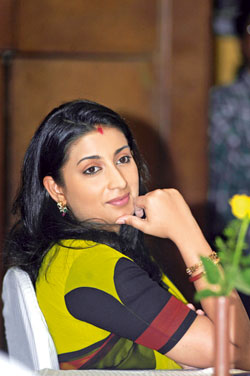 So Smriti Irani cannot make for a good human resources development minister because she is not a graduate.
Or so we have been told by the likes of Madhu Kishwar and Ajay Maken.
In short, people who have degrees make for better politicians is the conclusion being drawn. But is that really the case?
Let’s take the case of a certain Lalu Prasad Yadav, who was the defacto Chief Minister of Bihar for more than 15 years. Lalu has a Bachelor of Laws and a Master in Political Science. How did his degrees make any difference?
During his rule Bihar went from bad to worse. In fact, when Lalu was questioned about the lack of development in the state, he was very open about admitting that development did not lead to votes.
Such was Lalu’s lack of belief in development that even money allocated to the state government by the Central government remained unspent. As Santhosh Mathew and Mick Moore write in a research paper titled State Incapacity by Design: Understanding the Bihar Story, “Despite the poverty of the state, the governments led by Lalu Prasad signally failed to spend the money actually available to them: ‘…Bihar has the country’s lowest utilisation rate for centrally funded programs, and it is estimated that the state forfeited one-fifth of central plan assistance during 1997–2000.’”
Interestingly, between 1997 and 2005, Rs 9,600 crore was allocated by the Ministry of Rural Development to Bihar. Around Rs 2,200 crore was not drawn. Of the amount that was drawn only 64% was spent.
During Lalu’s rule Bihar went from bad to worse and a whole generation lost out on progress. But yes, Lalu had two degrees.
Let’s take an even better example of former prime minister Dr Manmohan Singh, a PhD from the University of Oxford. Now compare his degree to the mess that we have ended up with under him. Interestingly, most of our politicians who have a degree, tend to have a degree in law. How does that help in anything other than running the law ministry or the ministry of corporate affairs or other similar ministries? And that is assuming that having studied law, the politician understands its intricacies (not every lawyer has the same command on the subject like Arun Jaitley does).
If we take this argument further, what it means is that to become a minister an individual should be an expert in that particular area. So, a finance minister should either be an economist or a finance professional. Arun Jaitley is neither. A defence minister should have experience in the area of defence. So, doesn’t that make General V K Singh an excellent choice for being the defence minister?
Further, in order to get an individual with the right experience or a degree to head a ministry, one would be looking at technocrats all the time. So, then why bother about electing MPs at all?
This would mean moving onto a more American form of government where the President is elected by the people and is allowed to choose his team, a lot of whom are technocrats who have the required experience.
Given this, insisting that a minister have a degree, doesn’t make much sense in the present system of government that we have.
That’s the general part of the argument. Then there is also the specific part regarding Smriti Irani and Congress’ criticism of her lack of a degree. To her credit Irani is a successful professional, who has risen on her own, in a very competitive television industry.
Also, what one needs as a minister is the ability to administer. Whether she has that or not, we will come to know in the time to come.
The Congress party is in no position to criticize her. One of their foremost leaders Rajiv Gandhi, never completed any degree after leaving the Doon School. He was the prime minister of the country. His mother Indira, never completed her degree at Oxford. Their current leader Sonia Gandhi’s educational qualifications are also nothing to write home about. So, they really are not in a position to criticise Irani. It’s like the pot calling the kettle black.
To make a totally different comparison, all the Ivy League MBAs, PhDs in Maths and Physics who worked on the Wall Street, created a major part of the financial crises that the world is currently going through.
To conclude, there is not much of a link between having a degree and having the ability to govern. Look at the mess Kapil Sibal, who held the human resources development ministry between May 2009 and October 2012, made in the education sector. He had got his LLM degree from the Harvard Law School.

The article originally appeared on www.firstpost.com on May 28, 2014