The Reserve Bank of India (RBI) publishes the Financial Stability Report (FSR) twice a year, in June and in December. This year the report wasn’t published in December but only yesterday (January 11, 2021).

Media reports suggest that the report was delayed because the government wanted to consult the RBI on the stance of the report. For a government so obsessed with controlling the narrative this doesn’t sound surprising at all.

Let’s take a look at the important points that the FSR makes on the bad loans of banks and what does that really mean. Bad loans are largely loans which haven’t been repaid for a period of 90 days or more.

3) In the past, the RBI has done a very bad job of predicting the bad loans rate under the baseline scenario, when the bad loans of the banking system were going up. 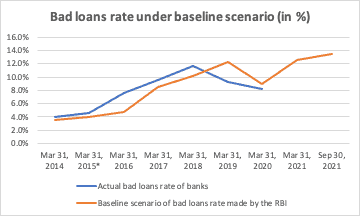 Source: Financial Stability Reports of the RBI.
*The actual forecast of the baseline scenario was between 4-4.1%

If we look at the above chart, between March 2014 and March 2018, the actual bad loans rate turned out to be much higher than the one predicted by the RBI under the baseline scenario. This was an era when the bad loans of the banking system were going up year on year and the RBI constantly underestimated them.

4) How has the actual bad loans rate turned out in comparison to the bad loans under severe stress scenario predicted by the RBI? 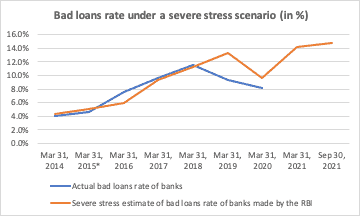 Source: Financial Stability Reports of the RBI.
*The actual forecast of the baseline scenario was between 4-4.1%

In four out of the five cases between March 31, 2014 and March 31, 2018, the actual bad loans rate turned out higher than the one predicted by the RBI under a severe stress scenario. As Arvind Subramanian, the former chief economic advisor to the ministry of finance, writes in Of Counsel:

“In March 2015, the RBI was forecasting that even under a “severe stress” scenario— where to put it colourfully, all hell breaks loose, with growth collapsing and interest rates shooting up—NPAs [bad loans] would at most reach about Rs 4.5 lakh crore.”

One possible reason can be offered in the RBI’s defence. Let’s assume that the central bank in March 2015 had some inkling of the bad loans of banks ending up at around Rs 10 lakh crore. Would it have made sense for it, as the country’s banking regulator, to put out such a huge number? Putting out numbers like that could have spooked the banking system in the country. It could even have possibly led to bank runs, something that the RBI wouldn’t want.

In this scenario, it perhaps made sense for the regulator to gradually up the bad loans rate prediction as the situation worsened, than predict it in just one go. Of course, I have no insider information on this and am offering this logic just to give the country’s banking regulator the benefit of doubt.

5) So, if the past is anything to go by, the actual bad loans of banks when they are going up, turn out to be much more than that forecast by the RBI even under a severe stress scenario. Hence, it is safe to say that by September 2021, the bad loans of banks will be close to 15% of advances, a little more than actually estimated under a severe stress scenario.

This will be double from 7.5% as of September 2020. Let’s try and quantify this number for the simple reason that a 15% figure doesn’t tell us about the gravity of the problem. The total advances of Indian banks as of March 2020 had stood at around Rs 109.2 lakh crore.

6) The question is if this is the level of pain that lies up ahead for the banking system, why hasn’t it started to show as yet in the balance sheet of banks. As of March 2021, the RBI expects the bad loans of banks to touch 12.5% under a baseline scenario and 14.2% under a severe stress scenario. But this stress is yet to show up in the banking system.

This is primarily because the bad loans of banks are currently frozen as of August 31, 2020. The Supreme Court, in an interim order dated September 3, 2020, had directed the banks that loan accounts which hadn’t been declared as a bad loan as of August 31, shall not be declared as one, until further orders.

As the FSR points out:

“In view of the regulatory forbearances such as the moratorium, the standstill on asset classification and restructuring allowed in the context of the COVID-19 pandemic, the data on fresh loan impairments reported by banks may not be reflective of the true underlying state of banks’ portfolios.”

The Supreme Court clearly needs to hurry up on this and not keep this hanging.

7) Delayed recognition of bad loans is a problem that the country has been dealing with over the last decade. The bad loans which banks accumulated due to the frenzied lending between 2004 and 2011, were not recognised as bad loans quickly enough and the recognition started only in mid 2015, when the RBI launched an asset quality review.

This led to a slowdown in lending in particular by public sector banks and negatively impacted the economy. Hence, it is important that the problem be handled quickly this time around to limit the negative impact on the economy.

8) Public sector banks are again at the heart of the problem. Under the severe stress scenario their bad loans are expected to touch 17.6% of their advances. The sooner these bad loans are recognised as bad loans, accompanied with an adequate recapitalisation of these banks and adequate loan recovery efforts, the better it will be for an Indian economy.

9) At an individual level, it makes sense to have accounts in three to four banks to diversify savings, so that even if there is trouble at one bank, a bulk of the savings remain accessible. Of course, at the risk of repetition, please stay away from banks with a bad loans rate of 10% or more.

To conclude, from the looks of it, the process of kicking the bad loans can down the road seems to have started. There is already a lot of talk about the definition of bad loans being changed and loans which have been in default for 120 days or more, being categorised as bad loans, against the current 90 days.

The Reserve Bank of India(RBI) released the Financial Stability Report on December 23, 2015. One of the key themes in this report was the fact that large borrowers are the ones who have landed the banking sector in trouble. As the RBI governor Raghuram Rajan wrote in the foreword to the report: “corporate sector vulnerabilities and the impact of their weak balance sheets on the financial system need closer monitoring.”

That is a euphemistic way of saying that corporates are essentially responsible for the rising bad loans of banks. As on September 30, 2015, the bad loans (gross non-performing advances) of banks were at 5.1% of total advances [i.e. loans] of scheduled commercial banks operating in India. The number was at 4.6% as on March 31, 2015. This is a huge jump of 50 basis points in a period of just six months. One basis point is one hundredth of a percentage.

What these numbers clearly tell us is that in a period of six months the situation has deteriorated big time and large borrowers have been responsible for it. As the RBI Financial Stability Report points out: “While adverse economic conditions and other factors related to certain specific sectors played a key role in asset quality deterioration, one of the possible inferences from the observations in this context could be that banks extended disproportionately high levels of credit to corporate entities / promoters who had much less ‘skin in the game’ during the boom period.”

What does this mean? Banks gave loans to corporates/promoters who had put very little of their own money in the project they had borrowed money for. Banks essentially gave more loans than they actually should have, given the amount of capital the promoters put in. And this is now proving to be costly for them.

In fact, lending to industry forms a major part of the stressed loans of banks. Stressed loans are essentially obtained by adding the bad loans and the restructured loans of banks.  A restructured loan is a loan on which the interest rate charged by the bank to the borrower has been lowered. Or the borrower has been given more time to repay the loan i.e. the tenure of the loan has been increased. In both cases the bank has to bear a loss.

Lending to the retail sector (i.e. you and me) continues to be the best form of lending for banks. The stressed loans ratio in this case is only 2%. This means that for every Rs 100 lent by banks to the retail sector (home loans, car loans, personal loans and so on), only Rs 2 is stressed.

Why is this the case? For the simple reason that it is very easy for banks to go after retail borrowers who are no longer in a position to repay the loans they have taken on. Further, there is no political meddling when it comes to loans to retail borrowers, hence, the lending is anyway of good quality.

In comparison, lending to industry has a stressed loans ratio of 19.5%. This means for every Rs 100 that the banks have lent to industry, Rs 19.5 is stressed i.e. it has either been defaulted on or has been restructured. Interestingly, even within industry, the situation with the micro industries is not as bad as the medium and the large industries.

The large industries have a stressed loans ratio of 21% i.e. for every Rs 100 lent to large industries by banks, Rs 21 has either been defaulted on or has been restructured. In case of micro industries, the number is at 8%. This is because banks can unleash their lawyers on the small industries in case the loan is in trouble. They can’t do the same on large borrowers. And even if they do it does not have the same impact.

To conclude, when it comes to the bad loans of banking, the big boys are the bad boys who are responsible for a majority of the mess.

The column originally appeared on The Daily Reckoning on January 5, 2016