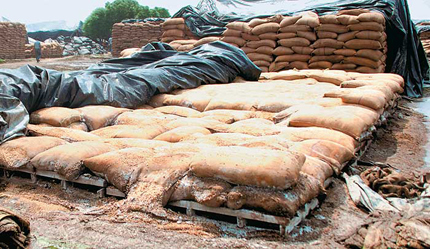 In the column dated July 21, 2016, I had said that the Food Security Act does not really provide “food security” to the citizens of this country. And given that nearly three years have passed after the passage of the Act, it is time that the government took a relook at the functioning of this Act.

In case you haven’t read the piece that appeared on July 21, 2016, I suggest you do that, before getting around to reading this one.

Other than the fact that the Food Security Act does not provide food security, there is also a lot of wastage of rice and wheat that are distributed to the citizens of this country under the Act.

The food grains are distributed using the network of around 5,00,000 fair price shops located all over the country. The trouble is that this network is extremely leaky. Economists Ashok Gulati and Shweta Saini calculate this leakage in a research paper titled Leakages from the Public Distribution System and the Way Forward.

In this research paper Gulati and Saini calculate the total amount leakage through the public distribution system. The union government supplies rice and wheat to states and union territories in order to meet the grain distribution commitments under the Food Security Act. Over and above the normal allocations, ad-hoc allocations are also made.

Further, the state wise monthly per capita consumption of rice and wheat is also available. This is used to calculate the consumption numbers of rice and wheat for every state. As Gulati and Saini point out: “The grains off-taken by each state gives the total grain supply in the year and the consumption figures give how much is received by the targeted consumer. The excess of what is supplied over what is consumed should reflect the extent of leakage of grain from the system. Our calculations show that in 2011-12, 25.9 MMTs or 46.7 per cent of the off-taken grain leaked from the public distribution system.” Hence, a little less than half of the grains distributed through the public distribution system do not reach those who they are meant for.

As the Report of the High Level Committee on Reinventing the Role and Restructuring of Food Corporation of India (better known as the Shanta Kumar committee report) points out: “Leakages don’t happen in a vacuum. There is connivance at several levels, breeding corruption. It is now time to think out of the box and find some alternative policy solutions that can plug such large scale leakages and associated corruption, and that can ensure that benefits reach directly to the neediest.”

And how can this be done? The answer lies in giving cash directly to the beneficiaries of the Food Security Act. There is this great belief among the well-off that giving money directly to the poor will mean that the men will simply drink it away. This argument only sounds true because it plays on a stereotype of the poor being poor because they waste their time drinking.

Nevertheless, as economist Joseph Halon points out: “Poverty is fundamentally about a lack of cash. It’s not about stupidity.” (Source: Rutger Bergman’s Utopia for Realists). Hence, if poor do get money under an unconditional cash transfer scheme, they don’t waste it on alcohol and tobacco. In fact, there is enough research from all over the world that proves that.

As Rutger Bergman writes in Utopia for Realists: “The great thing about money is that people can use it to buy things they need instead of things that self-appointed experts think they need. And, as it happens, there is one category of product which poor people do not spend their free money on, and that’s alcohol and tobacco. In fact, a major study by the World Bank demonstrated that 82% of all researched cases in Africa, Latin America, and Asia, alcohol and tobacco consumption actually declined.”

In fact, such an experiment has happened in Delhi as well, and the results were along similar lines. As Gulati and Saini point out: “It is worth noting that a study by the Government of Delhi and SEWA, under the GNCTD-UNDP project, tested the effects of substituting PDS rations by cash transfers for BPL families in a west Delhi region in the year 2011. It found that the consumption of the studied food items did not fall, and interestingly, the consumption of items like pulses, eggs, fish and meat went up. Contrary to expectations, the alcohol consumption did not increase; rather, the efficiency of PDS shops surely increased!”

The Food Security Act just distributes rice and wheat at subsidised prices. A nutritious meal is about consuming other food items as well. By giving cash directly to families, families can decide what is best for them. In fact, by moving to cash transfers, the country can save close to Rs 33,087 crore, Gulati and Saini calculate, and that is clearly a lot of money. This money can be better utilised elsewhere.

Given this, the Shanta Kumar committee has recommended that cash transfers should be introduced by starting with the “large cities with more than 1 million population; extending it to grain surplus States, and then giving option to deficit States to opt for cash or physical grain distribution.” The Committee has also said that the “cash transfers can be indexed with inflation” and “given to the female head of the family”.

The trouble is that the infrastructure that allows the government to do this (Jan Dhan bank accounts seeded with Aadhar numbers) is not yet ready. The sooner this gets ready, the better it will be for the nation as a whole.

The column originally appeared in Vivek Kaul’s Diary on July 28, 2016

In his book Naked Economics—Undressing the Dismal Science, the American author Charles Wheelan recounts a very interesting story about his visit to Cuba. Cuba, as you know, dear reader, has been under a communist regime for a very long time.

As Wheelan writes: “Because the visit was licensed by the U.S. government, each member of the delegation was allowed to bring back $100 worth of Cuban merchandise, including cigars. Having been raised in the era of discount stores, we all set out looking for the best price on Cohibas [a premium Cigar brand] so that we could get the most bang for our $100 allowance. After several fruitless hours, we discovered the whole point of communism: The price of cigar was the same everywhere. There is no competition between stores because there is no profit as we know it. Every store sells cigars—and everything else for that matter—at whatever price Fidel Castro (or his brother Raul) tells them to.”

The government runs the public distribution system through around five lakh fair priced shops also known as ration shops. Unlike Cuba, these shops are very leaky. And food grains and kerosene that are sold through these shops do not reach the intended beneficiaries and find its way into the open market. The fair price shop owners benefit in this process.

As per the Economic Survey which was released last month, 54% of the wheat and 15% of the rice that is distributed through the public distribution system does not reach the intended beneficiaries. Along similar lines, 48% of sugar is siphoned off as well (as per last financial year’s Economic Survey). When it comes to kerosene, nearly 46% is siphoned off. 24% of domestic cooking gas and 40% of fertilizer is also siphoned off.

This means that the government of India loses a lot of money every year. As the economist Kaushik Das writes in An Economist in the Real World: “The problem arises from the fact that in India the food subsidy is handed to poor households via the ration shops. The government delivers subsidised grain to the store owner and the owner is then instructed to hand this over at the prescribed price to Below Poverty Line (BPL) households and to some other categories of vulnerable households.”

The assumption is that the shop owners will honestly pass on the grains and kerosene to those it’s meant for. As Basu writes: “If store owners were perfectly honest, this would work fine. But if they are not, then it is easy to see that many of them will give in to the temptation of making some easy money by selling off some of this subsidised grain in the open market where the price is higher, and turning away some of the deserving poor households or adulterating the grain that is to be sold to those households…A large share of the wheat meant to reach the poor never does because it is pilfered or sold on the open market en route.”

So what is the way out of this? One way is better policing. Nevertheless, as Basu writes: “It is easy to respond to this by asking for better policing. But we have to be realistic. Trying to police such a large system by creating another layer of police and bureaucracy will come with its own problems of corruption and bureaucracy.”

A better solution for this mess is to handover the subsidy directly to the poor households instead of going through the fair price shop owner. How can this be done? This can be carried out through the Aadhaar card linked to a savings bank account.

The penetration of Aadhaar cards has gone up at a very rapid pace all across India. As the Economic Survey points out: “The current government has built on the previous government’s support for the Aadhaar program: 210 million Aadhaar cards were created in 2015, at an astonishing rate of over 4 million cards per week. 975 million individuals now hold an Aadhaar card – over 75 percent of the population and nearly 95 per cent of the adult population…Aadhaar penetration is high across states. Nearly one-third of all states have coverage rates greater than 90 percent; and only in 4 states—Nagaland (48.9), Mizoram (38.0), Meghalaya (2.9) and Assam (2.4)—is penetration less than 50 per cent.”

These cards now need to be linked to savings bank accounts. This will ensure that instead of handing over subsidised grains to the intended beneficiary through the fair price shop route, the government can simply transfer money into his Aadhaar linked bank account. This money can then be used to buy the food grains from any shop instead of just the shops which come under the public distribution system.

As the Economic Survey points out: “After identifying beneficiaries, the government must transfer money to them. Every beneficiary needs a bank account and the government needs their account numbers. This constraint has been significantly eased by the Pradhan Mantri Jan Dhan Yojana, under whose auspices nearly 120 million accounts were created in the last year alone—at a blistering, record-setting pace of over 3 lakh accounts per day.”

The trouble is that despite this blistering pace, the savings account penetration continues to remain low across large parts of the country. As the Economic Survey points out: “Despite Jan Dhan’s record-breaking feats, basic savings account penetration in most states is still relatively low – 46 per cent on average and above 75 per cent in only 2 states (Madhya Pradesh and Chattisgarh).”

The sooner this is corrected, the faster the government can move to putting cash directly in the accounts of people instead of trying to distribute food grains through a leaky public distribution system.

To conclude, on March 11, 2016, the government moved one step closer to cash transfer of subsidies. The Lok Sabha passed the Aadhaar Bill. Given that the Bill was introduced as a money bill, the government doesn’t have to get the Bill passed through Rajya Sabha.

The column originally appeared on Vivek Kaul’s Diary on March 14, 2016