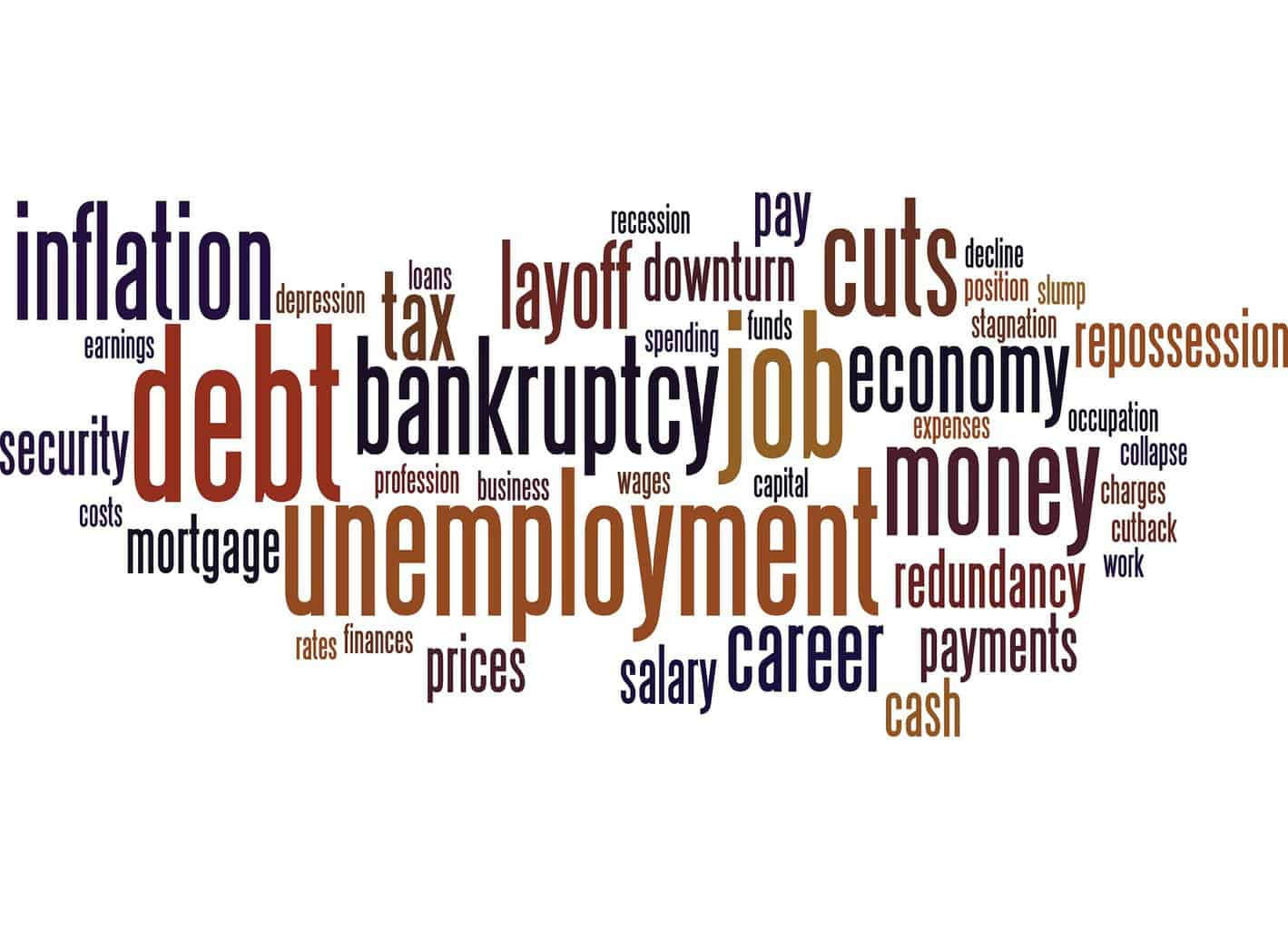 This piece is an extension of a piece on unemployment I wrote sometime back. Nevertheless, you don’t have to read that piece in order to make sense of this.

Honestly, this is probably the most disturbing data driven piece that I have ever written, despite the fact that I started writing on the issue of unemployment more than half a decade back, when it wasn’t very fashionable to do so.

The brunt of India’s unemployment problem is being borne by women. This is not to say that the men are having an easy time. They aren’t, given that many more men enter the labour force than women.

Nevertheless, the proportion of women who are employed and get paid was low to start with, and it has become even lower over the years. This, at a time, when more and more women are going to school and college.

As the All India Survey of Higher Education for 2018-19 points out: “Total enrolment in higher education has been estimated to be 3.74 crore with 1.92 crore male and 1.82 crore female. Females constitute 48.6% of the total enrolment.” But all this education isn’t helping them find paid employment.

Let’s start with the unemployment rate for men and women. The following chart plots this data since January 2016. 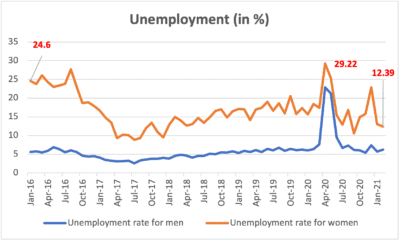 The above chart tells us several interesting things.

2) The unemployment rate for women in February 2021 is much lower than it was in January 2016, when Centre for Monitoring Indian Economy (CMIE) published the unemployment data for the first time. Have things improved? Keep reading to know the answer.

In order to answer the questions raised above, we need to understand how unemployment is defined. (For those who have read the earlier piece I wrote on unemployment, the next few paragraphs may seem like a repetition, which they are. I have repeated these paragraphs, simply because it is important for every piece to stand on its own, so that first time readers can also read and understand it easily).

They further point out: “A person is considered to be actively looking for a job if such a person has contacted potential employers for jobs, contacted employment agencies, placement agencies, appeared for job interviews, responded to job advertisements, online employment sites, made applications, submitted resumes to potential employers or reached out to family members, friends, teachers to look for jobs from them.”

To put it in short, waiting for a job offer to come, is not considered as actively looking for a job.

Let’s move on and plot the next two charts, the labour participation rate for men and women. 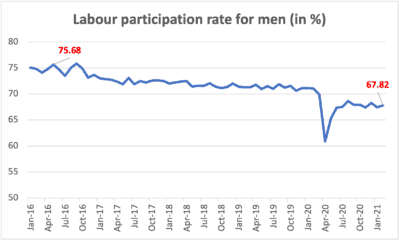 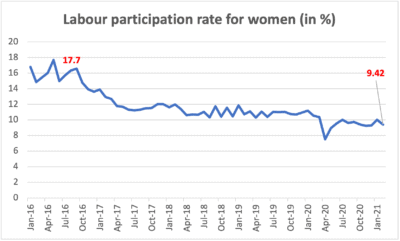 Now we are in a position to interpret the above two charts. Let’s do that pointwise.

1) The labour participation rate for women is miniscule on the whole. In February 2021, it stood at 9.42%. What does this mean? It means that a very small proportion of women over the age of 15, are employed and get paid for it or are unemployed and are actively looking for. a job. And the tragic part is that this rate is falling. It was at 17.7% in May 2016. Since then it nearly halved.

2) The labour participation rate of men is considerably higher. It was 67.82% in February 2021, even though it has been falling. Hence, two in three men over the age of 15, are employed and are getting paid for it, or are unemployed and actively looking for a job. For women, this ratio is less than one in ten. That’s the difference between the two sexes and it’s huge.

3) Urban women are in a much worse position on this front. The labour participation rate for urban women stood at 6.56% in February 2021. The rate had peaked at 16.58% in August 2016 and has been falling ever since. What does this mean? It means that it is more difficult for a woman to be employed and get paid, if she is in urban India than in comparison to rural India.

Also, the dramatic fall in the rate since August 2016, tells us that once a woman loses a job or a source of income, it is very difficult for her to get it back. And finally, very few women in urban India are stepping out of their homes to go to work and get paid for it. This has only increased post the spread of covid. The labour participation rate for women was 9.92% in January 2020. It’s not at 6.56%.

Let me just repeat this again. While the working age population for women over the last five years has gone up by 12.26%, the female labour force has collapsed by 37.11%. This also explains the fall in unemployment rate for women, given that much fewer women are actively looking for a job. Many women who haven’t been able to find jobs, have stopped actively looking and simply dropped out of the labour force.

Economists have struggled to come up with an explanation for this phenomenon. One possible explanation lies in the fact that the number of jobs available haven’t grown at the pace that could accommodate the new individuals, both men and women, entering the workforce. Hence, in a patriarchal society, men in deciding positions, have offered jobs to other men, forcing women who have searched and not found jobs to stop actively looking for a job and drop out of the labour force altogether.

So, the working age population has increased by 11.95 crore between May 2016 and February 2021, but the total labour force as such has fallen by 1.91 crore. What does this really mean?

Given that chances of men finding a job are higher, they continue to look for a job and the situation is not as bad as it is for women. Between January 2016 and February 2021, number of men who crossed the age of 15 and entered the working age population, increased by 6.54 crore to 56.30 crore.

During the same time, the number of men entering the labour force (that is either they were employed or were unemployed and actively looking for a job) increased by 83.62 lakh to 38.19 crore. Hence, in this case of men, the labour force at least hasn’t shrunk. 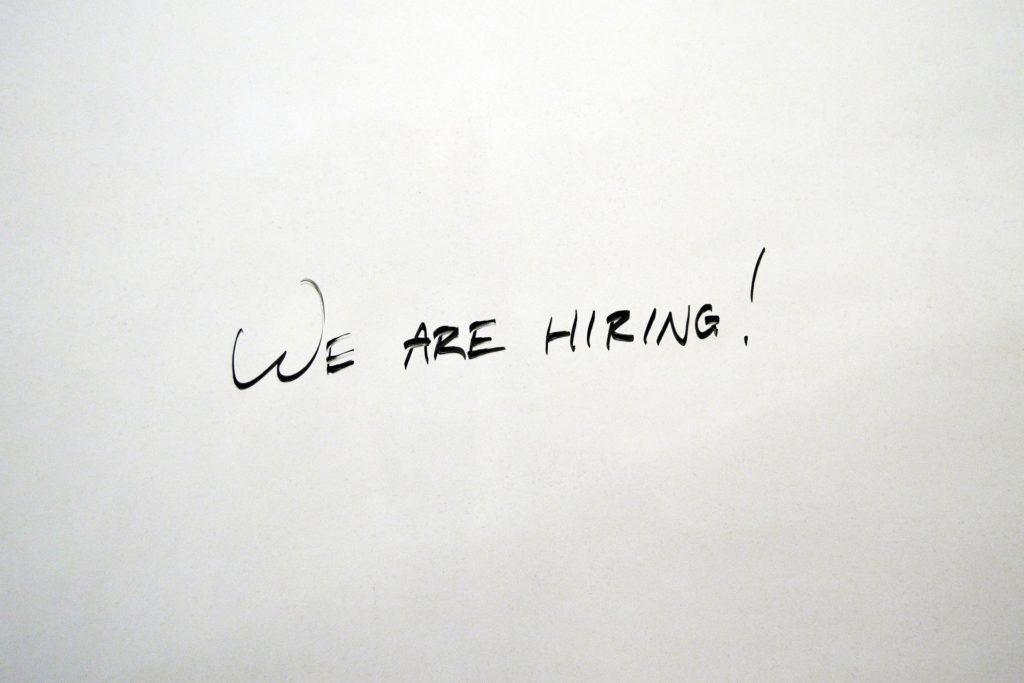 7) Urban women are likely to be more educated, but their labour participation rate is very low. Hence, what that means is that they are unable to utilise their education to work and earn money in the process.

To conclude, the world celebrated the international women’s day a few days back (on March 8). On that day, the corporates and the government institutions talked about the importance of the women who worked for them. The social media influencers talked about women. Many women talked about what it means for them to be a woman.

But almost none of them talked about one of the most important issues at hand, the fact that Indian women are bearing the brunt of India’s unemployment problem.

If you are reading this(man or woman) please share it with your friends and family. The first step towards solving any problem is knowing and acknowledging that it exists.