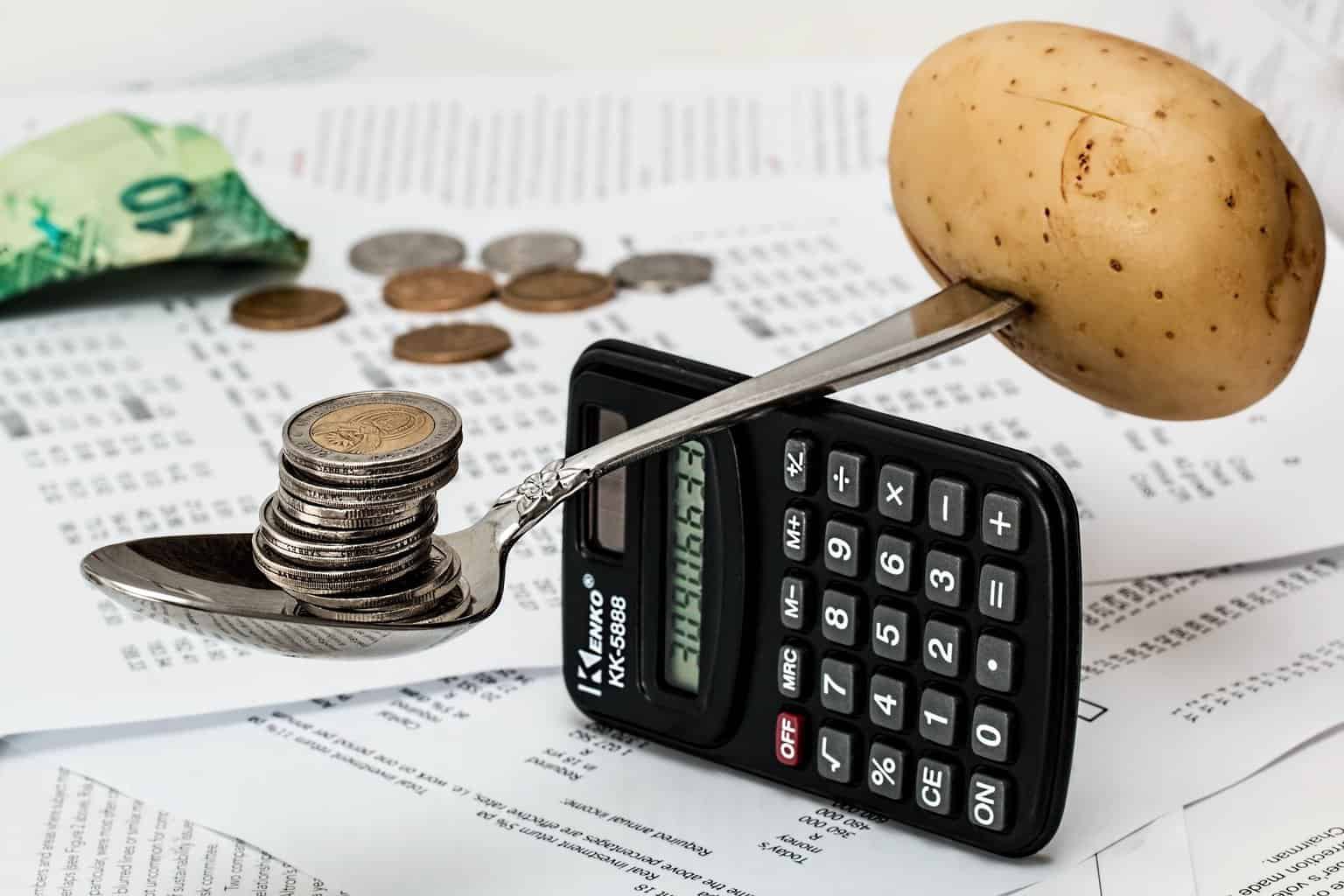 Those of you who read me regularly would know that I look at the government budget more as a statement of financial accounts and not much as an actual policy document, as many people do.

The reason is simple. The government has an opportunity to do right policy 365 days a year. But the annual budget numbers are released only once a year.

Keeping this in mind, in this piece I will look at the massive fiscal deficit that the union government will run this year and try to  analyse it in different ways and try connecting it to what it means for the economy as a whole and the ability of the government to spend money.

We will also look at whether the government is spending more money in order to get the economy going, as it has claimed to.
Let’s take a look at this pointwise.

1) The fiscal deficit for 2020-21 is projected to be at 9.5% of the gross domestic product (GDP). This is the highest fiscal deficit figure between 1970-71 and now (The fiscal deficit data is available in the Centre for Monitoring Indian Economy database from 1970-71 onwards). While this shouldn’t be surprising, the spread of the covid pandemic is not the only reason for it.

2) There is another interesting way to look at fiscal deficit. You might think that I am torturing numbers here and you are right to some extent, but I am only trying to show how big this fiscal deficit actually is.

Take a look at the following chart. It plots the fiscal deficit as a percentage of total government expenditure, over the years. 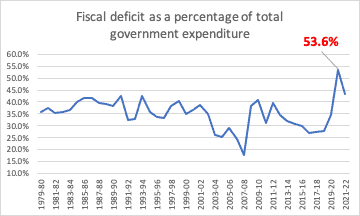 3) The question is why has the fiscal deficit jumped to such a high level? The simple answer is that the government hasn’t earned the total amount of tax it had projected, thanks to the spread of the covid pandemic. Let’s start with the net tax revenue or what is left after the government has shared the tax collected with the state governments.

The government expected to earn a net tax revenue of Rs 16.36 lakh crore this year, when the budget for this year was presented in February 2020.  It now hopes to earn Rs 13.45 lakh crore. This is Rs 2.89 lakh crore or 17.8% lower. This explains a part of the jump in the fiscal deficit from an expected level of Rs 7.96 lakh crore to Rs 18.49 lakh crore. But it still doesn’t give us the complete story.

4) In 2020-21, the government expected to earn a significant amount of money by selling or disinvesting its stakes in public sector enterprises. The amount it expected to earn through disinvestment was Rs 2.1 lakh crore. It has now been revised to just Rs 32,000 crore or 15.2% of the expected amount. There is gap of Rs 1.78 lakh crore here and this has also majorly pushed up the fiscal deficit.

The only possible explanation here is that the government, as usual, has moved very very slowly on the procedural formalities required to disinvest its stakes in public sector firms. 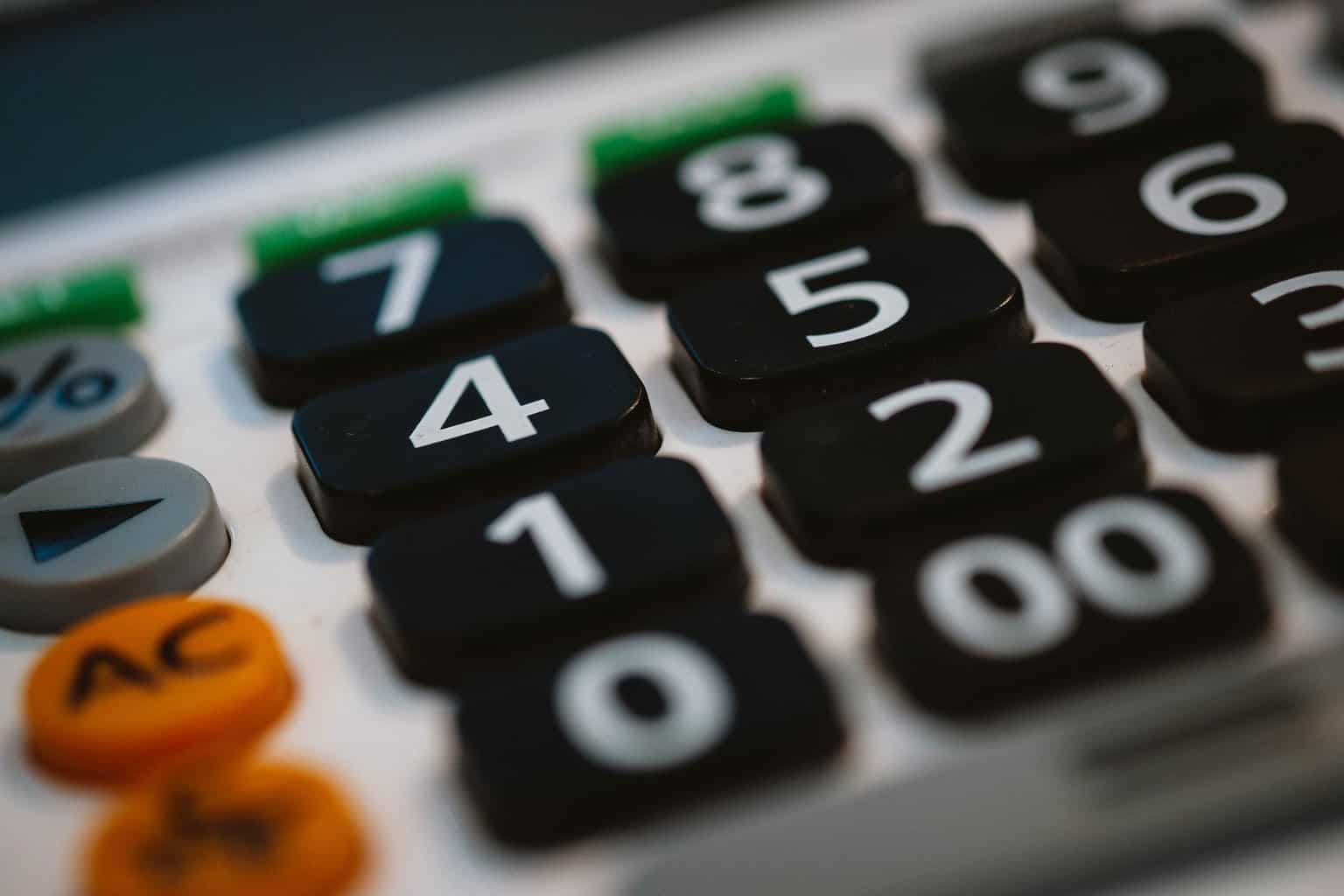 5) A lower tax collection of Rs 2.89 lakh crore and lower disinvestment receipts of Rs 1.78 lakh crore, still only add up to around Rs 4.67 lakh crore and doesn’t totally explain the huge jump in the fiscal deficit.

There is a third major reason. I write about it in detail here. And I urge you click on this link and read it. I will offer a short summary here. The Food Corporation of India (FCI) buys rice and wheat directly from farmers at a minimum support price announced by the government. It then sells this rice and wheat through the public distribution system at a much lower price, in order to meet the needs of food security.

Much of this gap was filled by FCI taking on loans from the National Small Savings Fund, where all the money collected under the various small savings schemes, ends up. As of March 2020, the FCI owed NSSF Rs 2.55 lakh crore.

The accounting jugglery over the years, essentially helped the government to declare a lower expenditure and hence, a lower fiscal deficit.

The government has now decided to end this and take on the total food subsidy offered by FCI as an expenditure. Hence, in February 2020, when the budget for this year was presented the allocation of food subsidy to FCI had stood at Rs 77,983 crore. It has now been revised to Rs 3.44 lakh crore. In fact, the overall food subsidy has been increased from Rs 1.16 lakh crore to Rs 4.23 lakh crore. This is a good thing that has happened because ultimately the main aim of the government budget is to present financial accounts as correctly as possible.

6) Other than taxes and disinvestment, the government also earns money under the heading non tax revenue. This includes dividends that the government earns from public sector enterprises, public sector banks, financial institutions like the Life Insurance Corporation of India and the dividend from the Reserve Bank of India. It also includes many other ways of making money.

The non tax revenue that the government had hoped to earn this year was Rs 3.85 lakh crore and it ended up earning Rs 2.11 lakh crore, which was Rs 1.74 lakh crore lower. This was primarily on account a massive fall in dividends earned.

If we add this to the earlier Rs 7.74 lakh crore, we get Rs 9.48 lakh crore. The fiscal deficit went up from a projected Rs 7.96 lakh crore to Rs 18.49 lakh crore primarily because of these four reasons.

Three of these reasons, lower tax collections, lower disinvestment receipts and lower non tax revenue, are on the earnings side. And one reason, higher food subsidy is on the expenditure side. 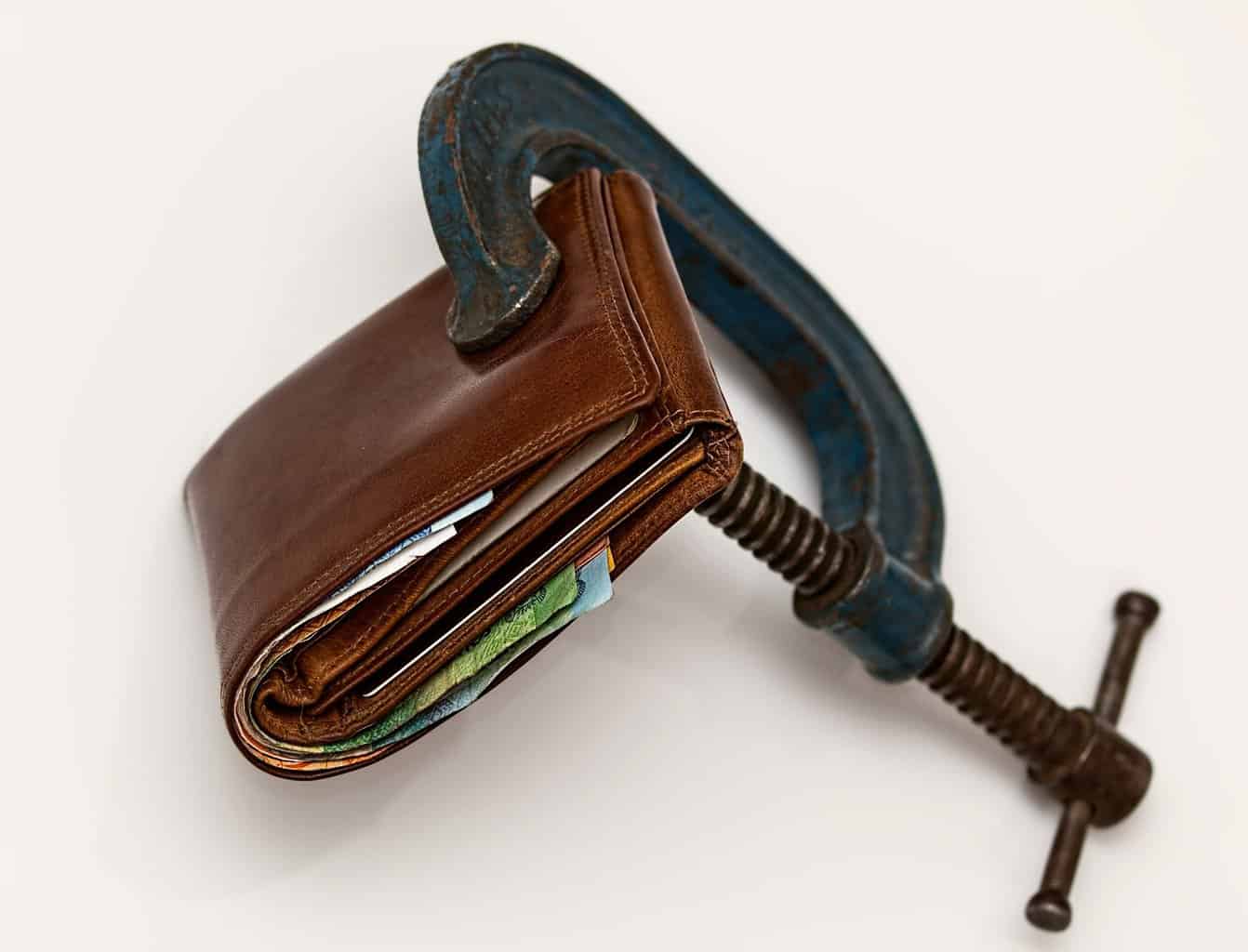 7) The finance minister Nirmala Sitharaman in her post budget interaction with the media said the government has spent a lot of money in order to get the economy going. The Business Standard reports her as saying, we have spent, we have spent and we have spent. The logic here is that in an environment where personal consumption has slowed down and industrial expansion is not happening, the government has to become the spender of the last resort, in order to get the economy going again.

The business media today is full of headlines around the government spending its way out of trouble. But do the budget numbers really reflect that?

Let’s try and see what the numbers tell us. The total government expenditure budgeted for 2021-22 is Rs 34.83 lakh crore. This is just a little more than the Rs 34.5 lakh crore the government expects to spend this year.

Hence, the year on year, overall government spending next year will actually come down and not go up. Having said that, the capital expenditure in 2021-22 is budgeted to be at Rs 5.54 lakh crore, which is 26.2% more than the Rs 4.39 lakh crore, the government expects to spend in 2020-21. This is some good news, but doesn’t deserve the emphatic spend, spend, spend, statement.

8) What about the current financial year? The government plans to spend a total of Rs 34.5 lakh crore. This is 13.4% more than the Rs 30.42 lakh crore it had planned to spend when it presented the budget. Once we adjust for the fact the food subsidies have been properly accounted for and that has added Rs 3.07 lakh crore to the government expenditure, the actual expenditure goes down to Rs 31.43 lakh crore (Rs 34.5 lakh crore minus Rs 3.07 lakh crore). This is around 3.3% more than the amount budgeted of Rs 30.42 lakh crore, at the time of the presentation of the budget.

In fact, if we look at the food subsidy paid during April to December 2020, it amounts to Rs 1.25 lakh crore. With the budgeted amount being at Rs 4.23 lakh crore, close to Rs 3 lakh crore of food subsidy still remains unpaid. This will be paid during the last three months of 2020-21.

This money has already been spent by FCI and other agencies during this year and years gone by. Once FCI receives this money, it will pay off the money it owes to NSSF. Hence, there is really no extra spending happening here.

Hence, the increase in spending in 2020-21, or the fiscal stimulus as economists like to call it, hasn’t been because of the covid pandemic, it was happening anyway.

To conclude, it is clear that the government is not spending more in 2021-22 on the whole, though there is some increase in capital expenditure and that’s good. In 2020-21, the government has actually spent more, but then much of it was planned before covid and not after it.

It also tells us that once we take the real fiscal deficit into account, there isn’t much that the government can do to spend its way out of trouble. The good thing is that the government has decided to clean up its books. And that will have repercussions on the total amount of money it is able to spend during the course of this year and the next. The mistakes that we make in our past always come back to haunt us.

Dear Reader, clearly this piece should tell you how nuanced numbers can get, if one decides to dig a little deeper. Of course, you won’t get such a nuanced reading of the budget numbers anywhere in the mainstream media.

Hence, it is important that you continue supporting my work.