I have been following  the issue of domestic two-wheeler sales on a regular basis. Two wheelers basically comprise of motorcycles, scooters and mopeds (around 6.37 lakh mopeds were sold in 2019-20).

Domestic two wheeler sales are a very important economic indicator which give us a good indication of the purchasing capacity of middle class India. Hence, it is important that they are interpreted in the correct way.

The sad part is that the mainstream media in its quest to get advertisements from automobile companies isn’t really doing that.

Not for a moment I am suggesting the media is making this data up. They are simply reporting the numbers that the Society of Indian Automobile Manufacturers (SIAM) is providing them with. SIAM is basically the lobby representing major vehicle and vehicular engine manufacturers in India.

SIAM reports the number of units of two-wheelers leaving the gates of manufacturers or factory gate shipments. In simpler words, these are units which have been sold by manufacturers to dealers across the country, who in turn will sell to the end consumers. So, the SIAM data does not represent retail sales or the sales made to the end consumer. If we look at retail sales, the real situation is revealed and the picture that emerges is not so pretty.

Let’s take a look at this issue pointwise.

The Federation of Automobile Dealers Associations (FADA) reports the number of units of two wheelers registered at the Regional Transport Offices (RTOs) across the country after they have been sold to the end consumer. Hence, the sales number reported by FADA is a better representation of sales to end consumers. It uses the government’s Vahan 4 database to report these numbers.

2) Take a look at the following chart. It plots the two-wheeler sales over the course of the current financial year (i.e. 2020-21), as reported by SIAM and FADA. 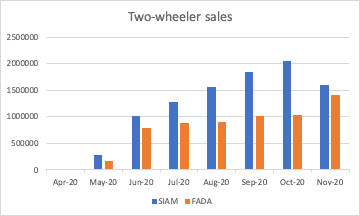 As is clear from the above chart, in each month the SIAM sales numbers have been more than the FADA sales numbers. In fact, as per SIAM, a total of around 9.64 million units of two-wheelers were sold in India during this financial year. FADA puts the number at 6.19 million units, almost 36% lower. This is a difference of close to 3.45 million units.

4) So what does this mean? This basically means that while manufacturers have been selling two-wheelers to retailers and retailers haven’t been able to sell a significant portion of what they have bought from manufacturers to the end consumer. Channel stuffing has been carried out and now the retailers have ended up with a significant amount of inventory. FADA suggests that the average inventory of two-wheelers with dealers is at 45-50 days. This is at the end of the festival season. Last year, at the end of the festival season the two-wheeler retailers had an average inventory of 35-40 days. What this means is that channel stuffing has gone up during the course of this year and last year’s problem has continued taking on an even bigger form.

5) Why has channel stuffing gone up? A possible explanation for this lies in the fact that both manufacturers and retailers stocked up in the hope of sales picking up during the festival season. In fact, the sales did pick up in November, with 1.41 million units and more (if we take three states for which FADA does not have data for), being sold at the retail level, the best during the course of this financial year. But this best wasn’t good enough to exhaust a bulk of the inventory build up that happened, given that retailers still have close to 50 days inventory.

Interestingly, if we look at the total sales of two-wheelers as per FADA during the 42-day festival season, from Navratri to Diwali, they were at 2.03 million units, 6.3% lower than last year. Clearly, when it comes to two-wheelers, the bets of both the manufacturers and retailers have turned out to be way too optimistic. The so-called revival in sales as per SIAM can be correctly interpreted as scooters and motorcycles stored in godowns of retailers, waiting to be sold.

6) So how bad is the situation? Let’s concentrate on FADA data for this, simply because it represents real consumer sales. Also, let’s ignore the months of April and May, when a lockdown to prevent the spread of the covid pandemic was in place and very little actual sales happened at the retail level. How do things look between June and November 2020, in comparison to the same period in 2019?

Around 6.04 million units were sold at the retail level between June and November 2020, which is 28% lower than the 8.38 million units sold during the same period last year. Clearly, retail sales have taken a huge beating.

Take a look at the following chart, which plots the fall in retail sales which happened in a given month this financial year vis a vis last financial year. Also, I have considered sales in October and November together simply because the festival of Diwali was in October last year and in November this year. This makes the comparison more robust. 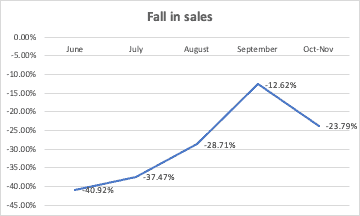 As can be seen, the fall in sales this year was at 40.92% in June. (I have ignored the April-May data because of the lockdown). The fall was at 12.62% in September. In the festival season of October-November it stood at 23.79%. This is a worrying sign.

7) A few two-wheeler manufacturers have made a lot of song and dance about their sales over the last few months. Let’s take a look at how things look for them during the months of October and November this year vis a vis last year. This is FADA data, hence, the usual disclaimer applies. 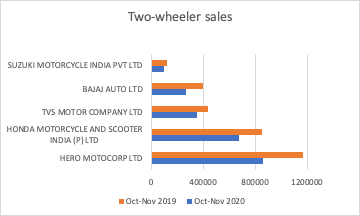 As can be clearly seen from the above chart, the sales of the five largest two-wheeler companies during October and November this year, have been lower than the last year. On the whole, their sales were 2.25 million units, around a quarter lower than last year. The question is: what was the song and dance all about. Pleasing the government?

Finally, what will the future look like? Let’s take a look at this pointwise.

1) With an inventory of around 50 days at the retail level, the number of two-wheelers leaving the factories of two-wheeler manufacturers in the months to come will come down, unless retail sales improve dramatically. This has already happened in November with the difference between SIAM data and FADA data narrowing. The chances of retail sales picking up dramatically are low.

2) As far as retail sales are concerned, it will be interesting to see how the post-festival season period will play out. Clearly, the months of October and November were not as good this year as they were last year.

3) Also, it needs to be kept in mind that a good portion of the sales during June to November, would have been pent up demand or people who wanted to buy a two-wheeler during April and May, and couldn’t buy due to the lockdown. Further, a significant number of people must have bought two-wheelers over the last few months to avoid taking public transport. Has this demand exhausted? It is difficult to answer this question with total certainty, nevertheless, a significant portion of this demand must have led to purchases by now.

4) How the banks go about lending two-wheeler loans in the months to come will be interesting to watch. Thanks to a case which is currently on in the Supreme Court, banks haven’t gotten around to marking retail loans of under Rs 2 crore which have gone bad, as bad loans.

To conclude, it will be interesting to see how two-wheeler sales go in the remaining part of the year. From what data and logic currently suggests, things will continue to remain difficult this year. And that in turn suggests that the ability and the mindset of the Indian middle class to pay EMIs at this juncture will continue to remain limited.

Finally, petrol prices are on their way up.