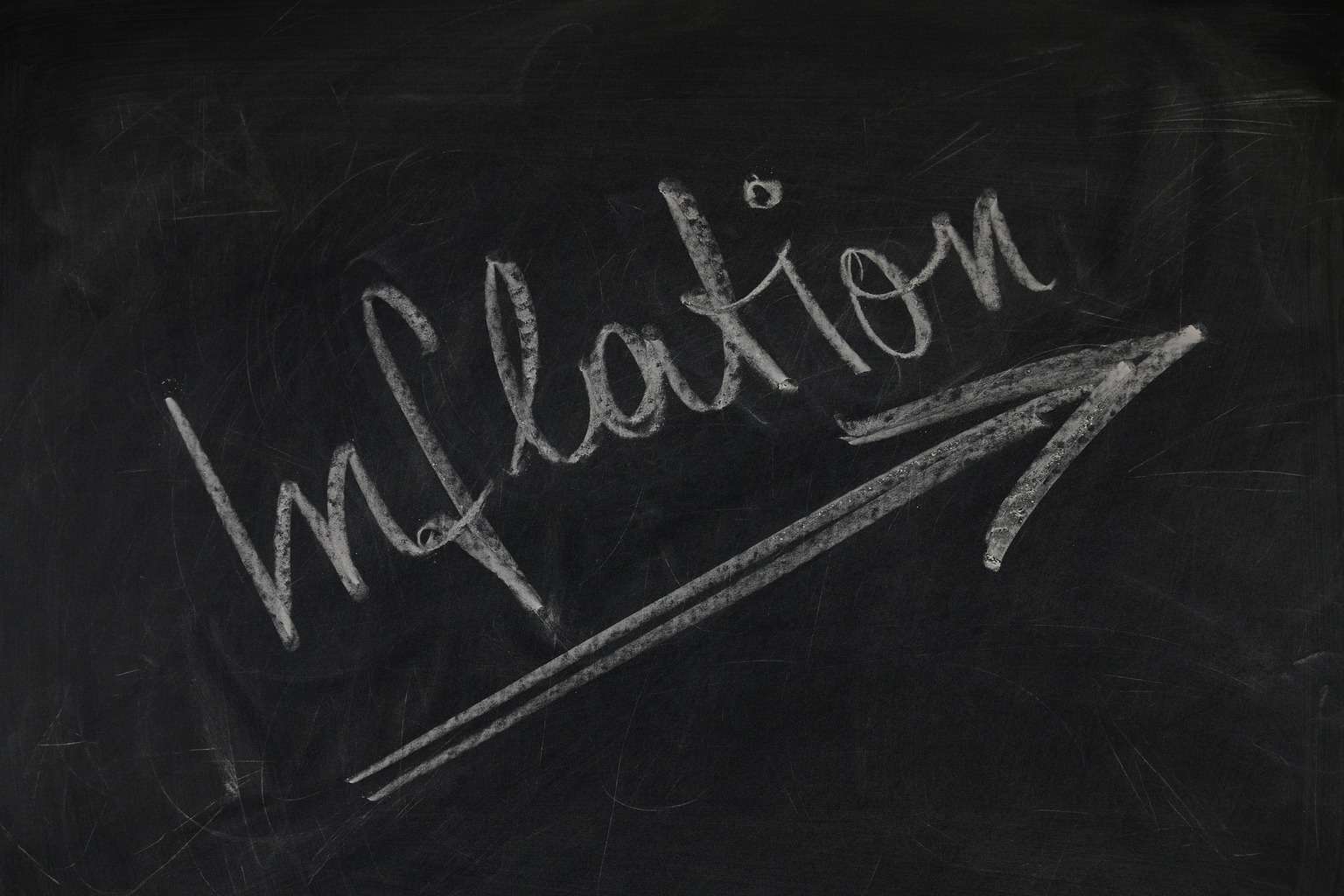 In September, inflation as measured by the consumer price index continued to remain in elevated territory at 7.34%. Inflation is the rate of price rise in comparison to the same period last year.

Let’s take a look at this relatively high inflation of 7.34%, pointwise.

2) Interestingly, eight out of the ten highest inflation months in the last five years have been in 2020. What this clearly tells us is that 2020 has been a year of high inflation. Alongside this consumer demand has collapsed and there is stagnation in the economy. Hence, 2020 has been the year of stagflation (stagnation + inflation) as well. While, this wasn’t clear at the beginning of 2020 when covid hadn’t made an appearance (and I had said so), it is very clear by now (and I am saying so).

3) In an environment where consumer demand has collapsed, prices should be falling and not going up. What’s the logic here? When consumer demand collapses, firms in order to get people to consume, cut prices. This leads to lower inflation or even deflation (in worst cases, when prices fall).

But that hasn’t happened in the Indian context. The question is why? The following chart plots food inflation (using data from the consumer price index) over the last five years and possibly has the answer. 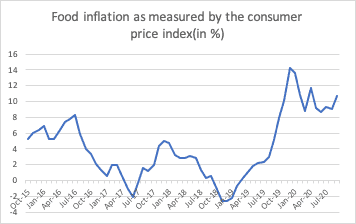 Food inflation in India has been rising since early 2019 and it has continued to remain high in the post-covid environment. The inflation of vegetables, pulses, oils and fats and egg, meat and fish, was in double digits in September. Vegetable prices led the way and rose at the rate of 20.73% during the course of the month, with potato prices rising 101.98%.

4) Food carries a weight of 39.06% in the overall consumer price index. In the rural part, it carries a weight of 47.25%. Hence, elevated food inflation pushes up overall inflation. Also, the thing to notice here is that food prices were high even before the covid-pandemic struck. This was due to weather disruptions among other things. The trend of high food prices has continued post-covid. 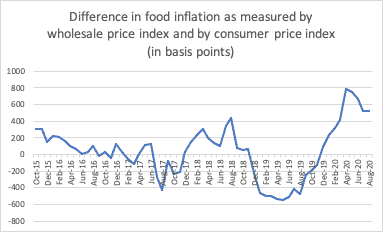 What does this chart tell us? It tells us that post-covid, the food prices at the consumer level have been growing at a much faster rate than food prices at the wholesale level. The average difference between April and August was 610 basis points. One basis point is one hundredth of a percentage. The wholesale price index data for September is yet to come in (It will be published tomorrow).

What this means is that, despite the end consumers of food paying a higher price, the farmers are largely not benefitting from this rise in food prices, given that they sell their produce at the wholesale level.
This difference can be because of a few reasons.

a) A collapse in supply chains has led to what is being sold at the wholesale level not reaching the consumers at the retail level, thus, leading to higher prices for the consumer.

b) This could also mean those running the supply chains hoarding stuff, in order to increase their profit.

In the past, high food inflation has seeped into wage inflation and overall food inflation. It remains to be seen whether this happens this time around as well. The monetary policy committee doesn’t think so, but then it has as much control over food prices as it has over the finance ministry.

Interestingly, in the monetary policy report released a few days back, the RBI says in this context:

It goes on to say:

“However, a delayed normalisation of supply chains, heavy rains and floods in some states and demand-supply imbalances in key items such as pulses could exert further upward pressure on the headline inflation and keep it higher by around 50 basis points. On the other hand, an accelerated softening of food inflation due to an early restoration of supply chains, ample buffer stocks and efficient food stock management by the Government could bring headline inflation below the baseline by up to 50 basis points.”

So, the RBI in the monetary policy report is basically saying it could go either ways. In the process, it has hedged itself well, either ways.

8) Until the dynamic of whether food inflation is seeping into overall inflation becomes clear, it will be very difficult for the RBI to cut the repo rate any further than 4%, where it currently stands. The repo rate is the interest rate at which the RBI lends to banks.

Also, if the food inflation starts seeping into the overall inflation, the easy money policy of the RBI, where it has been printing and pumping money into the economy to drive down the interest rates, will have to take a backseat.

To prevent this from happening the RBI intervenes in the foreign exchange market by selling rupees and buying dollars. When the RBI sells rupees the money supply in the economy goes up. The RBI has an option of sterilising this rupee inflow by selling government bonds and sucking out the excess money. But it has chosen not to do this, which is in line with its easy money policy.

In the recent past, the RBI has allowed the rupee to appreciate against the dollar, by not buying dollars, and not adding rupees to the money supply through this route. This is primarily because there is already too much easy money floating around in the financial system.

This easy money hasn’t led to inflation because banks are going slow on lending and borrowers are being very careful before borrowing. This has ensured that the dynamic of too much money following the same amount of goods and services hasn’t played out and hasn’t created an even higher inflation.

Nevertheless, as the economy continues to recover there is a chance of this happening. Hence, the RBI needs to be careful with its easy money policy, especially if food inflation starts seeping into the overall inflation.

In the latest monetary policy, the monetary policy committee had said: “The MPC also decided to continue with the accommodative stance as long as necessary – at least during the current financial year and into the next financial year – to revive growth on a durable basis and mitigate the impact of COVID-19 on the economy, while ensuring that inflation remains within the target going forward [italics added].”

In simple English, this means that the RBI will keep driving lower interest rates to create growth. Up until now it doesn’t seem to be worried about its inflation mandate (to maintain the inflation as measured by the consumer price index between the range of 2-6%). But if food inflation remains high and seeps into overall inflation, the RBI will have a major problem at its hand, with all the liquidity it has pumped into the financial system.

9) Even if inflation falls to 4.5-5.4% as the RBI expects it to, the real return on fixed deposits after adjusting for inflation and taxes paid on the interest earned, will continue to remain in negative territory. And that’s not good news for savers as their savings will lose purchasing power. It’s great news for borrowers because inflation means they are repaying their loans in money which is worth less than it was at the time it was borrowed.

10) As much as economists might want us to believe, economics is no science. There are too many ifs and buts and maybes to the predictions that are made. And this is something that every reader needs to be aware of. This is true as much of this situation as it is of others.