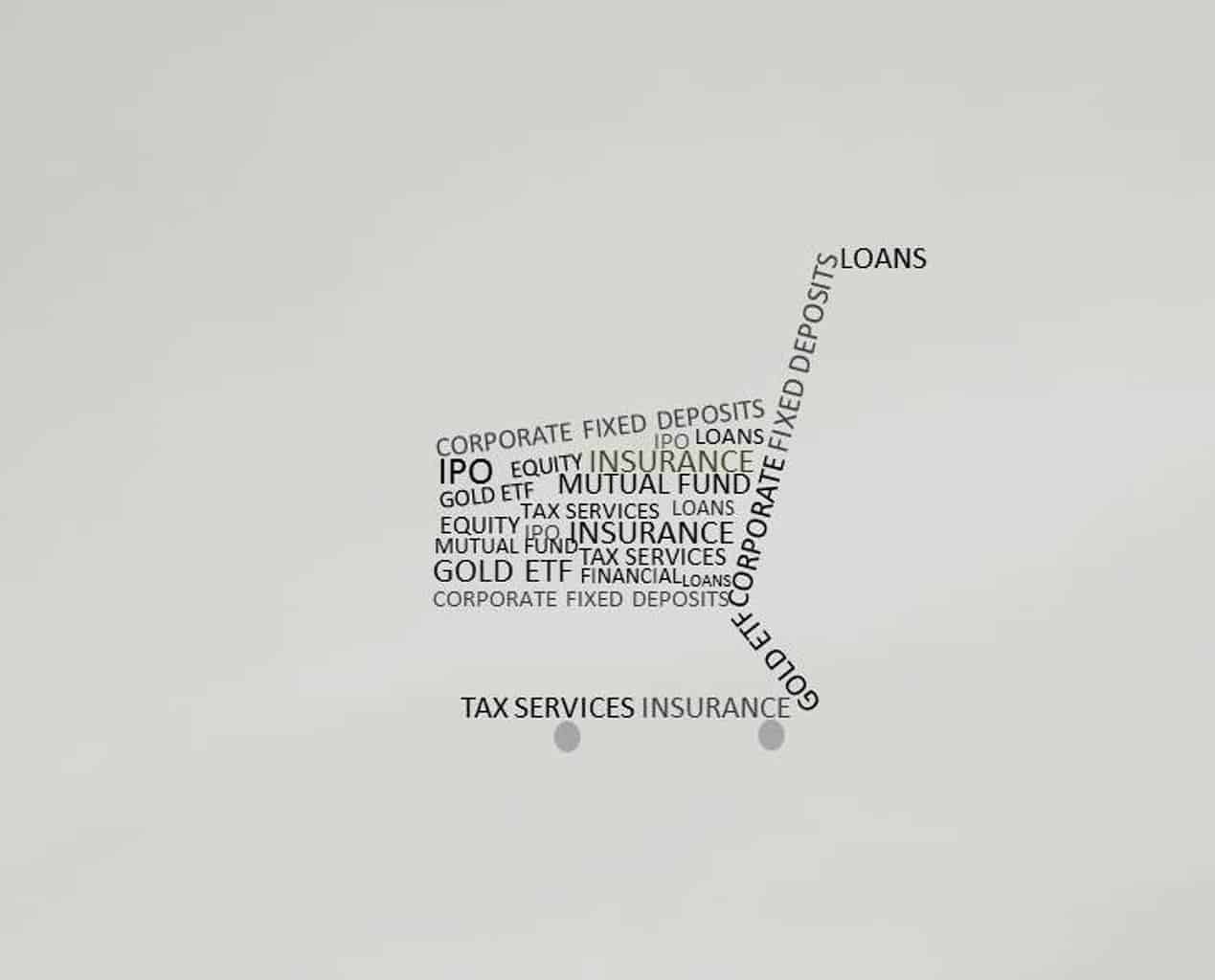 The RBI has been trying to drive down the interest rates in the economy since January 2019. In January 2019, the repo rate was at 6.5%. Since then it has been cut by 250 basis points and is now at 4%. One basis point is one hundredth of a percentage.
This has had some impact in driving down fixed deposit interest rates of banks. Take a look at the following chart. 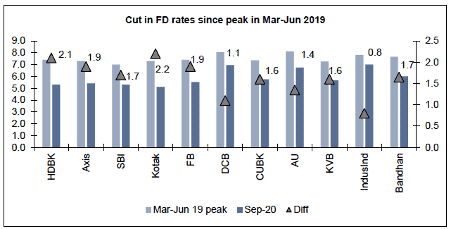 From the peak they achieved between March and June 2019, fixed deposit interest rates have fallen by 170 to 220 basis points.
This in an environment where the inflation has been going up. In March 2019, inflation as measured by the consumer price index was at 2.9%. It had jumped slightly to 3.2% by June 2019. In August 2020, the latest data available for inflation as measured by the consumer price index, had jumped to 6.6%. Meanwhile, fixed deposit rates which were around 7-8%, are largely in the range of 4-6% now (of course, there are outliers to this).

Hence, inflation is greater than interest rates on fixed deposits, meaning the purchasing power of the money invested in fixed deposits is actually coming down.

In fact, interest rate on savings bank accounts, which in some cases was as high as 6-7%, has also come down. Take a look at the following chart. 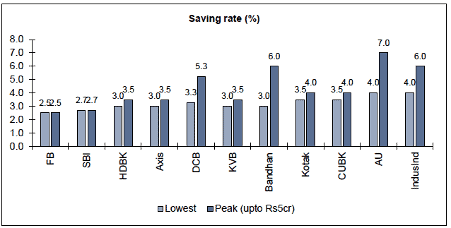 The fall in interest rates is not just because of the RBI cutting the repo rate. A bulk of this fall has happened post the covid breakout. Banks haven’t lent money post covid.

Between March 27 and September 25, the outstanding non-food credit of banks has fallen by 1.1% or Rs 1.1 lakh crore to Rs 102 lakh crore. This means that people and firms have been repaying their loans and net-net in the first six months of this financial year, banks haven’t given a single rupee of a fresh loan.

Banks give loans to Food Corporation of India and other state procurement agencies to buy rice and wheat directly from the farmers. Once these loans are subtracted from overall lending by banks, what remains is non-food credit.

During the same period, the deposits of banks have risen by 5.1% or Rs 6.97 lakh crore to Rs 142.6 lakh crore. With people saving more, it clearly shows that the psychology of a recession is in place.

When this mechanism breaks down to some extent, as it has currently, banks need to cut interest rates on their deposits, given that they are not earning much on the newer deposits. This is bound to happen and accordingly, interest rates on fixed deposits have fallen.

While the supply of deposits has gone up, the demand for them in the form of loans, hasn’t. This has led to the price of deposits, which is the interest paid on them, falling. 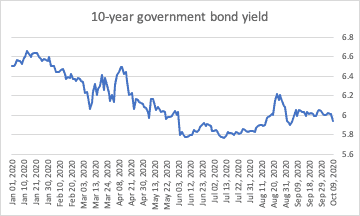 The yield on a government bond is the return an investor can earn if he continues to own the bond until maturity. The above chart clearly shows that as the government has borrowed more and more through the year, the interest rate at which it has been able to borrow money has come down, thanks to the RBI and its money printing.

Of course, with banks not lending on the whole, they are happy lending to the government. In fact, in his speech today, the RBI governor Shaktikanta Das said that the central bank planned to print and pump another Rs 1 lakh crore into the financial system in the days to come.

With more money expected to enter the financial system the 10-year government bond yield fell from 6.02% yesterday (October 8) to 5.94% today (October 9), a fall of 8 basis points during the course of the day.

The monetary policy committee also decided to keep the “accommodative stance as long as necessary”, with only one member opposing it. In simple English this means that the RBI will keep driving down interest rates as long as necessary “at least during the current financial year and into the next financial year – to revive growth on a durable basis and mitigate the impact of COVID-19 on the economy.”

The assumption here is that as interest rates fall people will borrow and spend more and corporations will borrow and expand more. This will help the economy grow, jobs will be created and incomes will grow. While, this sounds good in theory, it doesn’t really play out exactly like that, at least not in an Indian context.

1) A bulk of deposits in Indian banks are deposited by individuals. In 2017-18, the latest data for which a breakdown is available, individuals held around 55% of deposits in banks by value. This had stood at 45% in 2009-10 and has been constantly rising. Hence, it is safe to say that in 2020-21, the proportion of bank deposits held by individuals will clearly be more than 55%.

When interest rates on deposits (both savings and fixed deposits) go down individuals get hurt the most. There are senior citizens whose regular expenditure is met through interest on these deposits. When a deposit paying 8% matures and has to be reinvested at 5.5%, it creates a problem. Either the family has to cut down on consumption or start spending some of their capital (the money invested in the fixed deposit).

This also disturbs many people who use fixed deposits as a form of long-term saving. The vagaries of the stock market are not meant for everyone. Also, in the last decade returns from investing in stocks haven’t really been great.

3) It’s not just about bank interest rates going down. Returns on provident fund/pension funds which hold government bonds for long time periods until maturity and post office schemes (despite being higher than banks), also come down in the process.

But corporates love to constantly talk about high interest rates as a reason not to invest. This is just a way of driving down interest on their current debt.

“Sowing disorder by confusing issues is a tried-and-trusted, distressingly often successful routine by which stakeholders, official and private, plant the seeds of policy/regulation reversal in India.”

One can understand interest rates going down in an environment like the current one, but there is a flip side to it as well, which one doesn’t hear the experts talk about at all. Also, anyone has barely mentioned the excess liquidity in the financial system, which currently stands at Rs 3.9 lakh crore. Why is that? Let’s look at this pointwise.

But with post tax real returns from fixed deposits (after adjusting for inflation) in negative territory, many investors continue to bet on stocks, despite the lack of earnings growth.

3) Banks invest a large proportion of the deposits they gather into government bonds. When bond yields fall, bond prices go up. This leads to a higher profit for banks. This in an environment where banks aren’t lending. Hence, bankers love lower interest rates.

4) Corporates love lower interest rates at all points of time, irrespective of whether they want to borrow or not. I don’t think this needs to be explained.

5) The government loves low interest rates because it can borrow at lower rates. Second, with the stock market going up, it can sell a positive narrative. If the economy is doing so badly, why is the stock market doing well?

6) This leaves economists. Economists love lower interest rates because the textbooks they read, said so.

The question is do lower interest rates or interest rates make a difference when it comes to borrowing by an average Indian? Let’s take a look at non-housing retail borrowing from banks over the years. In 2007-08 it stood at 5.34% of the gross domestic product (GDP). In 2019-2020, it stood at an all-time high of 5.97% of GDP.

In a period of 12 years, non-housing retail borrowing from banks, has barely moved. What it tells us to some extent is that the idea of taking on a loan to buy something (other than a house), is still alien to many Indians.

So, the idea that interest rates falling leading to increased retail borrowing is a little shaky in the Indian context.

To conclude, today the RBI governor Shaktikanta Das gave a speech which was more than 4,000 words long. In this speech, the phrase fixed deposit interest rate did not appear even once.

A whole generation of savers is getting screwed (for the lack of a better word) and the RBI Governor doesn’t even bother mentioning it in his speech. The RBI seems to be constantly worried about the interest rate at which the government borrows.

A central bank which only bats for the government, corporates and bond market investors, is always and anywhere a bad idea.

Shaktikanta Das’ RBI is at the top of this bad idea.