Yesterday (September 22, 2020), the Rajya Sabha passed the Essential Commodities (Amendment) Bill, 2020. The Lok Sabha had passed the Bill a week back on September 15. The passage of this Bill essentially dropped cereals, pulses, oilseeds, edible oils, potatoes and onions, from the definition of essential commodities.

The government may regulate the supply of food items only under extraordinary circumstances like war, famine, extraordinary price rise and a natural calamity of grave nature.

In this piece we will concentrate on what this change means in the context of onions.

In fact, on more than a few occasions in the past, the price of onions has crossed Rs 100 per kg, causing a lot of pain across households, with the onion being an important ingredient in different kinds of food all across the country. Elections have been lost on the price of onions going up, making it a politically sensitive vegetable.

Take a look at the following chart, which basically plots the inflation of onions as measured by the consumer price index. Inflation is the rate of price rise. 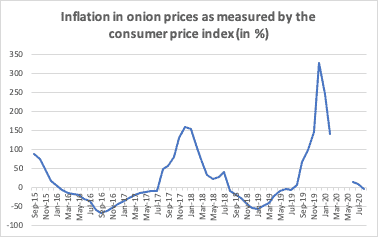 (The curve is broken towards the end because data for a couple of months wasn’t available due to the covid-pandemic).

The inflation of onions is all over the place. It just tells us how volatile onion prices are at the consumer level. It’s not just the consumers who face this volatility, even the farmers face volatility in the price they get for the onions that they grow.

All over the place

What does this mean for the consumer and the farmer? The onion consumer doesn’t get to buy onions at a consistent price, the prices go up and down, quite a lot. On the other hand, the onion farmer doesn’t get to sell onions at a consistent price. There is always a chance that when the farmer goes out to sell the onions he has grown, there is a price crash. In that sense, growing onions for a living becomes a very risky profession.

The question is why are onion prices so volatile? This is where things get interesting. Take a look at the following chart (I know, I am throwing a lot charts at you, dear reader, but these are simple straightforward charts.) The chart plots the wholesale prices of onions through the months, over the years.

What does the chart tell us? It tells us that the wholesale onion price start rising around May and they keep rising till around August-September. This is where the entire problem lies, both for consumers as well as farmers.

Also, the onions produced during the Rabi season are most amenable to storage. The supply of fresh onions hitting the market between May to September is simply not enough to meet the demand. Given this, a part of demand has to be met through stocks of Rabi onions maintained by traders and wholesalers.

When the supply from the Rabi season starts to run out, the price of onions tends to rise. If there are any rains it makes the situation worse. The rains not only destroy the early Kharif crop which starts hitting the market in late September-early October, but they also destroy the Rabi crop that has been stored.

In fact, this is precisely what has happened in 2019 as well as 2020. As the Economic Survey for 2019-20 points out: “Due to heavy rains in August-September, 2019, the kharif crop of onions was adversely affected leading to lower market arrivals and upward pressure on onion prices. This kharif crop usually caters to the demand during the period from October to December till fresh produce from late kharif crop comes in the market.” Something similar has happened this year as well, with rains destroying the onion crop in Karnataka.

Hence, as an economist would put it, there is a structural problem at the heart of the onion trade in India. The government notices this only when there is a price rise and the media starts splashing it. Hence, there is always a knee-jerk reaction.

The government has a fixed way of reacting. It either invokes the Essential Commodities Act (ECA), 1955, or bans exports of onions (and if not that, it makes exports unviable by increasing the minimum export price).

The idea here being that as soon as stock limits are imposed anyone who has onions stocked beyond the limit will have to sell them in the open market and that will push down wholesale prices and in the process retail prices (at least, that is what the government hopes).

This year on September 14, onion exports were banned under the Section 3 of the Foreign Trade (Development and Regulation) Act, 1992. The trigger was the more than doubling in the average price of onion arriving at India’s biggest onion market at Lasalgaon near Nashik, between end of March and September 14.

The third option that the government resorts to is the import onions. This does not bring immediate consumer relief because imports carried out through government institutions take time. Even after onions have been imported, there is trouble is storing, distributing and selling them, because government institutions involved in this process, really don’t have the expertise for it. Also, in the past, the taste of imported onions hasn’t really gone down well with the Indian consumers.

So, what’s the way out of this mess? Let’s take a look at this pointwise.

1) The ECA is a remanent of an era when India had genuine food shortage. The idea was to restrict activities of some agents who were indulging in black marketing and hoarding at that point of time.

As a July 2018 report titled Review of Agricultural Policies in India published by the Organisation for Economic Co-operation and Development, points out: “Orders issued by the centre or the states regulate the production, storage, transport, distribution, disposal, acquisition, use or consumption of a commodity.”

While, we do have our share of problems with some food products where the price volatility is very high (pulses and onions in particular), the days of food shortage are long gone. Also, over the years, the fact that ECA exists has undermined investments in India’s agricultural supply chain infrastructure.

“ECA interferes with this mechanism by disincentivising investments in warehousing and storage facilities due to frequent and unpredictable imposition of stock limits. As stockholding limits apply to the entire agriculture supply chain, including wholesalers, food processing industries and retail food chains, the Act does not distinguish between firms that genuinely need to hold stocks owing to the nature of their operations, and firms that might speculatively hoard stocks.”

2) The lack of storage facilities adds to the price volatility of onions. As per a report titled A Report on the study of Onion Value Chain, published by the College of Agricultural Banking, Reserve Bank of India, 20-25% of onion production is lost due to post-harvest damages. This is because of the lack of storage infrastructure.

As the report points out:

What this means that as of 2018, there was a need to create onion storage structures of additional 14 lakh tonnes, just in Maharashtra. Both the ECA and the lack of bank finance come in the way.

3) The ECA also leads to a situation where traders aren’t able to store enough and this creates problems. Let’s take a look at what happened last year. The ECA was invoked in end September. The onion inflation in the coming months just went through the roof (you can take a look at the inflation charts earlier). The stock limits basically ensured that traders couldn’t store onions beyond a point.

As the Economic Survey pointed out:

“Most of the kharif crop, which itself was lower, would have had to be offloaded in the market in October itself [thanks to the stock limits under the ECA]. Absent government intervention through ECA, traders would store a part of their produce to ensure smooth availability of a product at stable prices throughout the year.”

4) The government also resorts to export bans or increases the minimum export price of onions (where you can still export as long as the customer at the other end is ready to pay the higher price). The idea as mentioned earlier is to increase the supply in the domestic market.

In 2018-19, India exported around 22 lakh tonnes of the onions it produced. This was worth around $500 million. The total onion production during the year had stood at 228.2 lakh tonnes. Hence, less than 10% of the onion produced was exported. Also, the value of onion exports isn’t very big in the overall scheme of things.

As per a FICCI document, India’s export policy towards onions was changed 14 times between 2014 and 2019. This does no good to India’s image globally on the export policy front. It makes us look terribly unreliable.

Also, while prices in the Lasalgaon market fell on September 15, a day after the export ban, they have risen since then, and on September 23, the modal price of onion stood at Rs 3,600 per tonne. So much for the policy benefiting the consumer.

So where does all this leave us? The government has removed onions from the list of essential commodities in the hope that it leads to the development of storage infrastructure.

The move is also expected to increase the income of farmers. 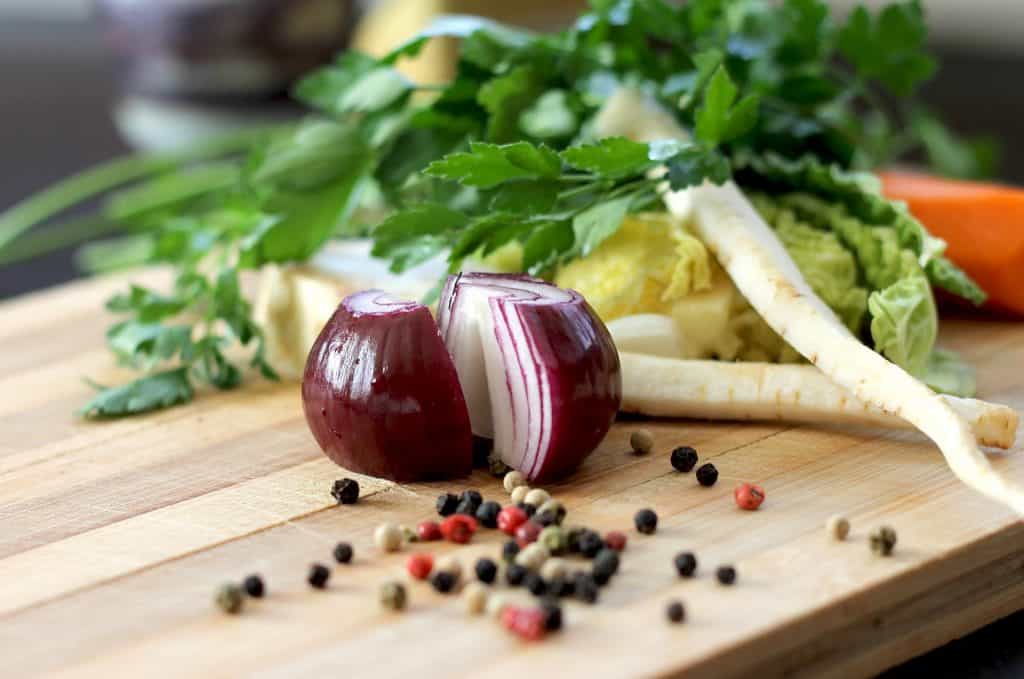 The question is will this work out in the way the government is projecting it to be? Let’s look at this pointwise.

1) While, the government has removed onion from the list of essential commodities, its export continues to be banned. So, what kind of signal is being sent out to anyone who is interested in building agriculture infrastructure, including onion storage?

2) Even though onion is no longer a part of essential commodities, the government can still intervene, under extraordinary circumstances like war, famine, extraordinary price rise and a natural calamity of grave nature.

How is extraordinary price rise defined as?

In the last three years, retail onion inflation has been more than 100% in eight months. Clearly, there is a good chance of high onion inflation in the time to come, given that any onion storage infrastructure isn’t going to be built overnight. Will the government intervene? Or will it sit tight and let the end-consumer pay?

The larger point here is that what the government does on this front in the time to come will determine how many entrepreneurs get interested in building agricultural infrastructure.

Just because onion is out of the essential commodities list doesn’t mean that the government cannot intervene. Any prospective entrepreneurs will like to see more evidence on this front.

3) There is great fear (as has been the case with the two main Farm Bills) of big business taking over. The question is if private enterprise is not allowed to operate in this sector, then what’s the way out? The government doesn’t have the money or the wherewithal to do much here. Central planning has been failure the world over and that it is a failure here as well, isn’t surprising.

Big business has built a lot of things since 1991, which most of us use and enjoy. Of course, along the way there has been crony capitalism as well. And that’s the fear here in the minds of people as well. (I don’t have a clear answer for this and I am saying so).

To conclude, taking onion out of the essential commodities list is just the first step. Many other things need to be done before the consumer can pay the right price and the farmer can get the right price.

In an ideal world, these are things that should have started in May 2014, when Narendra Modi was elected the prime minister for the first time. It would have been best to carry out small experiments in states and see how they go, before a nationwide plan was unleashed. There is always a gap between theory and practice and it’s best to correct that gap at a smaller level.

I would like to thank Chintan Patel for research assistance.