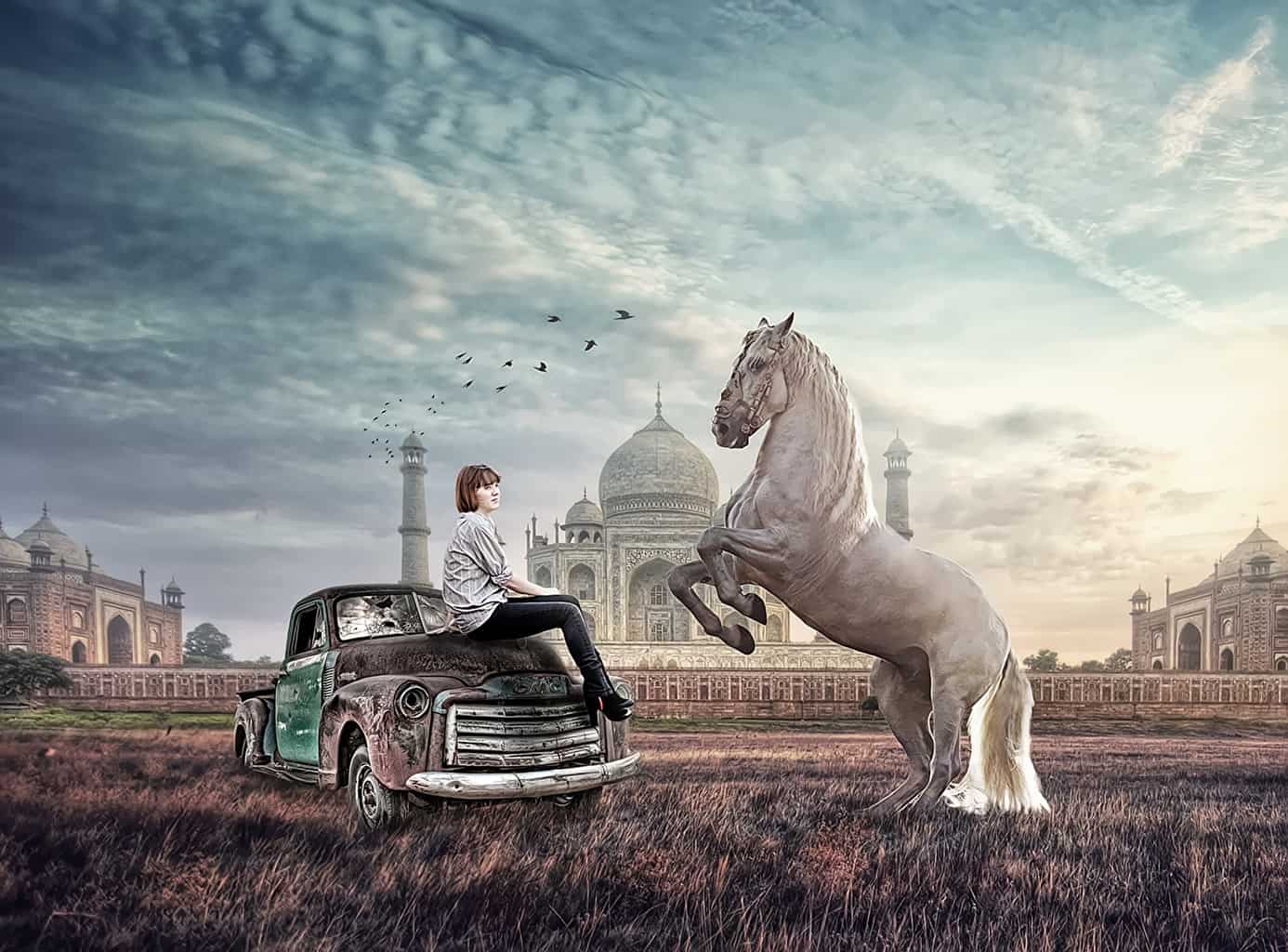 Yesterday morning, there was a news flash that the carmaker Toyota does not want to expand any further in India.

The company later released a statement saying: “Toyota Kirloskar Motor would like to state that we continue to be committed to the Indian market and our operations in the country is an integral part of our global strategy.” General Motors quit India in 2017.

In 2019, Ford Motor Company agreed to move a bulk of its assets into a joint venture with Mahindra and Mahindra. Whether Toyota wants to expand in India or not remains to be seen, but this sort of prompted me to look at car sales data over the years and it makes for a very interesting read. 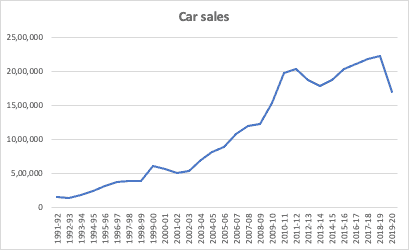 Irrespective of whether Toyota is leaving India or not it is safe to say that car sales haven’t been going up much in the last ten years or more. In fact, if we look at data a little more minutely, things get more interesting. 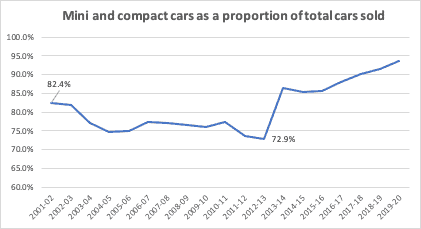 In 2001-02, mini and compact cars formed 82.4% of cars sold. It fell to a low of 72.9% in 2012-13. It has largely risen since and in 2019-20 reached a high of 93.7%. The point being that over the years a greater proportion of car buyers have bought value for money cars, making it difficult for many foreign car companies, given that this end of the market is dominated by Maruti Suzuki and Hyundai.

In the last five years, the sales of cars of up to 4,000 mm in length has simply gone through the roof. This is a function of the fact that the economic growth and the income growth have both stagnated in comparison to the past. Take a look at the following chart, which plots the increase in per capita income over the years in nominal terms.

Show Me the Money 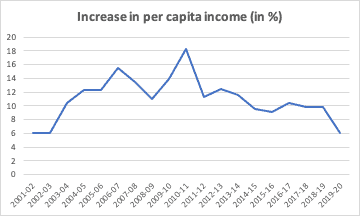 The per capita income growth has fallen over the years and that is reflected in the kind of cars people buy. There is a straightforward connect between the second chart and the third chart. Car sales have gone up at a fast pace whenever there has been a consistent double-digit growth in income. Between 2014-15 and 2019-20, the per capita income has consistently grown in single digits, except in 2016-17, when it grew at 10.4%. This reflects in the car sales as well.

This slowdown in income growth indicates an economy which has slowed down majorly over the last few years. And this shows in the slow growth in car sales.

Of course, this is not the only reason for slow growth in car sales. There is also the problem of higher taxes. And Viswanathan of Toyota is not the only one who thinks so.

As RC Bhargava, the current chairman of Maruti Suzuki, India’s largest carmaker, and the grand old man of India’s car industry, puts it in his new book Getting Competitive—A Practitioner’s Guide for India:

“In India cars have always been considered a luxury product and taxed accordingly till the present… [this] despite being one of the few globally competitive industries. Both the Central and state governments levy taxes and the total is 2–3 times the tax in the developed countries.”

Of course, these taxes make cars expensive and that leads to lower sales growth. The car industry has tremendous multiplier effect on the overall economy. As Bhargava puts it:

“It generates high volumes of employment and leads to the development of many technologies and industries whose products are used in the manufacture of cars. These include steel, aluminium, copper, glass, fabrics, electronics and electricals, rubber and plastics.”

Hence, lowering taxes on the automobile sector in particular (something I have written about in the past) and on cars in particular, will work well for the economy. It might lead to lower per unit tax collections for the government, but the increase in sales volume should gradually make up for this.

Also, as I explain here, an expansion in manufacturing creates many services jobs as well. But for all that to happen taxes need to come down. Nevertheless, as Viswanathan told Bloomberg: “You’d think the auto sector is making drugs or liquor.”