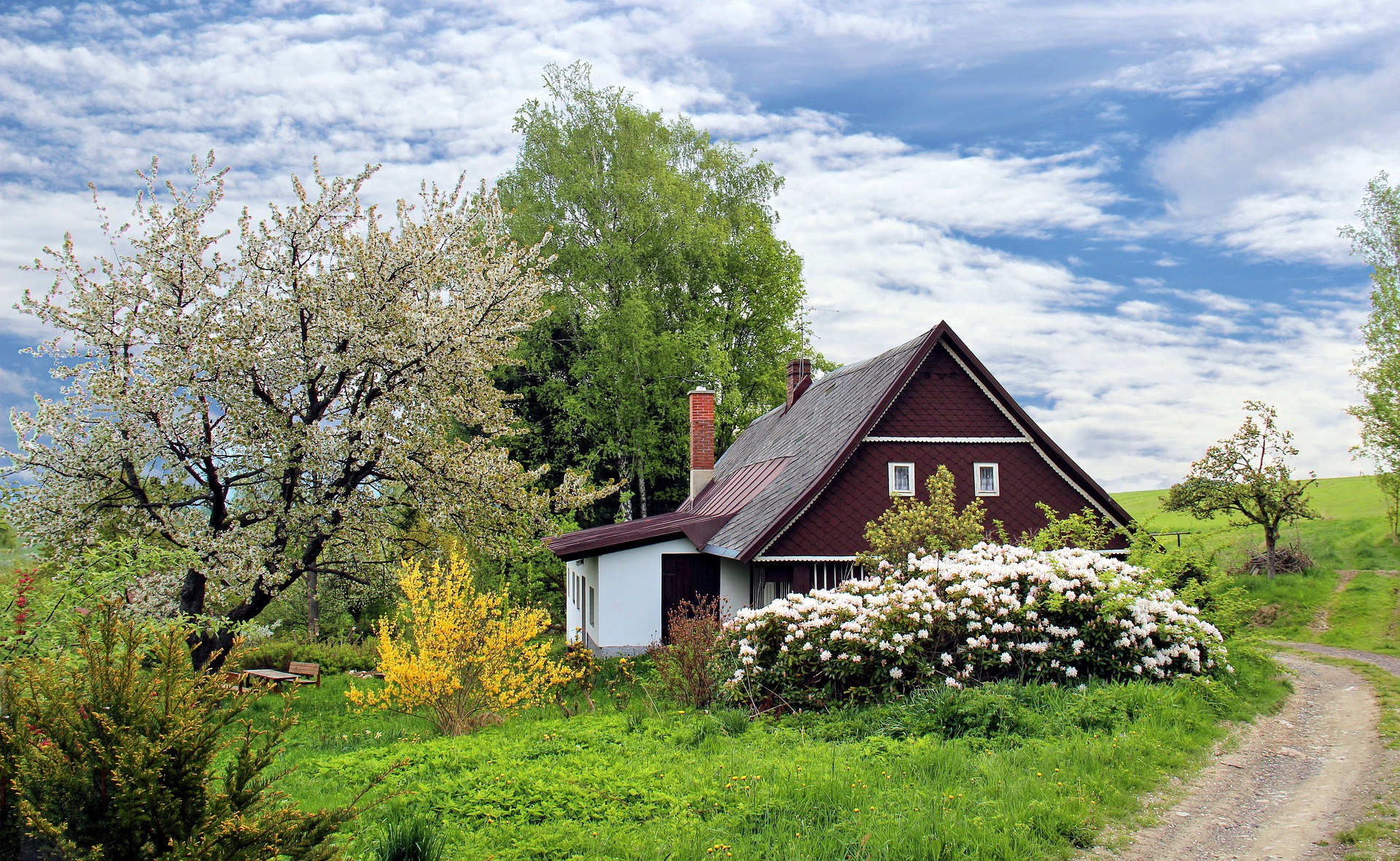 Before I start writing this, I have a confession to make. I have written about this issue before, around five years back. But given that things haven’t really changed since then, it is a good time to write about it again. Hence, to all my regular readers who have been following me over the years and might have read this earlier, sincere apologies in advance.

Home loans in India are given by two kinds of institutions – banks and housing finance companies (HFCs). Among the HFCs, Housing Development Finance Corporation (HDFC) has been a pioneer in the area of home loans.

The company regularly publishes an investor presentation along with every quarterly result.

I am not sure for how long the company has been doing this, but its website has these presentations going as far back as March 2013, a little over seven years. Since then, the company has had a slide in its investor presentation which talks about the improved affordability of owning a home in India. Usually, it is the eight or the ninth slide in the presentation (sometimes, but very rarely tenth).

This is the slide in the latest presentation for the period April to June 2020. 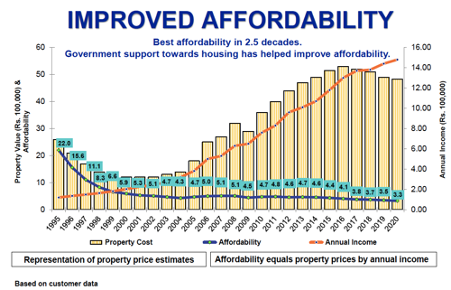 Let’s look at the chart between 2000 and 2020, the last two decades. The home loan market in the country before that was too small and evolving and hence, prone to extreme results. So, it makes sense to ignore that data.

What does the chart tell us? It tells us that affordability of homes in the country has gone up over the years. The chart defines affordability as home price divided by the annual income of the individual buying the home.

As can be seen from the chart, the affordability factor at 3.3 is the lowest in twenty years. Hence, affordability of homes has gone up. QED.

The trouble is, this goes totally against what we see, hear and feel all around us. Real estate companies have lakhs of unsold homes with absolutely no takers. They have thousands of crore of unpaid loans. The banks and non-banking finance companies (NBFCs) have restructured these loans over the years and not recognized them as bad loans in the process, with more than a little help from the Reserve Bank of India (RBI). Bad loans are loans which haven’t been repaid for a period of 90 days or more.

Further, investors who bought real estate over the years have been finding it difficult to sell it. Indeed, if homes had become more affordable, this wouldn’t have been the case. Real estate companies would have been able to sell homes and repay the loans they have taken from banks and NBFCs. And the RBI wouldn’t have to intervene.

So, what is it that HDFC can see that we can’t? Before I get around to answering this question, let me tell you a little story. During the Second World War, the British Royal Air Force (RAF) had a peculiar problem.

It wanted to attach heavy plating to its airplanes in order to protect them from gunfire from the German anti-aircraft guns as well as fighter planes. The trouble was that these plates were heavy and hence, had to be attached strategically at points where bullets fired by the German guns were most likely to hit. The British couldn’t plate the entire plane or even large parts of it.

The good part was that they had historical data regarding which parts of the plane did the German bullets actually hit. And this is where things got interesting. As Jordan Ellenberg writes in How Not to Be Wrong: The Hidden Maths of Everyday Life: “The damage [of the bullets] wasn’t uniformly distributed across the aircraft. There were more bullet holes in the fuselage, not so many in the engines.”

So, historical data was available and hence, the decision should have turned out to be a very easy one. The plates needed to be attached around the plane’s fuselage. But this logic was missing something very basic. The German bullets should have been hitting the engines of airplanes more regularly than the historical evidence suggested, simply because the engine “is a point of total vulnerability”.

A statistician named Abraham Wald realised where the problem was. As Ellenberg writes: “The armour, said Wald, doesn’t go where bullet holes are. It goes where bullet holes aren’t: on the engines. Wald’s insight was simply to ask: where are the missing holes? The ones that would have been all over the engine casing, if the damage had been spread equally all over the plane. The missing bullet holes were on the missing planes. The reason planes were coming back with fewer hits to the engine is that planes that got hit in the engine weren’t coming back.” They simply crashed.

This is what is called survivorship bias or the data that remains and then we make a decision based on it.

As Gary Smith writes in Standard Deviations: Flawed Assumptions Tortured Data and Other Ways to Lie With Statistics: “Wald…had the insight to recognize that these data suffered from survivor bias…Instead of reinforcing the locations with the most holes, they should reinforce the locations with no holes.”

Wald’s recommendations were implemented and ended up saving many planes which would have otherwise gone down. (On a different note, both the books from which I have quoted above, are excellent books on how not to use data, especially useful if you are in the business of torturing data to make it say what you want ).

If you are still scratching your head and wondering what does this Second World War story have to do with HDFC finding homes more affordable, allow me to explain. Like the British before Wald came in with his explanation, HDFC is also looking at the data it has and not the overall data.

Look at the left-hand of the corner of the chart, it says based on customer data. The analysis is based on HDFC’s own historical customer data. When HDFC talks about an average home price of Rs 50 lakh and an income of Rs 15 lakh, it is basically talking about the set of people who have approached the HFC for a loan and gotten one. Hence, HDFC’s conclusion of better affordability is drawn from the sample it has access to.

But does this really mean that affordability has improved? Or does it mean that the quality of HDFC’s customers has improved over the years? The customers that HDFC is giving a home loan to are ones who can afford to buy homes. The HFC clearly has no idea about people who want to buy homes but simply do not have the financial resources to do so.

They don’t show up as a part of any sample, hence, the evidence on them is at best anecdotal. These people are like planes whose engines were hit and hence, they did not make it back to their base, in the Second World War. And like there was no data on the planes which got hit and didn’t make it back, there is no data on these people as well. Basically, HDFC’s data and conclusion are victims of the survivorship bias

In fact, HDFC’s investor presentation has always carried another interesting slide on low penetration of home loans in India. The following chart is from the latest presentation.

Home loans as a percentage of GDP 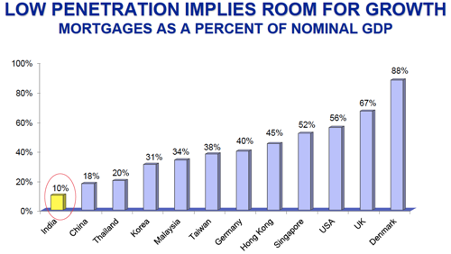 To conclude, it’s time that HDFC remove this misleading slide from its investor presentation or at least say that the affordability has improved for its customers and not for the country as a whole.