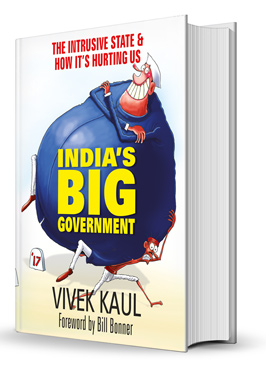 Self-employment is the new buzzword in the Narendra Modi government. And it is going to rescue the one million youth that are entering the workforce every month. Or at least that is what we are being told.

The thing is that there is nothing new in this. Self-employment may have become the new buzzword with ministers of the Narendra Modi government, but it has been around for a while.

As the report titled Ease of Doing Business: An Enterprise Survey of Indian States: “A major challenge in India has been the preponderance of employment in very small enterprises. Formal sector jobs that exhibit high productivity and pay high wages are limited. According to the latest Economic Census, conducted during 2013 and the first quarter of 2014, of 131 million workers in industry and services, 44.4% were employed in Own Account Enterprises (OAE), which are managed exclusively by their owners and do not employ a single regular worker. Establishments with five or fewer workers, including the OAE, employed 69.5% workers and those with nine or fewer workers employed 79% workers. In other words, establishments with 10 or more workers employed just 21% of the workers in industry and services.”

The above paragraph says multiple things. Let’s look at them one by one.

In the recent past, the informal sector has been declared to be a bad thing because it does not pay its share of taxes. The question is, does it really need to pay taxes? The own-account enterprises form a large part of this sector. And people running these firms, clearly do not make enough money to be paying taxes. Take a look at Table 1.

Table 1: Self Employed/Regular wage salaried/Contract/Casual Workers according to
Average Monthly Earnings (in %) All India

Table 1 clearly shows that 96 per cent of the self-employed make up to Rs 2,40,000 a year. Income up to Rs 2,50,000 per year does not come under tax bracket. This basically means that a large section of the informal sector in India simply does not pay tax because it does not earn enough to pay tax.

As economist Jim Walker of Asianomics wrote in a research note sometime back: “There is nothing intrinsic that says that the informal economy is a less effective or beneficial source of activity than the formal economy.” This is something that the Modi government needs to understand.

In its quest for more taxes, it is working towards destroying large parts of the informal economy, which is a huge part of Indian economy.

Yes, self-employment is important. But then the government is saying one thing and doing exactly the opposite thing. What explains this dichotomy?

The column originally appeared in Equitymaster on October 23, 2017.