The prime minister Narendra Modi in a speech yesterday assured the nation that All is Well with the Indian economy, and that there was no reason to worry.

He offered data to sell his argument. Let’s go through some of the data that he offered and see what he told us and more importantly what he did not.

1) The fiscal deficit of the government has fallen from 4.5 per cent of the gross domestic product (GDP) in 2013-2014, when Manmohan Singh was prime minister, to 3.5 per cent in 2016-2017. Fiscal deficit is the difference between what a government earns and what it spends.

Yes, the fiscal deficit has come down. A major reason for this is the fall in oil prices, since Modi took over as prime minister. On May 26, 2014, the day Modi was sworn in as prime minister, the price of Indian basket of crude had stood at $108.1 per barrel. As of October 4, 2017, the price was at $55 per barrel, having fallen to even lower levels during the period.

Oil prices go up and down due to a whole host of reasons and Modi’s government has almost no role to play in it.

The central government has captured much of this fall in price of oil, by increasing the excise duties on petrol and diesel, thereby increasing its earnings, and thereby bringing down the fiscal deficit. As they say, there is a difference between making things simple and making them simplistic.

2) Prime Minister Modi also claimed in his speech that the current account deficit has improved from -1.7 per cent of the GDP in 2013-2014 to -0.7 per cent of the GDP in 2016-2017. The current account deficit is the difference between total value of imports and the sum of the total value of its exports and net foreign remittances. Or to put it in simpler terms, it is the difference between outflow (through imports) and inflow (through exports and foreign remittances) of foreign exchange.

Again, this has primarily been account of fall in the price of oil and thus a fall in the total amount of dollars that India pays for importing oil. India imports around 80 per cent of the oil that it consumes. Hence, Modi’s government has had very little role to play in the fall of the current account deficit.

It further needs to be pointed out that imports are a negative entry in the GDP calculation. So, if imports fall, the GDP rises automatically, assuming everything else stays the same. Falling oil imports are a big reason for the pick-up in the GDP growth, during Modi’s tenure as prime minister.

3) Take a look at the following chart, which was a part of the prime minister’s presentation yesterday. 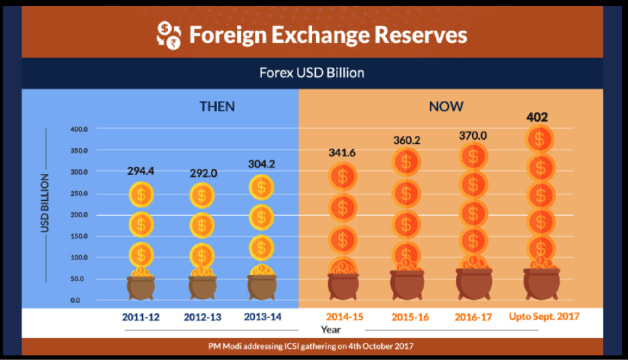 As per this chart, the total foreign exchange reserves have risen by close to $ 60 billion during the period that Modi has been prime minister. In contrast, they were more or less flat when Manmohan Singh was the prime minister. At least that is what the above chart suggests.

Hence, foreign exchange reserves accumulated at a much faster rate during Manmohan Singh’s tenure as prime minister. Of course, a bulk of these gains came during the first five years of the tenure, when the forex reserves increased at the rate of 17.4 per cent per year. Between 2009 and 2014, when the Congress led UPA made a mess of the economy, the increase in foreign exchange slowed down dramatically to 3.8 per cent per year on an average.

Basically, who did well, Singh or Modi, on the foreign exchange front, depends on where we start measuring from.

It is important to remember here that the government has had to borrow lesser because it has increased excise duty on petrol and diesel and captured the bulk of the gain of falling oil prices.

The thing is there is no free lunch in economics. The collapse in food prices led to farmers demanding a waiving off agriculture loans and that has happened in state after state. It is ultimately expected to cost the nation, in the form of state governments compensating banks, more than Rs 2 lakh crore.

6) Over and above this, the prime minister shared data on a few consumption data points. Car sales, two-wheeler sales and tractor sales have improved, since June, hence, all is well.

What the prime minister did not tell us is the rapid rise in non-oil non-gold non-silver imports, post demonetisation. Take a look at the following chart. 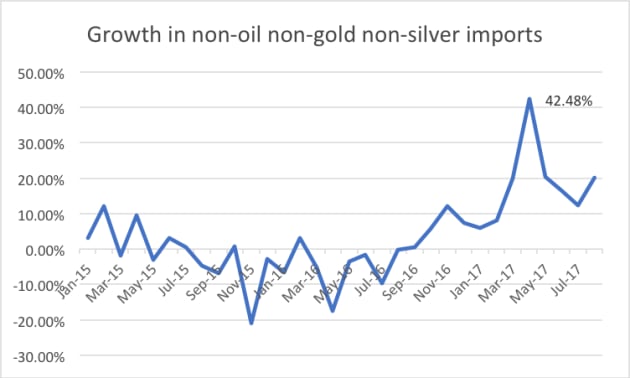 Source: Ministry of Commerce and Industry.

Hence, if we remove the imports of oil, gold and silver, from the total imports number (in dollars), what remains (i.e. non-oil non-gold non-silver imports) is a good indicator of consumer demand.

The above chart tells us that non-oil non-gold non-silver imports have grown at an extremely fast rate after October 2016. They are growing at rates at which they haven’t grown for a couple of years. What is happening here?

This is clearly visible in the huge growth of non-oil non-gold non-silver imports. What this also means is that as demonetisation destroyed supply chains in India, it also led to a huge job destruction. If goods weren’t moving, there was no point in producing them either. This meant shutdown of firms and massive job losses.

Further, by importing stuff that we used to produce in India earlier, we have helped the manufacturing business in foreign countries and in the process “possibly” helped create jobs there.

a) During the course of this financial year between April and August 2017, the total outstanding loans of banks (non-food credit) have shrunk. Only retail loans are growing, loans to industry, agriculture and services have shrunk. This, even though interest rates have fallen. What this clearly tells us is that a large section of the economy is not in a good shape and in no mood to borrow money and that is not a good thing.

b) As on March 31, 2017, 22 out of 27 public sector banks had a bad loans ratio of 10 per cent or more. This basically means that out of every Rs 100 of loans given by these banks, Rs 10 or more of loans had gone bad and weren’t being repaid.
In fact, five banks had a bad loans rate more than 20 per cent, which basically means that more than one-fifth of the loans given by these banks had gone bad and were not being repaid.
This is a problem that has only grown during Modi’s tenure. He and his government have sat on it, and only blamed the previous government for the mess.

c) All the so-called attack on black money has had a very limited impact on the price of real estate. While prices haven’t risen, they haven’t fallen either. This essentially means that homes continue to remain unaffordable for most people.

d) There has been almost no talk on how demonetisation and now the badly implemented GST have played havoc with the functioning and the existence of small and medium enterprises. If small and medium enterprises keep getting destroyed how is the country ever going to create jobs. It is worth remembering here that one million Indians are entering the workforce every year. Where are the jobs for these people?

e) Our primary education system continues to remain in a mess, with most children finding it difficult to read, write and do basic maths. It has been more than 40 months since Modi was elected prime minister, and nothing serious has been done on this front.

I can go and on the bad state of the Indian economy, but there is only so much time and only so much space. The trouble with trying to be clever all the time is that ultimately you get found out and more importantly, the nation doesn’t go anywhere.

The first step towards solving a problem is recognising that it exists. The economy has a problem, it is time that the government acknowledged that and worked towards it.

The column originally appeared on Huffington Post on October 5, 2017.