At the end of every month the Controller General of Accounts (CGA) declares the fiscal deficit of the government, up until the previous month of the financial year. Fiscal deficit is the difference between what a government earns and what it spends. 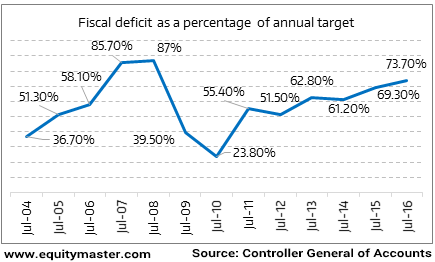 Another point that needs to be mentioned here is that expenditure of the government is front loaded whereas a major chunk of its revenues start to come in only in the second half of the year. Even with this disclaimer, the fiscal deficit for the first four months of this financial year is worrying, given that one of the biggest expenditure items of the year, the extra salaries and pensions that the government needs to pay to its current and former employees after accepting the recommendations of the Seventh Pay Commission, kicks in only from August 2016.

For the three-month period between April to June 2016, the government expenditure went up by 18.8 per cent (in real terms). This helped the GDP grow by 7.1 per cent. Without this push from the government, the growth would have been much slower at 5.7 per cent, as per Nomura.

The trouble is that the government doesn’t have an unlimited amount of money and if it is spending money without earning it first, it’s bound to push up its fiscal deficit. A higher fiscal deficit comes with its own set of problems, from higher inflation to higher interest rates.

Further, if the government wants to achieve the fiscal deficit target of 3.5 per cent of the GDP, that it set at the time of presenting the budget, it will have to be a little more aggressive about raising its revenues.

Take the case of the disinvestment target for 2016-2017. It has been set at Rs 56,500 crore. The way it has worked in the previous years is that the government has waited all through the year for the stock market sentiment to improve. And then towards the end of the year, the Life Insurance Corporation of India, has been encouraged to buy what the government has had to sell.

In 2015-2016, of the disinvestment target of Rs 69,500 crore, only around Rs 25,312.6 crore was earned. Of this amount, a major chunk came from the Life Insurance Corporation of India. From the looks of it, something similar may happen this year as well. The Life Insurance Corporation picking up shares being sold by the government is hardly genuine disinvestment, with the money moving from one arm of the government to another.

It is worth pointing out here that timing the market by trying to sell when the stock market is peaking, is very difficult to achieve. And the same applies to the government as well. An ideal strategy would be sell the government stake in companies, little by little almost every month. This wait for the market to pick up is not the best way to operate. The moment any disinvestment of shares stops being an event, will be the day, this strategy will really take off.

Further, given its ambitions in the infrastructure sector, the Modi government needs to look at newer ways of raising revenue. One such way is by selling land. As the Economic Survey of 2015-2016 points out: “Most public sector firms occupy relatively large tracts of land in desirable locations. Parts of this land can be converted into land banks.”

These land banks can then be sold in order to raise revenues for the government. This money can go into a sort of an infrastructure fund which can be used to finance the ambitious plans of the government when it comes to roads and railways.

Of course, for this to happen, the reluctance of the bureaucrats to sell land has to be overcome. This reluctance, the Economic Survey comes in large part from the “the fear of ‘causing pecuniary gain’ to the other side.” And this fear will not be so easy to get rid of.

(The column originally appeared in Vivek Kaul’s Diary on September 6, 2016)