Trying to rent a house is one of the most nerve wracking experiences one can go through. I have gone through it in three different cities (Mumbai, Pune and Hyderabad). The way the landlords look at you with pity, is a scene straight out of the movies. It’s like their way of telling you, what you haven’t even been able to buy a house? You loser, look at me.

Having found a house and then trying to handle the landlord on a regular basis takes your diplomatic skills to another level (I used to have a landlord once who used to land up every Saturday morning asking for stock tips and then spend a good three hours badgering me for them).

The entire system is built against anyone who wants to live in a rented accommodation or cannot afford to buy a home unless he moves so far away from the city (I am talking about the bigger metropolitan cities here) that the rest of his life is spent commuting to and from office.

The interesting thing is that the rental share of urban housing stock has gone down over the decades. As per the 1961 census it was at 54 per cent and by 2011 it had fallen to 27.5 per cent. This explains why finding a house on rent can be such a pain.

The proportion of homes on rent has fallen dramatically over the years. This, as urbanisation (or the number of people living in cities) has gone up. As per the 2011 census 31.2 per cent of the population lived in urban areas. This figure is expected to go up in the years to come. 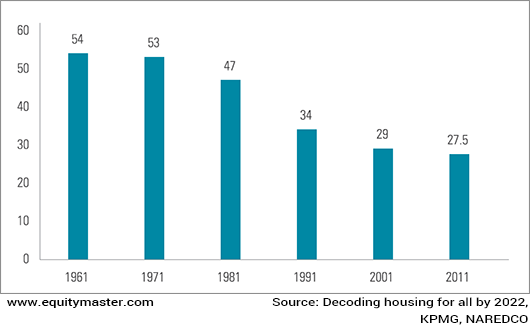 The fall in rental housing stock is a worrying trend. A major reason for this has been the rent control acts which are in operation in various cities across India. As KPMG points out in a research note titled Decoding housing for all by 2022: “Rent control policies aimed at protecting tenants have had their consequences of deterring investments in rental housing in India, causing the share of rental stock to decline from 54 per cent in 1961 to 27.5 per cent in 2011 which drove EWS/LIG households into slums.” (EWS = economically weaker sections. LIG = lower income groups).

In fact, as the Tenth Five Year Plan Document (2002-2007) points out: “The Rent Control Act, in fact, is the single most important reason for the proliferation of slums in India by creating a serious shortage of affordable housing for the low income families. Low and middle-income families typically live in rented accommodation all over the world and the need for such accommodation in our cities will only increase as the economy modernises, labour mobility increases and urbanisation takes place.” Further, India’s urban rental housing stock is low as per global standard.

The rent control acts lead to a shortage in rental housing in various ways. As the Five Year Plan document points out, it leads to: “Negative effect on investment in housing for rental purposes. • Withdrawal of existing housing stock from the rental market. • Accelerated deterioration of the physical condition of the housing stock.”

Another impact of rent control is to give Indian cities a shabbier look in comparison to cities in other developing countries. With the tenants living under rent control, the landlord has no incentive in renovating the buildings. Just one walk around South and Central Mumbai tells us that very clearly.

In fact, Mumbai has had to bear the brunt of the rent control act. As Sahil Gandhi, Vaidehi Tandel, Shirish Patel, Abhay Pethe, Kabir Agarwal and Sirus J. Libeiro point out in a working paper titled Decline of Rental Housing in India: A Case Study of Mumbai: “There has been near universal consensus that rent controls of the kind seen in Mumbai, known as “first generation rent control”, have a devastating impact on rental markets and, in general, housing and land markets in cities…Rent control in Mumbai has been particularly damaging for the housing market, which is characterized by ownership dwellings constructed mainly for the upper middle class on the one hand and a high incidence of slums housing the majority of the population on the other.”

The point is that if the government’s mission of “Housing For All by 2022” has to become a reality then rental housing needs to pick up in a big way. What is needed first and foremost for this dream to become a reality is a new rental law which is balanced “in favour of both the tenant and the land-lord could be drafted by the central government.” As KPMG points out: “A balanced rental law could help with the development of a formal rental market in India, and to some extent improve occupancy of the unoccupied houses estimated at about two crore.”

A new rental law put out by the central government will be the starting point. It will then have to be adopted by the state governments. At least that way some of the locked and unoccupied homes will start hitting the market.

But will that lead to Housing for All by 2022? Only a little. The shortage in housing is at the lower end of the spectrum, as can be seen from the following table. 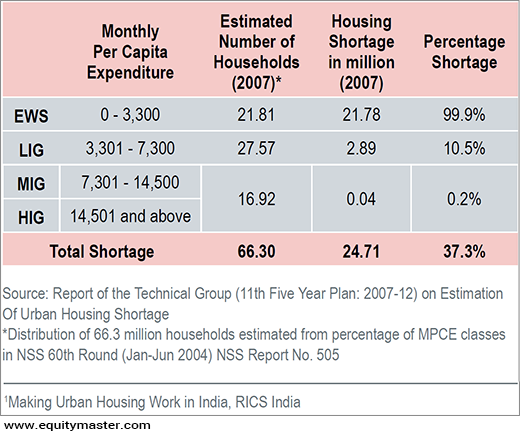 The unoccupied homes are more at the upper end.

These will be the first few steps towards Housing For All By 2022.

The column originally appeared in Vivek Kaul’s Diary on Equitymaster on August 31, 2016