Take a look at the following chart. It shows the various kinds of savings that made up for household financial savings in 2013-2014 (the latest data that is available on this front). 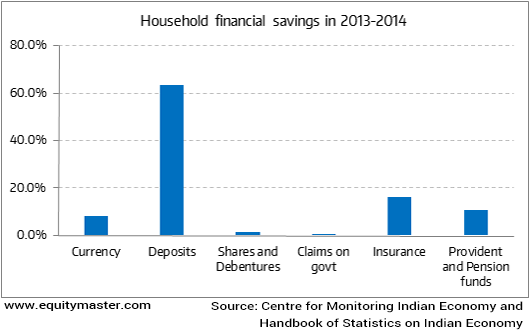 What this tells us very clearly is that the Indian financial media spends a disproportionate amount of time and space, discussing stocks, debentures and mutual funds. A very small segment of India’s population actually invests in them. This also largely explains why the pink newspapers in India, have such small circulation numbers, given that most of the stuff they publish remains irrelevant to a large section of the population.

The statutory liquidity ratio as this ratio is referred to as is currently at 21 per cent. Hence, for every Rs 100 raised as deposits, banks need to invest at least Rs 21 in government bonds. As on August 5, 2016, 29.3 per cent of aggregate deposits of banks were invested in government bonds.

With so much money chasing government bonds, it allows the union government to raise money at a lower rate of interest than would have been the case, if it was not compulsory for banks to invest in government securities.

Over and above the banks, the provident funds as well as the insurance companies also need to compulsorily buy government bonds. This allows the government to raise money at lower interest rates, than would have otherwise been the case.

Further, given that deposits are the main form of savings, it is this money invested by deposit holders with banks, that ultimately finds its way into the lending carried out by banks. It finances almost everything from homes to cars to two-wheelers to credit card spending to infrastructure projects to corporate takeovers.

But for all that they do as a whole, the deposit holders don’t get treated well. In fact, rarely do they even get a rate of interest on their deposits, which is higher than the rate of inflation. Take a look at the following chart. 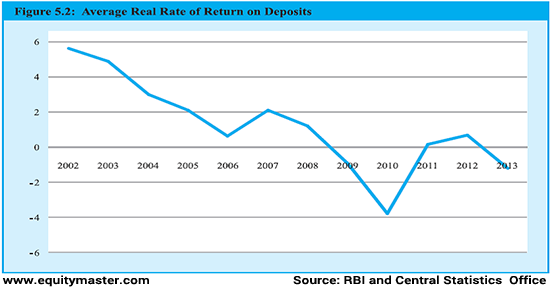 One of the ironies of the Indian tax system is that income that is earned as capital gains is either not taxed at all, or taxed at lower rates, than income which is earned as an interest on a fixed deposit. Further, capital gains made on selling a house or a debt mutual fund are even allowed the benefit of indexation. The question is why are fixed deposit investors not allowed the benefit of indexation as well, while paying taxes?

Indexation basically allows to take inflation into account while calculating the price of acquisition of an asset. This essentially ensures that the capital gains come down. And in the process, so does the tax that needs to be paid on the capital gains.

Such benefits are not available to those who invest in fixed deposits. If all this was not enough, politicians and bureaucrats keep talking about the need for lower interest rates all the time. This is something I discussed in yesterday’s column, where the commerce and industry minister, Nirmala Sitharaman, had talked about the need to lower interest rates by 200 basis-points to help the micro, small and medium enterprises(MSME) sector.

The finance minister Arun Jaitley has in the past on multiple occasions talked about the need for lower interest rates on fixed deposits. In fact, sometime back, Jaitley even said that people should be investing their money in mutual funds, bonds and shares, that finance projects and lead to economic activity. As if fixed deposits do not finance economic activity. For the finance minister of the nation to be saying something as remarkably silly as this, is surprising indeed.

Also, fixed deposits need to offer a real rate of return. One reason for this is that they are used by senior citizens to generate a regular income. In a country, where there is very little social security on offer along with the fact there is almost no specialised care for the elderly and a medical system which basically robs everyone, the least that we can do is to ensure that the interest on fixed deposits is higher than the rate of inflation. Also, as I keep saying deposits are also used to build a corpus for retirement and weddings and education of children.

Given the reasons cited above, it is important that the government treated the deposit investors with some respect and not make them the fall guy, all the time.

The column originally appeared in Vivek Kaul’s Diary on August 26, 2016