Hence, over a two-year period the price of pulses has risen by around 53.4%. This is as per the consumer price index, the rise in price at the actual retail level might be more. The only other items that saw double digit inflation, over the last one year, were vegetables and sugar.

Of course, this rise in price must have upset the monthly budget of many homemakers. Nevertheless, the rise in price of pulses is not something new. It is now a part of our lives. The question is why is this happening?

In the budget speech made in February, earlier this year, the finance minister Arun Jaitley had said that: “Monitoring of prices of essential commodities is a key element of good governance. A number of measures have been taken to deal with the problem of abrupt increase in prices of pulses.
has approved creation of buffer stock of pulses through procurement at Minimum Support Price and at market price through Price Stabilisation Fund.”

On the face of it, this sounds a sensible thing to do. Up until February, the government maintained buffer stocks for rice and wheat. The idea was that it could do the same for pulses as well. If prices went up, some of the buffer stock could be released in the market and prices be stabilised.

The trouble is what works with rice and wheat doesn’t necessarily work with pulses. With an assured procurement of rice and wheat by the government, India produces much more rice and wheat than it needs. As the Economic Survey of 2015-2016 points out: “It is increasingly clear that there is over-production of cereals, especially in some states. Reducing this over-production—a manifestation of this exit problem—is difficult.”

What is the trouble with the government procuring pulses as well? The dietary patterns as they evolve seem to favour increased protein and pulses are a major source of protein, in a country, where a significant portion of the population is vegetarian.

The failed monsoon over the last two years is the obvious explanation for this. Also, what does not help is that a major portion of pulses are produced in unirrigated areas unlike rice and wheat. As the Economic Survey points out: “The production pattern for pulses is very different from other crops. Not only is most of the land dedicated to growing pulses in each state unirrigated, but the national output of pulses comes predominantly from un-irrigated land. In contrast, a large share of output in wheat, rice and sugarcane – in Punjab, Haryana and UP – is from irrigated land.”

Hence, for a pulses production to increase a good monsoon is necessary. In this scenario of falling production of pulses, the government decision to build a buffer stock hasn’t really helped. In early March 2016, the ministry of agriculture told the Rajya Sabha that the government has decided to build a buffer stock of pulses amounting to 0.15 million tonnes. One third of the amount had already been procured.

This meant that the overall supply of pulses to the open market fell further, driving up prices. Given the huge gap between demand and supply, even a small fall in supply, can drive up prices.

The following table shows the total amount of pulses that have been imported over the years. 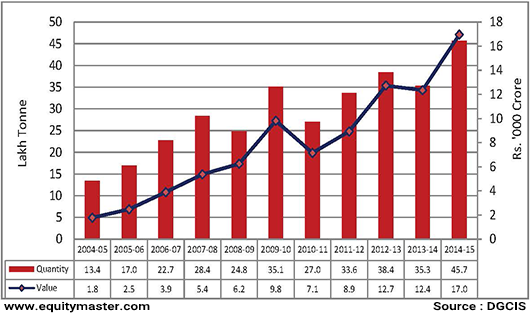 Myanmar remains a major source for import of pulses. But despite the imports, the prices of pulses continued to rise. As the report titled Price Policy for Kharif Crops—The Marketing Season of 2016-2017 points out: “India being the largest producer, consumer and importer of pulses in the world, its domestic demand-supply volatility has high impact on international trade.”

This means that Indian demand drives up prices in international markets. So, even if we are able to import pulses to meet demand, the prices continue to remain high. As the Economic Survey points out: “Given that India is the major producer and consumer of pulses, imports cannot be the main source for meeting domestic demand. Therefore, policy must incentivise movement of resources towards production of pulses.”

One reason why farmers do not like to grow pulses despite such high prices is that unlike rice, wheat and sugarcane, there are no steady buyers. This means that farmers have to sell their produce in private markets where they can get a price even lower than the MSP. And given this, lack of predictability about a price, farmers prefer to grow rice and wheat.

In an ideal world, the way out of this would be develop a proper agricultural market where market forces would do their work. But in India, what is likely to happen is that the government will procure more and more pulses, like rice and wheat, in the years to come.

As the report titled Price Policy for Kharif Crops—The Marketing Season of 2016-2017 points out: “The long-term measures include increasing productivity, bringing more area under pulses cultivation by diversifying from paddy and wheat alongside providing adequate facilities for assured procurement, creating buffer stock of pulses and their distribution through Public Distribution System (PDS).”

This is a bit of a chicken and egg story. As the government procures more pulses, the supply in the open market will fall, pushing up prices, until the government releases pulses into the open market. This is how things will operate, with spurts in prices of pulses, until enough farmers know about the fact that the government is procuring pulses as well, along with rice and wheat. This knowledge will then lead to more farmers cropping pulses and a gradual increase in production, in the years to come.

Also, the yields of pulses in India is very low in comparison to other countries. As the Economic Survey points out: “India has low yields comparable to most countries. On an average, countries like Brazil, Nigeria, and Myanmar have higher yields. Some states do much better than the all-India average, but even the key pulse producing state of Madhya Pradesh has yields (938 kg/ha) barely three-fifths that of China’s (1550 kg/ha).”

Price stabilisation of pulses also requires an improvement in the yields.

The column originally appeared in Vivek Kaul’s Diary on June 24, 2016