Last week, a portion of a flyover being built in an old part of Kolkata collapsed, killing 27 people. The flyover was being built by IVRCL.

The company reacted immediately to the tragedy. AGK Murthy, director (operations) of the company told The Hindu: “It is for the first time in the history of the company that such an incident has occurred. We are unable to comprehend at this stage what could have happened. It is beyond our thinking. It is like an act of god.”

An act of god is basically a legal term associated with events outside human control. Natural disasters like floods, earthquakes, cyclones etc., are a good example.

Hence, the question is can the collapse of the part of the flyover in Kolkata be called an act of god? The flyover clearly did not fall because of a natural disaster. Experts, who understand such things, are of the opinion that it was a design failure that caused the fall. Several experts told this to The Hindustan Times.

Also, much of the analysis on the issue in the media has missed out on the poor financials of IVRCL. The financial situation of the company has deteriorated considerably over the years. A few graphs that follow clearly show us that. 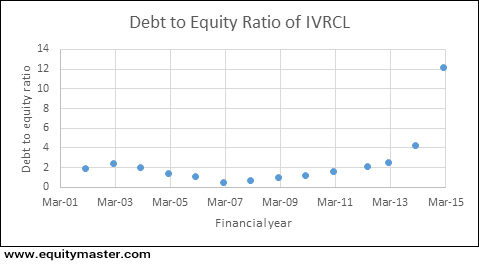 What does this mean? This means that the borrowings of the company were more than 12 times its capital (or its own money or the skin in the game) in the business. The ratio is extremely high. In the normal scheme of things, lower the debt to equity ratio of a company, the better it is placed from a risk perspective. Its chances of being able to continue to pay the interest on the debt are higher.

The question to ask is how did the company reach this stage?

A simple explanation for this lies in the fact that the company borrowed big-time to expand. But this expansion did not generate an adequate amount of sales. Take a look at the following chart. The sales of the company have fallen over the years. 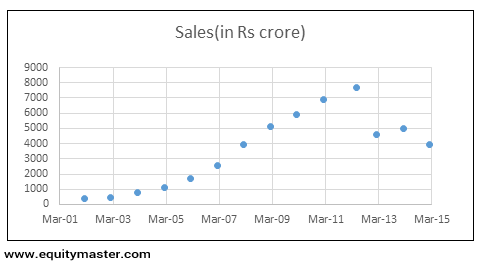 Now take a look at the following chart. The blue dots represent the sales of the company and the orange dots the total debt. As the debt of the company went up, the sales also went up, until they started falling. 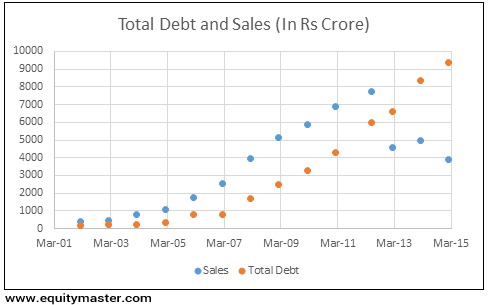 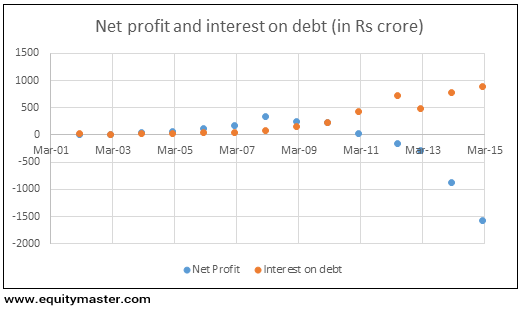 As the total borrowings of the company went up, its sales went down. The idea behind borrowing, should have been to expand the business of the company, so as to increase sales as well as profit. The increased sales would have then allowed the company to pay the higher interest on the debt. The higher profit would have added to the higher networth or shareholders’ equity.

But this is how things should have played out theoretically. The fact of the matter is that they did not. In fact, the losses made by the company over the last few years have been adjusted against the networth and the networth has come down dramatically during the period.

It also needs to be pointed out here that IVRCL, like many other companies, got carried away in the era of easy money that prevailed between 2002 and 2008, and ended up borrowing much more than it could perhaps be able to repay. 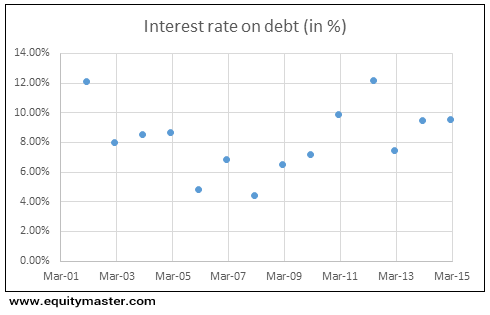 In fact, on this and other counts, many other corporates are facing a similar set of problems because of having borrowed too much during the go-go years.

It is worth asking here that how could a state government allow a company with a debt to equity ratio of 12:1 to continue building a flyover? Any company in such a scenario would be really tempted to compromise on quality, in order to ensure that it could push up its profits and if not that, at least limit its losses.

IVRCL has said that “all necessary processes and quality steps have been taken as per standard operating procedure”. This needs to properly investigated.

The column originally appeared on Vivek Kaul’s Diary on April 5, 2016