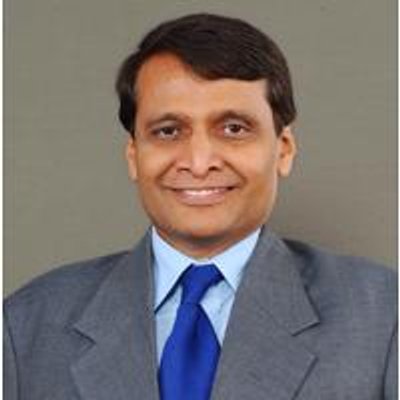 Suresh Prabhu, the minister of railways, presented the railways budget yesterday. During the course of the budget speech Prabhu said: “The freight basket of Indian Railways is dominated by 10 bulk commodities which enjoy a share of around 88%.”

The accompanying table shows the total amount of some of these commodities moved by the Railways along with the revenue earned during the course of the current financial year. What the table clearly tells us is that the projections that the railways minister made when he presented the last budget in February 2015, have turned out to be extremely overoptimistic.

This minor jump in freight movement led to earnings jump of 5.7% to Rs 1,11,853 crore. Prabhu had projected that the earnings will jump by 14.7% to Rs 1,21,423 crore. Given this, the earnings have fallen considerably short by around Rs 10,000 crore of what had been projected.

The jump in earnings primarily came from the fact that Prabhu had increased the freight rates for the movement of various commodities in his last budget. The freight rate for coal, which forms around half of the total freight that Indian Railways moves, was increased by 6.3%, and seems to have saved the day for the Railways. The rate for cement was increased by 2.7% and that of urea, pulses and grains by 10%.

The inability to meet the projected earnings could be possibly because of two reasons. First, there is the perpetual reason of the Indian Railways losing out to the road transport sector. As Prabhu said during the course of his speech: “Historically declining modal share of Indian Railways, which dropped from 62% in 1980 to 36% in 2012, is continuing to exert pressure on the institution.”

Further, as the White Paper released by the Indian Railways last year pointed out: “Railway expenditure as percentage of transport sector expenditure used to be about 56% in 7th Plan (1985-90). It has reduced to 30% in 11th Plan (2007-12). IR in last two decades has remained under-invested whereas the road sector has witnessed a surge in investments. The share of IR in overall GDP has been static at 1% and has, in fact, gone down to 0.9% in 2012-13.”

The difference is also because of the broader slowdown in economic growth. And if the Railways has not moved the total amount of commodities that it expected to, it means that there has been a considerable slowdown in industrial demand.

This is something I have written about it in the past. And the railway budget numbers, only provide more evidence of the same. The numbers along with the slow growth in passenger revenue (which I shall discuss later in this piece) also clearly tell us that the Indian economic growth cannot possibly be 7.6% during 2015-2016. If the freight revenues have gone up by a nominal 5.7%(not adjusted for inflation) there is no way, the economy can be growing at a real 7.6%(adjusted for inflation).

The basic problem here is that the freight trains are slow as well as expensive in comparison to road transport. In this scenario, the Railways has to be a little more dynamic in its handling of freight. As Prabhu said during the budget speech: “Indian Railways typically has focused on increasing revenues through tariff hikes. We want to change that and challenge our conventional thinking on freight policies to win back our share in the transportation sector.” This means that Railways will perhaps look at cutting the freight rates during the course of the year and expanding its business beyond the ten commodities that it mainly moves.

Prabhu also talked about “time tabled freight trains with credible service commitments,” by 2020. This is one way forward in order to take on competition from the road transport sector.

Passenger revenue of the Indian Railways during the course of this financial year is expected to be lower than what had been projected. The overall revenue expected from passengers was Rs 50,175 crore. The actual revenue earned came in 9.5% lower at Rs 45,376 crore. The revenue that was expected to be earned from second class passengers was at Rs 35,101 crore. It came in 12.5% lower at Rs 30,709 crore. This is another good data point which shows the slowdown in consumer demand in rural and semi-urban India, where Railways are still a major form of transportation.

It needs to be pointed out here that a passenger seat that is not booked in Indian Railways is essentially wasted. And given this, the Railways should look at more forms of dynamic pricing, instead of just trying to maximise revenues through the Tatkal ticketing system.

Given the fact that the revenue projections of Indian Railways went wrong the operating ratio of the Railways came in at 90% against the projected 88.5%. This essentially means that in order to earn Rs 100, the Railways ended up spending Rs 90, instead of the projected Rs 88.5. The operating ratio projected for next year is a high 92%, given that the recommendations of the seventh finance commission will have to implemented.

This will push up the salary and more importantly the pension bill of the Indian Railways. Also, the projections made by Prabhu for 2016-2017 are also optimistic, though not as optimistic as the ones he made in the last budget. He expects the freight revenue collections to go up by 5.4% to Rs 1,17,933 crore.

a slow growth in passenger revenues of 7.6% against the assumed 18.9%, and hence, is a little difficult to explain.
Not surprisingly, economist Bibek Debroy who also happens to be a member of the NITI Ayog told CNBC TV 18: “the projections last year were not very good and the projections this year are also somewhat optimistic.”

I agree with Debroy.

The column originally appeared on February 26, 2016 in the Vivek Kaul Diary.