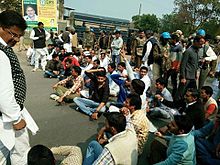 I normally do not write on political issues but the recent demand of the Jats of Haryana to be counted as other backward castes(OBCs), is a part of a larger issue that I have been writing about. Hence, this column.

Jats form 29% of Haryana’s population and own three-fourths of its land media reports point out. As Harish Damodaran writes in a brilliant column in The Indian Express: “The community probably owns three-fourths of agricultural land in Haryana, with the Jat being synonymous with the ‘zamindar’ just as much as the Bania with the trader.”

Given this, why do zamindars actually want reservation? Before I get around to answering this, it is important to understand how Jats ended up owning as much land as they do now.

As Surinder S Jodhka writes in Caste: “One of the most important developmental initiatives taken by the Indian State soon after independence was the introduction of Land Reform legislations. These legislations were designed to weaken the hold of the non-cultivating intermediaries (the so-called landlords) by transferring ownership rights to the tillers of the land.”

And how did this help the Jats? As Jodhka writes: “The Rajputs, traditionally upper-caste and the erstwhile landlords, possessed far less land after the Land Reforms than they had done before. Most of the village land moved into the hands of those who were traditionally identified as tillers of the land, the middle caste groups such as Jats and Gujars.”

This essentially ensured that Jats became what sociologist MN Srinivas called a dominant caste in the state of Haryana. As Srinivas wrote: “A caste may be said to be ‘dominant’ when it preponderates numerically over the other castes, and when it also wields preponderant economic and political power.” (As quoted in Jodhka’s book).

After land came the agricultural revolution which increased the crop yields and in the process increased the economic power of the Jats. Given their numbers, they already had the political power.

This explains why Jats have dominated the politics of Haryana for more than a few decades. It also explains why Manhohar Lal Khattar became the first non-Jat chief minister of Haryana in over two decades. And given that Khattar was a first time MLA with little administrative experience, he was caught napping as the movement built up all over the state.

One theory is that the movement was instigated by those not in power in the state. This might very well be true given the scale it finally reached, but it still doesn’t do away with the fact that Khattar was caught napping.

Now to answer the question that I had raised as to why do Jats wants reservation.

This is in line with the broader trend that prevails in the country. As per Agriculture Census of 2010-11: “The average size of holdings for all operational classes (small & marginal, medium and large) have declined over the years and for all classes put together it has come down to 1.16 hectare in 2010-11 from 2.82 hectare in 1970-71.” The situation could have only gotten worse since then. Hence, many more people are dependent on agriculture and farming than should be. This means lower income per capita from agriculture.

In this scenario, the importance of jobs has gone up. Nevertheless, as the Economic Survey released in February 2015 points out: “Regardless of which data source is used, it seems clear that employment growth is lagging behind growth in the labour force. For example, according to the Census, between 2001 and 2011, labour force growth was 2.23 percent (male and female combined). This is lower than most estimates of employment growth in this decade of closer to 1.4 percent.”

The jobs which would have moved people away from agriculture and farming have not materliased. Further, with 49.5% of government jobs being reserved (22.5% for SCs and STs, 27% for OBCs) the Jats (as well as others who fall in the general category) have probably found the competition to get into a government job very tough.

It further needs to be pointed out here that the government jobs at lower levels are significantly better paying than similar jobs in the private sector.

As the Report of the Seventh Pay Commission points out: “To obtain a comparative picture of the salaries paid in the government with that in the private sector enterprises the Commission engaged the Indian Institute of Management, Ahmedabad to conduct a study. According to the study the total emoluments of a General Helper, who is the lowest ranked employee in the government is Rs 22,579, more than two times the emoluments of a General Helper in the private sector organizations surveyed at Rs 8,000-9,500.”

Hence, the IIM Ahmedabad study “on comparing job families between the government and private/public sector has brought out the fact that…at lower levels salaries are much lower in the private sector as compared to government jobs.”

What this clearly tells us is that the reason Jats want to be categorised as OBCs is the same reason why engineers, MBAs and PhDs apply for government jobs at lower levels—they are significantly better paying than similar jobs in the private sector.

Further, what does not help is the fact that Haryana has the worst sex ratio in the country at 879 females for every 1000 males, as per the 2011 census. As Christophe Jaffrelot writes in The Indian Express: “The search for government jobs…is also influenced by their particularly skewed sex ratio. Parents of girls prefer grooms with stable income – those with government jobs are often their preferred choice. With fewer girls compared to boys in these castes, there is competition in the marriage market.”

The Haryana state government has plans of introducing a Bill to grant OBC status to Jats. This won’t go down well with 74 other castes who are already categorised as OBCs in Haryana. To them, Jats are the well-off land-owning people who really do not need any reservation. Also, with Jats forming 29% of the state’s population competition among the OBC aspirants for government jobs will go up significantly. The situation might become easier for the Jats but not for the castes categorised as OBCs as of now. Hence, be ready for another share of agitations.

Further, any attempt to categorise Jats as OBCs will lead to similar demand from other land-owning castes across the country who are seeing difficult days due to their land-holdings shrinking. In fact, similar demands have already been made by the Kapus in Andhra Pradesh, the Marathas in Maharashtra, the Patels in Gujarat (their leader Hardik Patel is currently in jail) and the Gujars in Rajasthan.

In fact, the Rajasthan government has already passed the Rajasthan Special Backward Classes (Reservation of Seats in Educational Institutions in the State and of Appointments and Posts in Services under the State) Bil, 2015. The Gujars are expected to be the main beneficiaries of this Bill.

In fact, at the heart of all this is an issue which I have discussed multiple times in the past. India has more people in agriculture than it needs. These people need to be moved away from agriculture. This needs the creation of many semi-skilled and unskilled jobs, something which is not happening, given that Indian industry is not exactly known to be labour-intensive. And the social consequences of this economic drawback are now coming to the fore.

The column originally appeared in the Vivek Kaul’s Diary on February 24, 2016