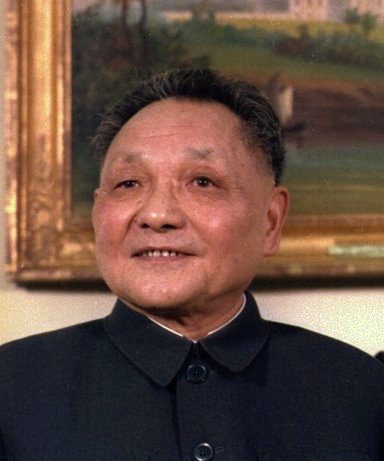 The Chinese economic growth story started in 1978 with Deng Xiaoping taking charge of the Chinese Communist Party. Interestingly, Xiaoping did not hold any official post. Nevertheless, he was looked upon as the Supreme Leader of China between 1978 and 1992.

Most accounts of China’s astonishing double digit growth for close to three decades give credit to Xiaoping for initiating Chinese economic growth and pulling out millions of people out of poverty in a very short period of time.

History when it gets written is built around the idea of Great Men doing great things. But things are never as simple as that.

As Matt Ridley writes in The Evolution of Everything: “If you examine closely what happened in China in 1978, it was a more evolutionary story than is usually assumed. It all began in the countryside with the ‘privatisation’ of collective farms to allow individual ownership of land and of harvests. But this change was not ordered from above by a reforming government.”

In the village of Xiaogang, 18 farmers came together. They despaired the dismal production of their farms under the collective system. And they did not like the fact that they had to beg for food from other villages. Given this, one evening they gathered together to figure out what they could do. This was at a time when even holding a meeting was considered a serious crime.

As Ridley writes: “The first, brave man to speak was Yen Jinchang, who suggested that each family should own what it grew, and that they should divide the collective’s land among the families. On a precious scrap of paper he wrote down a contract that they all signed…The families went to work on the land, starting before the official’s whistle blew each morning and ending long after the day’s work was supposed to finish.”

And this soon stared to show results. “Incentivised by the knowledge that they could profit from their work, in the first year they grew more food than the land had produced in previous five years combined,” writes Ridley.

Of course, the local communist party bosses soon came to know. The regional communist party chief intervened to save Yen and at the same time recommended that the same experiment should be copied elsewhere as well. “This was the proposal that eventually reached Deng Xiaoping’s desk. He chose not to stand in the way, that was all. But it was not until 1982 that the party officially recognised that family farms could be allowed – by which time they were everywhere,” writes Ridley.

The economic incentives of private ownership rapidly transformed farming in China and industry soon followed. While the Communist Party still continues to rule the country, the economic success of China wasn’t built on socialism. And there is a thing or two that Indian politicians can learn from this, given their obsession with socialism.

Private firms are normally better at running businesses than the government. This is something that politicians including prime minister Narendra Modi need to understand. As TN Ninan writes in The Turn of the Tortoise—The Challenge and Promise of India’s Future: “The last quarter century’s experience has shown that when the private sector is asked to provide telecom services, run airlines and airports, build and run ports, undertake banking, distribute electricity and even undertake water supply, the result is usually (though not always, for there is no shortage of private banks and airlines that have failed) a substantial improvement on what, the government was doing until then.”

As Ninan writes: “It is a matter of regret that Narendra Modi, who got elected on the promise of ‘minimum government, maximum governance’, has shown no taste for radical change or minimizing government…The government system continues to run loss-making airlines and hotels, three-wheeler units and Mahanagar Telephone Nigam.”

Also, in its effort to do everything, the government doesn’t pay adequate attention to many important areas. As Ninan writes: “There is too little of government attention paid to core areas like law and order, education and health—too few judges, too few teachers who teach, too few hospital beds; also too few trade negotiators and too few policemen, especially those with proper training. It should be obvious that there are many things that the state does inadequately or badly, and many tasks that the state has needlessly taken on itself.”

The second point here is that the government should be encouraging entrepreneurship in all possible ways. One point against entrepreneurship are India’s multiple labour laws. But they may not be as much of a problem as they are made out to be.

It is often argued that Indian entrepreneurs do not expand beyond a certain point because it is very difficult to fire workers once they have been taken on. The Chapter VB of the Industrial Disputes Act, 1947, makes it very difficult for companies with 100 employees or more, to fire an employee without the permission from the government. This, it is argued, prevents entrepreneurs from expanding.

Economist Pranab Bardhan makes an interesting point in Globalisation, Democracy and Corruption: “It is not clear that the rigid law on retrenchment is always the binding constraint on manufacturing expansion. Take the highly labour-intensive garments industry, for example. A combined dataset [of both the formal and informal sectors] shows that about 92 per cent of garment firms in India have fewer than eight employees…Labour law cannot discourage an eight-employee firm from expanding to an 80-employee firm since Chapter VB of the Industrial Disputes Act does not kick in until the firm reaches the size of 100 employees.”

So what is stopping these firms from expanding? “The binding constrains on the expansion of that eight-employee firm may have to do with inadequate credit and marketing opportunity, erratic power supply, wretched roads, bureaucratic regulations etc. There are good statistical studies by some economists which show that states with more rigid labour laws have had lower industrial growth and that labour laws can be a constraint. But these studies do not show that they are the only or even the main constraint,” writes Bardhan.

What this tells us very clearly is that the Modi government should work towards removing these binding constraints. This will allow entrepreneurship to flourish. That will lead to more jobs, better pays, higher spending and in the process, higher economic growth.
The column originally appeared on Vivek Kaul’s Diary on January 11, 2016