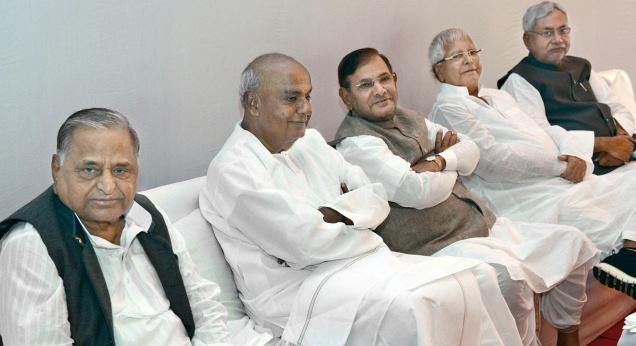 The year was 1977. The emergency had just ended. The opposition leaders who had been imprisoned during the course of the emergency had just released. They were holding a massive rally at the Ram Lila maidan.
It was a rainy day in Delhi and well past 9.30pm by the time Atal Bihari Vajpayee rose to speak. He was the star speaker for the evening and the people who had turned up at the rally had stayed back just to hear him.
To the shouts of “Indira Gandhi murdabad, Atal Bihari zindabad,” Vajpayee started his speech with a couplet:
“Baad muddat ke mile hain deewane,
Kehne sunne ko bahut hain afsane,
Khuli hawa mein zara saans to le lein,
kab tak rahegi aazadi kaun jaane.”
(It has been an age since we whom they call mad have had the courage to meet,
There are tales to tell and tales to hear,
But first let us breathe deeply of the free air,
For we know not how long our freedom will last). (Source: Tavleen Singh’s Durbar)

In the time to come all the major opposition parties came together and formed the Janata Party. This was the only way they could take on Indira Gandhi by ensuring that their votes did not split. The party won 295 seats in the Lok Sabha elections that followed and thus came to power. The largest number of 93 MPs were of the Jana Sangha (now the Bhartiya Janata Party) origin. Forty four MPs came from the Congress (O) party. Seventy one MPs came from Charan Singh’s Bhartiya Lok Dal. Jagjivan Ram’s Congress for Democracy brought in 28 MPs.
A large number of the Lok Sabha seats that the party won was limited to North India, given that the southern part of the country hadn’t really felt the ill-effects of the emergency implemented by Indira Gandhi as much as the north India had. Given this, Indira Gandhi’s Congress still managed to win 154 seats though they were wiped out in Uttar Pradesh with both Indira and her son Sanjay losing elections.
If one leaves out the Jana Sangha from this, the other parties were what we would call socialists, in the Indian sense of the term.
Nearly four decades later some of these socialists who were a part of the Janata Party have decided to come together again. This time to take on Narendra Modi. The parties which are merging together are Mulayam Singh Yadav’s Samajwadi Party, Lalu Prasad Yadav’s Rashtriya Janata Dal, Nitish Kumar’s Janata Dal(United) Indian National Lok Dal of Om Prakash Chauthala, Janata Dal(Secular) of HD Deve Gowda and Kamal Morarka’s Samajwadi Janata Party.
Mulayam Singh Yadav has been announced as the head of the party in Parliament, though its name and symbol haven’t been decided as yet. The Times of India reports that the party is likely to be called Samajwadi Janata Dal with the cycle as its symbol (which is the current symbol of the Samajwadi party).
So how strong a challenge is this new party going to be to Narendra Modi? Will it be as strong as the Janata Party was to Indira Gandhi? The first thing we need to understand is that the party has been formed when the next Lok Sabha election is still four years away.
After the merger, the party will have 15 members in the Lok Sabha, which is minuscule to the 295 members that the Janata Party had. In the Rajya Sabha the party will have 30 members. In that sense, the party will provide very little challenge to Narendra Modi.
Further, the support of all the parties which are coming together is heavily localized. Samajwadi Party is strong in Uttar Pradesh. The Indian National Lok Dal is strong in Haryana and Dev Gowda’s Janata Dal(Secular) is strong in parts of Karanatka. Hence, to that extent no consolidation of votes can be expected against Narendra Modi.
The only exception to this is Bihar. In Bihar, both Lalu’s Rashtriya Janata Dal(RJD) and Nitish’s Janata Dal (United)(JD(U)) are on a strong wicket. Data from the election commission shows that the combine of Bhartiya Janata Party (BJP) and Ram Vilas Paswan’s Lok Janshakti Party(LJP) got 35.8% of the votes polled during the Lok Sabha elections last year.
The RJD and the Congress Party which fought the elections together got 20.1% and 8.4% of the votes respectively. The Janata Dal(United) which fought the elections separately got 15.8% of the votes. Hence, the vote percentage of JD(U) + RJD matches that of the BJP + LJP. Further, RJD+JD(U)+Congress got more votes than BJP + LJP. Nevertheless, since RJD+ Congress and JD(U) were not in alliance, these votes did not translate into Lok Sabha seats.
Things changed in the by-elections to 10 assembly seats that happened in August 2014. In these elections the JD(U) came together with the RJD+Congress and took on BJP+LJP. The data from the election commission shows that the RJD+Congress+JD(U) got 45.6% of the total votes polled. The BJP+LJP got 37.9% of the votes polled. Given that, this time JD(U) was not fighting the elections separately, the votes polled translated into assembly seats as well, unlike the Lok Sabha polls. The RJD+ Congress+ JD(U) got six out of the ten assembly seats.
Hence, in Bihar, given the way the caste combinations work, the new Janata Party can be a potent force to take on Modi. The trouble is that Lalu and Nitish, despite the claims that they make in public these days, do not get along with each other.
Nitish became the Chief Minister of Bihar in 2005, more than three decades after he entered politics in the early 1970s. And for the first half of his political career, he propped up Lalu Prasad Yadav even though he knew that Lalu wasn’t fit to govern. Journalist Sankarshan Thakur puts this question to Nitish in his book Single Man: “Why did you promote Laloo Yadav so actively in your early years?” he asked.
And surprisingly, Nitish gave an honest answer. As Thakur writes “’But where was there ever even the question of promoting Laloo Yadav?’ he mumbled…’We always knew what quality of man he was, utterly unfit to govern, totally lacking vision or focus.”
So why then did Nitish decide to support him? “There wasn’t any other choice at that time,’ Nitish countered…’We came from a certain kind of politics. Backward communities had to be given prime space and Laloo belonged to the most powerful section of Backwards, politically and numerically.”
And this logic still continues to remain valid. The next assembly elections in Bihar are scheduled for later this year is in November 2015. And the chief minister’s post will be a bone of contention between Lalu and Nitish. It remains to be seen whether the new party will be able to survive this.
In other states the new party may be able to cause some damage to Modi only if it comes together with the Congress. To conclude, the biggest challenge for the party will be to survive till the next Lok Sabha elections in 2019.

The article originally appeared on Firstpost on April 16, 2015