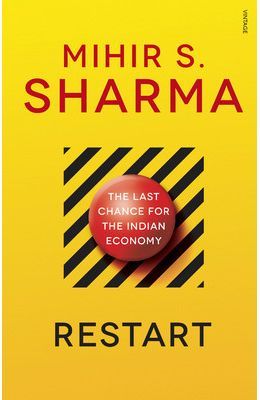 If you are a regular reader of the business press in this country, you would know that there is a marked tendency to give a “positive spin” to most things. “All is well,” is a mantra often espoused.
But anyone who has some understanding of the Indian economy, knows where to look for data and can look beyond the spin, would know that beneath all the foundation and the lipstick, there are big cracks. And these cracks might soon start to hurt.
Mihir S. Sharma’s Restart—The Last Chance For the Indian Economy is one big rant on those big cracks (and I mean it in a good way. If the business press is not ranting, someone’s got to rant). Sample this—Every year up till 2030, 13 million Indians will enter the workforce. To give each one of them a job, jobs need to grow by 3% per year. Since 1991, they have been growing only at 1.6% per year. In fact, as last financial year’s Economic Survey points out, for the shorter period between 2004-2011, the job growth has been at a minuscule 0.5% per year.
So, the pink papers may be jumping up and down about the huge number of jobs being offered by companies at college campuses, the overall reality is different.
Then there is the case of Indian agriculture employing too many people. As Sharma writes: “According to the last Census, in 2011, 55 percent of India—over half worked in agriculture. The sector, however, provided less than 15% of India’s gross national product. So, in other words, farms employed most of India’s people, but produced very little.” This has led to a situation where only 17% of the people who worked on farms survived only on money they made from their farm. Everyone else did some extra work.
The solution is to move people away from agriculture and into factories. Sharma suggests that the farmers understand this. Nevertheless, India is not building as many factories as it should. In fact, the manufacturing revolution has given this country a complete skip. As Sharma puts it: “We even sell the absence of a manufacturing sector as a brilliant innovation.”
And there are multiple reasons for why India does not really have a manufacturing sector. The labour laws suck, ensuring firms start small and continue to stay small. The crony capitalists are not used to paying for factors of production. And Indian politicians have never bothered to explain the importance of economic reform to the citizens of this country.
If India’s demographic dividend has to remain a demographic dividend this needs to be set right. Sharma goes into some detail explaining what needs to be done.
To conclude, Restart is a good read for any one wanting to know the real state of the Indian economy. On the flip side, in order to make the book read like an economic thriller, Sharma let’s the journalist in him overide the economist in him and makes way too many generalizations. That could have been avoided. At the same time a book of this kind could have done with a little more data and number crunching.

The review originally appeared in the Business World April 6, 2015

(Vivek Kaul is the author of Easy Money trilogy. He can be reached at [email protected])