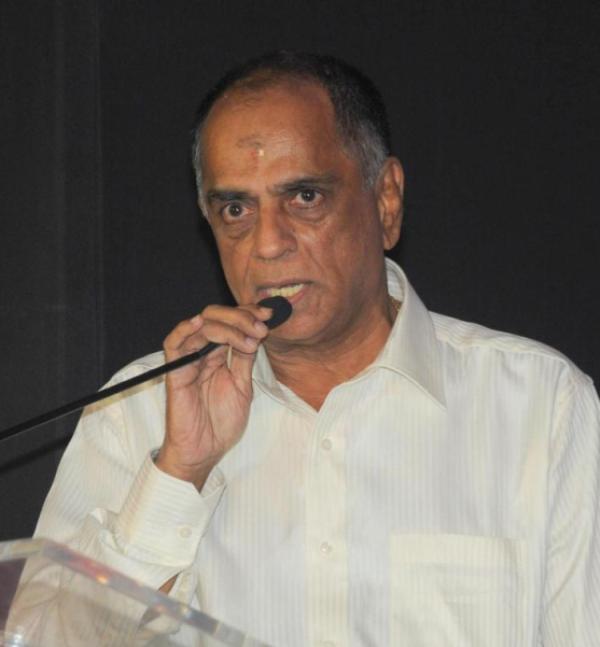 Pahlaj Nihalani, the censor board chief, has aspirations of becoming the conscience keeper of the nation. The former film producer has issued a list of Hindi and English cuss
words that will be banned from films.
Earlier this year Nihalani had told The Times of India that “there is too much nudity on television and internet and it should be controlled,” going beyond his brief as the censor chief. He had followed this with an interview to The Hindu in late January where he had said that he did not “mind being called conservative” if it was “in national interest”. “The censor board is very liberal. But what is the modern generation watching? We are giving them the license to see anything. How is this projecting our culture?” Nihalani had added in the interview.
The irony is that all this comes from a man who gave Hindi cinema some of its crassest songs. Nihalani produced a film called Andaz in 1994, which was directed by David Dhawan. The movie had songs with lines like khada hai khada hai khada hai, roz karenge hum ku ku and main maal gaadi tu dhakka laga (later changed to ye maal gaadi tu dhakka laga). Any one who understands a little bit of Hindi will know what exactly these songs are trying to suggest. They clearly were not in national interest.
Before Andaz, Nihalani had produced Aankhen which released in 1992. This movie had a song with the line “khet gayil baba bazaar gayil ma, akeli hu ghar ma tu aaja balma”. The song starts with the heroine Shilpa Shirodkar lifting her ghagra to reveal her thigh. It is followed by the heroine and a string of women extras gyrating their chests and doing other suggestive movements.
Aankhen also had another superhit song called O Lal Dupatte Waali Tera Naam to Bata. This song had the heroes Govinda and Chunky Pandey chasing the heroines Ritu Shivpuri and Raageshwari. Somewhere midway through the song the heroines sing the line “har ajnabi ke liye ye khidki nahi khulti” and in a very suggestive way slightly raise the hemline of their white mini skirts. This clearly wasn’t a good projection of Indian culture that Nihalani now seems to be so passionate about now. Nihalani might defend himself by saying that these songs were a part of a phase in Hindi cinema where double meaning songs ruled. Subhash Ghai’s Khalnayak had the superhit choli ke peeche kya hai. Sawan Kumar Tak’s Khalnayika went a step further and had a song called choli ke andar kya hai. Prakash Mehra’s Dalal had chadh gaya upar re aatariya par lautan kabootar re. So, Nihalani in a sense was doing what everyone else was doing during that era.
But all these years later he has changed, he might tell us. As a line attributed to the British economist John Maynard Keynes goes: “When the facts change, I change my mind. What do you do, sir?”
Nihalani might have changed his mind but he needs to do a few things to change the facts, so that we can believe him. He should re-censor the films he produced and drop the songs which go against Indian culture and national interest, to start with. Further, in this era of remakes, if he ever chooses to remake or sell the rights of his biggest hit Aankhen, he should insist that the remake won’t have the khet gayil baba bazar gayil ma song. This should set an excellent precedent. Nihalani would be then putting his money where his mouth is.
Until he does that, it is worth remembering a dialogue written by Akhtar-Ul-Iman and spoken by Raj Kumar in the 1965 superhit Waqt, which goes like this: “Chinoi Seth…jinke apne ghar sheeshe ke hon, wo dusron par pathar nahi feka karte(Chinoi Seth…those who live in glass houses don’t throw stones at others).” Nihalani, being a film producer, would have hopefully heard of this.

(Vivek Kaul is the author of the Easy Money trilogy. He can be reached at [email protected])
The column originally appeared in the Daily News and Analysis(DNA) on Feb 17, 2015