The Raghuram Rajan led Reserve Bank of India (RBI) has now more or less made it clear that it is likely to start cutting the repo rate from early next year. Repo rate is the rate at which RBI lends to banks and acts as a sort of a benchmark for the interest rates that banks pay on their fixed deposits and hence, charge on their loans.
The question to ask now is by how much will the RBI cut the repo rate by, as and when it does start to do so. The answer to the question is not very straightforward. As ex Federal Reserve chairman Ben Bernanke said in a speech December 2004, when he was a governor of the Fed, “If making monetary policy is like driving a car, then the car is one that has an unreliable speedometer, a foggy windshield, and a tendency to respond unpredictably and with a delay to the accelerator or the brake.”
Keeping this analogy in mind, let’s look at the accompanying table. Take a look at the green line and the red line. 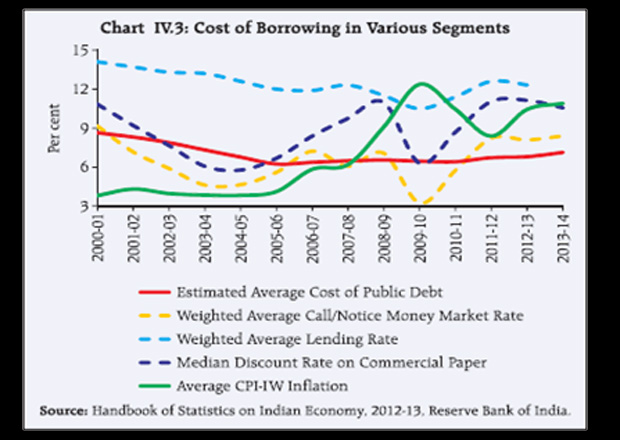 The green line is the inflation as measured by consumer price index. The red line is the average interest rate which the government has been paying on the money it borrows. In 2007-2008, the green line went above the red line and that’s how things stayed till 2013-2014.
What does this mean? This means that the government managed to borrow money at a rate of interest that was lower than the rate of inflation. Or as an economist would have put it, the government managed to borrow money at a negative real rate of interest.
As can be seen from the table, the difference between the rate of inflation and the average interest at which the government managed to raise debt was significant. Since the government was offering a lower rate of interest, it set the benchmark low. Even though banks had to borrow at a rate of interest higher than that of the government, it was still lower than the prevailing rate of inflation between 2007-2008 and 2013-2014.
This is how things have stood over the last few years. The situation has been reversed only over the last few months as inflation as measured through the consumer price index has fallen dramatically. And for the first time in many years, the rate of interest offered by banks on their fixed deposits is actually higher than the rate of inflation. The country has had to pay a huge cost for this scenario. The household financial savings have fallen dramatically over the last few years. The household financial savings rate was at 7.2% of the gross domestic product in 2013-2014, against 7.1% of GDP in 2012-2013 and 7% in 2011-2012. It had stood at 12% in 2009-2010. Financial savings did not exactly collapse because people ultimately need to save some money, but they came down nonetheless. Household financial savings is essentially the money invested by individuals in fixed deposits, small savings scheme, mutual funds, shares, insurance etc.
When individuals figured out that the interest rates offered on fixed deposits were lower than the rate of inflation, they started to looked at other avenues of investments where they could earn a higher return. One such avenue was gold. As the 2012-2013 Economic Survey had pointed out “The last three years have seen a substantial rise in gold imports (the value of gold imports increased nine times between January 2008 and October 2012)…Gold imports are positively correlated with inflation.”
Money invested in gold is essentially locked up. It is not available in the financial system to be loaned out. Further, the rise of Ponzi schemes was also linked to the era of high inflation. People moved their money into Ponzi schemes which promised a slightly higher rate of return than fixed deposits did. Money moved into real estate as well.
Given these reasons, it makes sense for the RBI to make sure that interest rates continue to be higher than the rate of inflation. This is one way of ensuring that household financial savings which have fallen dramatically over the last few years, start building up again. Also, this is one way of ensuring that money does not get locked up in the blackholes of gold and real estate, or is invested into Ponzi schemes.
So, this brings us back to the question, what should the repo rate cut be like? It actually depends on where the rate of inflation is in early 2015. RBI’s prediction is of consumer price inflation being at 6% in March 2015.
As Chetan Ahya and Upasana Chachra of Morgan Stanley write in a research note titled RBI Policy – Fight Against Inflation Over, Rate Cuts to Come: “We expect the central bank to follow a framework of keeping positive real rates to the tune of ~150-200 basis points[one basis point is one hundredth of a percentage]. As such, the key determinant of the magnitude of nominal rate cuts will be where inflation settles on a sustainable basis. In our base case, we expect inflation to reach the 6% level on a sustained basis by Mar-15 (same as the RBI). We thus assume 50bps policy rate cuts in 2015 in our base case.”
If the inflation falls to below than 6% then the rate could be higher.
To conclude, wherever the inflation lands up, the RBI must make sure that interest rates are higher than that.

The article originally appeared on www.FirstBiz.com on Dec 5, 2014