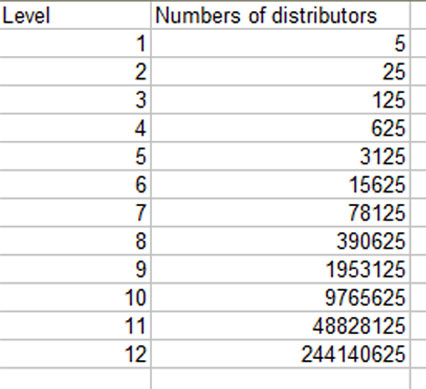 So we now have 125 distributors at the third level. If the chain continues, at the 12th level we will have around 24.45 crore distributors. This is equal to around 20% of India’s population. The total number of distributors will be around 30.51 crore.
What this simple example tells us is that it is difficult to keep appointing more and more distributors. This is similar to a Ponzi scheme, where for the scheme to keep going more and more newer investors need to keep coming in, so that the older investors whose money is falling due can be paid off. The trouble of course is that that the number of people is not infinite, as the above example shows us.
The problem for Amway distributors (or any other genuine MLM company) entering the game late is that it is difficult for them to sponsor new distributors. It is also difficult for them to sell Amway products given that there are so many distributors already operating in the market and they have selling relationships in place. Also, products sold by MLM companies typically tend to be more expensive than similar products being sold in the open market, making it more difficult to get customers willing to buy.
Hence, even in a legitimate MLM business like Amway, it is important to enter early. Those entering the business at the lower levels, find it difficult to get on new distributors and also end up with a lot of unsold inventory, thus leading to losses.
Amway requires its distributors to buy back unsold inventory from the new distributors that they sponsor. But that is easier said than done.
To conclude, an individual entering a legitimate MLM business at lower levels is likely to face losses and be unsuccessful at it. To that extent, even legitimate MLM businesses are similar to Ponzi schemes, where it is important to enter the scheme early. Also, like Ponzi schemes even legitimate MLM businesses project the prospect of unrealistically high returns while soliciting new distributors.

The article originally appeared on www.firstpost.com on May 28,2013