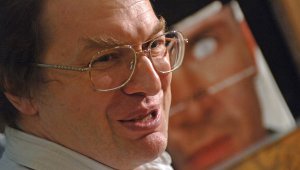 Vivek Kaul
Charles Ponzi, the man on whom Ponzi schemes have been named, has been dead for more than sixty years. And after all these years, it looks like that the world may have finally found a successor to Ponzi. His name is Sergei Mavrodi (featured above) and he is a Russian.
But before he get to Mavrodi, lets first try and understand what a Ponzi scheme is.
Charles Ponzi, an Italian immigrant into the United States, promised investors in the city of Boston that he would double their money (i.e. give them a 100% return on their investment) in 90 days.
Ponzi had hoped that to make this money through a huge arbitrage opportunity that he had spotted among the international postal reply coupons being sold across different countries. But due to various reasons both bureaucratic as well as practical, he could never get around to execution.
But by the time Ponzi realised this, big money was coming into his scheme and he had got used to a good lifestyle. At its peak, the scheme had 40,000 investors who had invested around $ 15 million in the scheme.
Ponzi kept his investors happy by using money brought in by the new investors to pay off the old investors who wanted to redeem their investment. And that is how the scheme operated upto a point. On 26th July 1920, the Boston Post ran a story questioning the legitimacy of the scheme. Within a few hours, angry depositors lined up at Ponzi’s door, demanding their money back. Ponzi asked his staff to settle their obligations. The anger subsided, but not for long. On Aug 10th, 1920, the scheme collapsed. The auditors, the newspapers and the banks declared that Ponzi was definitely bankrupt.
Ponzi was not the first person use this trick of using money being brought in new investors to pay off old investors. Neither was he the last.
Ponzi promised a 100% return to his investors in 90 days. But Sergei Mavrodi has managed to do evern better than Ponzi. His scheme MMM India (where MMM stands for Mavrodi Mondial Moneybox) is telling investors that their deposits will grow at 100% per month. Yes, dear reader, you read it right, 100% per month.
In fact as the following table on the webiste www.MMMindia.in shows, an investment of Rs 5000 made on April 15, 2013, is likely to grow to nearly Rs 3.4 crore in a year’s time. (You can check out the link here and even put in different amounts to see how much would it grow to at the rate of return of 100% per month).
Sum of deposit:   Rs 5000

Mavrodi brought MMM to India in 2011. The way it operates is very simple. The system is constructed around two concepts, give help and get help. So an individual logs on to the website www.mmmindia.in. Here he can help someone. To do this he needs to transfer money. This can be done through online banking, NEFT or even a direct cash deposit.
This amount is treated as a deposit in terms of a currency called Mavros, which is a virtual currency, whose exchange rate is decided personally by Mavrodi, twice a week on Tuesdays and Thursdays. This deposit in Mavros is supposed to grow at the rate of 100% per month.
Now if someone wants to sell these Mavros he needs to press the get help button. As the MMMIndia website points out “First the system calculates the amount of requests for payments (GET HELP button). And then, as per these calculations it will send request for transfers randomly to the participants (GIVE HELP button). Not necessarily, a request for transfer may or may not occur within a month.”
This basically means a couple of things. First you can get into the scheme anytime you want, but you can’t get out anytime you want. The second point is even more interesting. In order to get out of the scheme it is necessary that other people are willing to get into the Give Help mode. This means that they should be willing to transfer money from their account to your bank account.
This is like a classic Ponzi scheme where money being brought in by the newer investors (or more money being brought in by the older investors) is used to pay off those who want to exit the scheme.
In fact MMM India clearly shows on its website the structure of the way it operates.
This clearly tells you that pyramid structure that the scheme has. Also the scheme has no ‘supposed’ business model per se like a lot of other Ponzi schemes tend to have. In fact the website clearly points out “Do not forget this! There are no investments! No business activity! There is no company! There are no shares transactions, any relationship with the professional participants of the shares market, no shares or any product you do not get! Any source of income is ALSO NOT HERE!”
Despite this, the scheme has found many takers in India. As a recent article in the Business Standard points out “In India, adherents in the countryside of Maharashtra, Gujarat and Punjab are growing by the day. There are plans to take the network to other states.”
This is not the first time that Mavrodi has successfully launched a Ponzi scheme. He has done so in Russia in the past. The sudden switch from communism to capitalism in Russia created an unstable environment that made it ripe for running Ponzi Schemes.
MMM Corporation was the largest and the most famous of the lot. It was started by Sergei Mavrodi, a former mathematician, MMM issued share certificates which looked like bank notes. (These share certificates were not traded on any stock exchange).
Attracted by promised returns of 10% per week, the investors lapped up the share certificates. MMM became a market maker for these share certificates. The money collected by selling share certificates to the investors was not invested but essentially used to pay off the investors, selling the share certificates back to MMM. Effectively, money from the newer investors was used to pay off the older investors.
When questions were raised about the huge returns, it had promised, MMM stated that it had solid investments, but did not want to disclose them as its competitors might imitate its investment strategy. The returns offered were higher than those offered by Russian commercial banks, which were not very stable at that point of time. So many people withdrew their deposits from banks and bought share certificates issued by MMM. In the 1994 football World cup, which was held in the months of June-July in the United States of America, the Russian soccer team was sponsored by MMM. MMM advertisements ran extensively on state television and became very famous in Russia.
In July 1994, the Ministry of Finance warned investors about the unsustainibility of the scheme. This started a run on the scheme with investors dumping the share certificates enmasse. Soon the amount of money leaving the scheme was greater than the amount of money entering the scheme. On 26th July 1994, the share certificate scheme collapsed with all but one offices of the firm being closed down.
By getting elected to the Russian Duma, Mavrodi obtained immunity from prosecution, as per the Russian Constitution. After refusing to honour his previous commitments, Mavrodi decided to start a similar scheme which promised very high returns. Despite his past failure, many investors queued up to invest. In Oct 1995, Mavrodi was expelled from the Duma. He tried his best to get re-elected, but failed. A case was filed against him.
And it is the same Mavrodi who has now come to India to a run a Ponzi scheme. The beauty of this scheme is that he is even telling his potential customers that he is running a Ponzi scheme. But people being people, are still falling for it.
The article originally appeared on www.firstpost.com on April 15, 2013
(Vivek Kaul is a writer. He tweets @kaul_vivek)